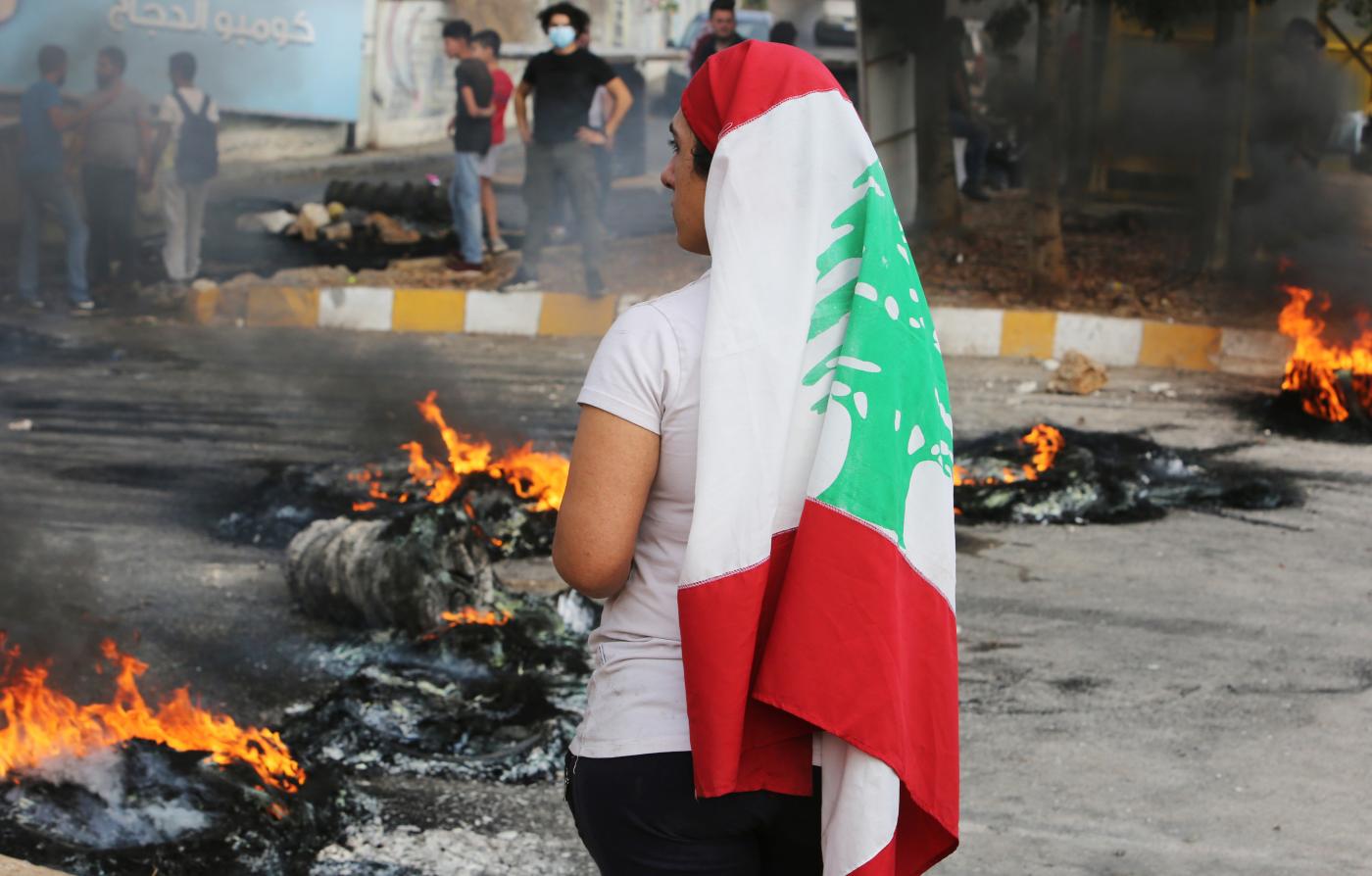 A demonstrator wearing a Lebanese flag stands near burning tyres blocking a street during a protest targeting the government over the economic crisis (Reuters)
Share:

Lebanon will be “another Iran-dominated, corruption-riddled failed state” if critical steps are not taken soon to end government corruption in the country, tackle the economic challenges it is facing and address the “crippling” issue of Hezbollah’s violence.

This is the conclusion of a report published on Tuesday by two leading Middle East think tanks based in Washington, the American Task Force on Lebanon and the Middle East Institute. To mark the occasion they hosted a webinar during which panelists discussed ways in which the report’s powerful conclusions might be implemented and order restored to Lebanon.

A major part of the discussion focused on the role of Hezbollah, and participants noted that the outcome of the ongoing US negotiations with Iran over its nuclear program could have significant ramifications for Lebanon.

Paul Salem, the president of the Middle East Institute, said Lebanon faces many challenges, including the failure to eliminate sectarianism over the past 31 years, but that a greater challenge is the continuing presence and power of Hezbollah as a non-state actor with allegiance to Iran.

“(A) crippling issue is the presence of Hezbollah,” he said. “This (Lebanese) government, no matter how they reform their government system, and no matter how much they are able to fight corruption or take some good decisions, the fact of the matter is the Lebanese state is not sovereign.

Salem said he does not see Hezbollah’s power in Lebanon changing, even if the US and Iran reach an agreement in Vienna.

In his introductory remarks, congressman Darrell Issa gave an assurance that the US remains committed to Lebanon and to the staging of “free and fair elections” scheduled for May for the parliament and later in the year for the presidency.

“If we don’t get the Iran deal correct, we have missed our best chance of dealing with this outside pressure on the country of Lebanon,” said Gabriel, referring to Hezbollah’s ties with Iran.

“The United States should realize they are in for some tough times by the Gulf, by Israel, by the Lebanese Americans if, in fact, they don’t deal with terrorism proxies in the region.”

Katulis said that the world must get past the idea that “Lebanon is lost.” He added that he hopes US President Joe Biden, who began his term in office by placing much focus on Iran and Yemen, will see that the future of Lebanon “is directly linked to the issue of Iran.”

AbiNader said that saving Lebanon is “critical to America.”

He added: “Without strong support from the United States and its friends, Iran and Syria would dominate Lebanon and likely pose increased terror threats to the United States. This does not serve American interests.”

The ATFL/MEI report highlights a number of hurdles that need to be cleared to improve the situation in Lebanon and end the crises it faces, and calls on Biden and the US to lead a “diplomatic coalition” to encourage the implementation of political and economic reforms.

All of the panelists agreed on the need to “significantly reduce corruption at all levels of government” in Lebanon.

*Ray Hanania is an award-winning Palestinian-American former journalist and political columnist. Email him at rghanania@gmail.com.