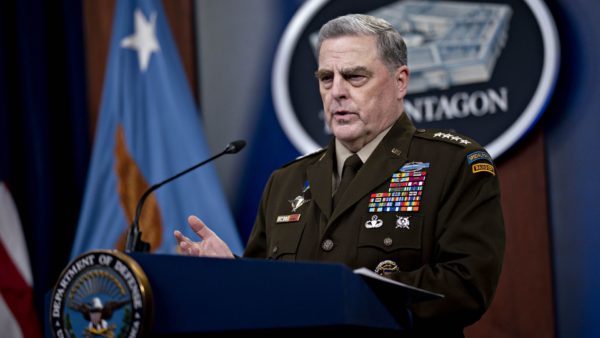 File photo of Gen Mark Milley, chair of the joint chiefs of staff, speaking at a news conference at the Pentagon in Arlington, Virginia, on Wednesday. Photo: Andrew Harrer/Bloomberg via Getty Images
Share:

US Chairman of the Joint Chiefs of Staff Gen. Mark Milley urges Russian President Vladimir Putin to pursue a diplomatic path to resolving the crisis. President Joe Biden poised to move thousands of US troops to NATO allies in Eastern Europe.

US President Joe Biden said Friday that he will move US troops to NATO allies in Eastern Europe in the coming days in what appears to be a new phase in the US response to the Russia-Ukraine crisis.

“I will be moving US troops to Eastern Europe in NATO countries in the near term,” Biden told reporters when asked about a timeline for moving the troops, adding that he did not have any updates on the situation in Ukraine.

A Pentagon spokesman told CNN that some 8,500 US troops had been placed on alert last week ahead of potential deployment to Eastern Europe – including units with “medical support, aviation support, logistical support” and “combat formation.”

US Chairman of the Joint Chiefs of Staff Gen. Mark Milley on Friday urged Russian President Vladimir Putin to pursue a diplomatic path to resolving the crisis, warning that a Russian invasion of Ukraine would be “horrific” for the country and would result in “significant” casualties.

“Given the type of forces that are arrayed … if that was unleashed on Ukraine, it would be significant, very significant, and it would result in a significant amount of casualties,” Milley said at a Pentagon press briefing.

“You can imagine what that might look like in dense urban areas, along roads, and so on and so forth. It would be horrific. It would be terrible. And it’s not necessary. And we think a diplomatic outcome is the way to go here.”

Meanwhile, Britain said Saturday that it is considering making a major NATO deployment as part of a plan to strengthen Europe’s borders in response to Russia massing troops on the border with Ukraine.

A government spokesperson said that any Russian incursion into Ukraine would be met with swift sanctions and would be devastating for both sides.

UK Prime Minister Boris Johnson is due to visit the region next week, and also will speak to Putin by phone, his office said, adding that Johnson is considering the biggest possible offer to members of the NATO defense pact in the Nordics and Baltics, which would double troop numbers and send defensive weapons to Estonia.

“This package would send a clear message to the Kremlin – we will not tolerate their destabilizing activity, and we will always stand with our NATO allies in the face of Russian hostility,” Johnson said in a statement.

“I have ordered our Armed Forces to prepare to deploy across Europe next week, ensuring we are able to support our NATO allies.”

Officials will finalize the details of the offer in Brussels next week, with ministers discussing the military options on Monday.

Stepping up diplomatic efforts after facing criticism for not doing enough, Johnson will make a second trip to meet NATO counterparts early next month, his office said.

Britain’s foreign and defense ministers will also both go to Moscow for talks with their Russian counterparts in the coming days, with the aim of improving relations and de-escalating tensions.