US to reroute $67m in aid towards Lebanon’s army 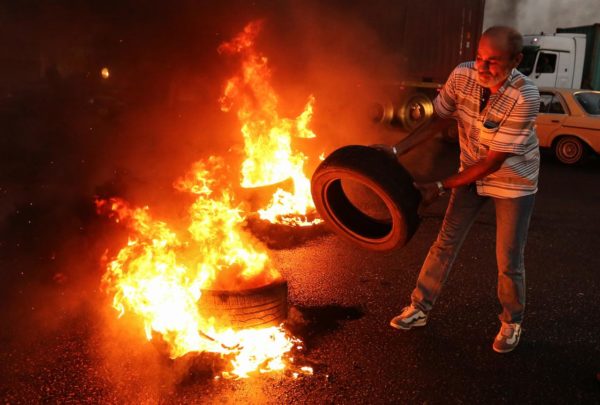 A Lebanese army veteran burns tires during a protest over a state budget that includes a provision taxing their pensions, in Naameh, south of Beirut, Lebanon June 27, 2019. Washington is the biggest foreign aid donor to Lebanon, which is facing its worst financial crisis in decades [File: Joseph Eid/AFP]
Share:

Discontent has been brewing in the security forces as Lebanon’s currency has slumped, driving down soldiers’ wages.

The United States plans to reroute $67m of military assistance for Lebanon’s armed forces to support members of the military as the country grapples with a debilitating financial crisis.

According to a notification sent to Congress, the State Department intends to change the content of previously appropriated foreign military funding for Lebanon to include “livelihood support” for members of the Lebanese military, citing economic turmoil as well as social unrest.

“It is in the United States’ national security interest to help these servicemen make ends meet and continue supporting the Lebanese people, and I’m really glad to see the administration putting our security assistance dollars to Lebanon toward that goal,” Murphy said in a statement.

Washington is the biggest foreign aid donor to Lebanon, which is facing its worst financial crisis in decades. The US provided $372m in humanitarian assistance to Lebanon last year, according to official figures.

In September, President Joe Biden cleared almost $50m in additional aid to the Lebanese armed forces in the form of military supplies. The move was intended to lessen the burden on the Lebanese army’s budget and allow it to disburse more of it on salaries.

Last year, Qatar announced that it would provide Lebanese armed forces with 70 tonnes of food a month for a year.

For over three years, Lebanon has been in throes of a crippling economic crisis that has decimated lives and livelihoods. More than three-quarters of the population now lives in poverty, while the Lebanese pound has lost 90 percent of its value.

The country’s economic collapse has been compounded in recent days by a looming political crisis that has Sunni Muslim leader and former Prime Minister Saad al-Hariri refusing to take part in the country’s upcoming political efforts.

The Hariri family has dominated Lebanon’s political landscape for more than three decades since the end of the country’s civil war in 1990.

According to Lebanon’s sectarian system, where parliamentary seats are allocated based on a sectarian quota, the prime minister must be a Sunni, the speaker a Shia and the presidency is held by a Maronite Catholic Christian.

Hariri said he took the decision to suspend his political career because he “was convinced there is no room for any positive opportunities to Lebanon due to the Iranian influence, our indecisiveness with the international community, internal divisions, and sectarian divisions”.

Discontent has been brewing in the security forces as Lebanon’s currency has slumped, driving down soldiers’ wages. Many have taken extra jobs, and some have quit