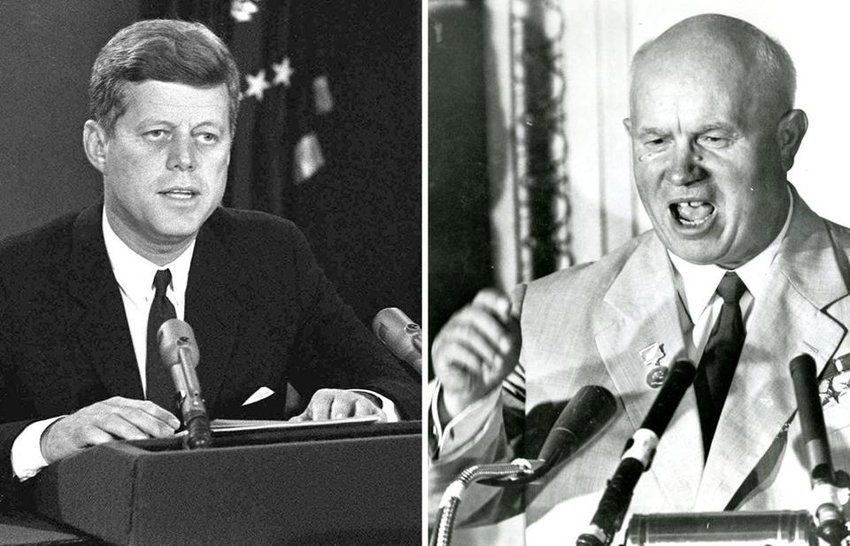 Russian President Vladimir Putin discussed a ‘strategic partnership’ with Cuba in the international arena in a phone call with Cuban President Miguel Díaz-Canel, the Kremlin has revealed.

The two leaders reaffirmed their ‘commitment to strengthen bilateral relations’, just days after fears were raised that Russia would deploy their military to Cuba and Venezuela if tensions with the US over Ukraine escalated.

It comes against the backdrop of Russia’s build-up of 100,000 troops, as well as tanks and missiles, on its border with Ukraine, which has sparked fears of a war in Europe and a standoff between East and West.

Díaz-Canel said he and Putin had a ‘cordial and fruitful’ conversation on Monday morning, with both leaders discussing the ‘excellent state of relations’ between Cuba and Russia.

They also spoke about the ‘future development of bilateral collaboration’ in various fields, Díaz-Canel said, without expanding.

The call comes mere days after Cuba and Venezuela were dragged into the dispute between Russia and the West.

Moscow’s Deputy Foreign Minister Sergei Ryabkov said he could ‘neither confirm nor exclude’ the possibility of Russia sending military assets to Latin America if the U.S. and its allies don’t curtail their military activities on Russia’s doorstep.

‘It all depends on the action by our U.S. counterparts,’ the minister said in an interview with Russian television network RTVI, citing Russian President Vladimir Putin’s warning that Moscow could take unspecified ‘military-technical measures’ if the U.S. and its allies fail to heed its demands.

U.S. national security adviser Jake Sullivan dismissed the statements about a possible Russian deployment to Cuba and Venezuela as ‘bluster in the public commentary.’

He said that ‘if Russia were to move in that direction, we would deal with it decisively’.

U.S. officials said the potential deployments to the Latin American countries have not come up during talks held between the U.S., Russia and other NATO countries.

Russia has massed 100,000 troops on the Ukrainian border and issued a list of security demands to the US and its NATO allies.

The alliance has described most of the list – including a ban on Ukraine joining and the withdrawal of troops from ex-Soviet states – as ‘non-starters’, though high-level talks are ongoing with the US due to provide written responses this week.

America has warned Russia of a ‘swift and severe’ response if it invades Ukraine, which would include a dramatic escalation of sanctions against the country.

The US is also thought to be considering military options to deter Putin, short of a direct confrontation between Russian and American troops.

Pentagon officials presented one plan to Joe Biden during a summit at the weekend, which would see between 1,000 and 5,000 US troops deployed to Baltic states Lithuania, Estonia and Latvia, which border Russian territory.

Troop numbers could then be increased up to 50,000 if the security situation deteriorates, backed up by fresh deployments of ships and aircraft.

The plan would not involve American troops deployed directly to Ukraine, with Biden thought to be loathe to enter another conflict following his disastrous withdrawal of US troops from Afghanistan last year, the New York Times reports.

Biden could make a call on military measures as soon as this week.

Russia last month warned the escalating tensions with the US over Ukraine risked repeating the 1962 Cuban missile crisis.

‘You know, it really could come to that,’ Ryabkov said.

‘If things continue as they are, it is entirely possible by the logic of events to suddenly wake up and see yourself in something similar.’

He was referring to the 1962 standoff between the United States and the Soviet Union that brought the world to the brink of nuclear war.

The Cuban missile crisis was triggered by the stationing of Soviet nuclear missiles on the Caribbean island and prompted the US to impose a naval blockade to prevent Moscow shipping in more.

It was defused when Soviet leader Nikita Khrushchev agreed to dismantle and remove the nuclear weapons in return for a pledge by U.S. President John F. Kennedy not to reinvade the Communist island and remove US missiles from Turkey.

It comes as NATO chief Jens Stoltenburg confirmed yesterday that the alliance will be beefing up its own presence in the region, with additional ships and fighter jets deployed.

Denmark is sending a frigate to the Baltic Sea and deploying F-16 war planes to Lithuania.

Stoltenberg said NATO will ‘take all necessary measures to protect and defend all allies.’

He added: ‘We will always respond to any deterioration of our security environment, including through strengthening our collective defense.’

Russia also added coal to the fire yesterday after Moscow announced the country will hold live-fire naval drills off the coast of Ireland next month.

Battleships will take part in sea drills around 150 miles off Ireland’s southwest coast, within the country’s ‘exclusive economic zone’ but outside its territorial waters.

Foreign Minister Simon Coveney revealed on Monday that Russia informed Ireland about the drills at the weekend, saying the warships are ‘not welcome’ but his country ‘doesn’t have the power to stop this from happening’.

Under UN conventions governing the oceans, military drills are allowed within the economic zones of other states provided they do not stray into territorial waters.

The drill will form part of much broader Russian naval exercises involving 140 ships and 10,000 troops from all of its naval fleets that will take place in the Atlantic, Pacific, Mediterranean, North Sea and Sea of Okhotsk from January until February.

The Cuban missile crisis brought the world as close as it has ever been to nuclear war in October 1962.

After America’s failed attempt to overthrow Fidel Castro, the Cuban strongman allowed the Soviet Union to deploy nuclear missiles in Cuba – putting the warheads in easy striking distance of most of the US.

If Russia chose, it could launch the missiles at the US before Washington had a chance to retaliate.

America had already deployed ballistic missiles in Italy and Turkey – putting them within easy striking distance of Moscow.

President John F Kennedy informed Americans during a television broadcast on October 22, 1962, that the Soviets had placed missiles on Cuba and that in retalation, the US would erect a blockade around the island to force Castro and Khrushchev to remove to missiles.

He announced America would be willing to use military force if necessary to deter what was seen as a threat to national security – and the world waited with baited breathe.

On October 24, 1962, another key moment came when Soviet ships heading for Cuba neared the line of U.S. vessels enforcing the blockade. An attempt to breach the blockade would most likely have resulted in a military stand-off, but Soviet ships backed down.

A flashpoint which could have triggered all-out war was when an American reconnaissance plane was shot down on October 27, 1962.

A U.S. invasion forces readied itself for an invasion of Cuba but were eventually stood down.  The 35-year-old pilot of the downed plane, Major Rudolf Anderson, is considered the sole U.S. combat casualty of the Cuban missile crisis.

Throughout the tense stand-off, Khrushchev and Kennedy were in contact to try to avoid any military escalation between the two superpowers. On October 26, 1962, Khrushchev sent a message to Kennedy in which he offered to remove the Cuban missiles in exchange for a promise by U.S. leaders not to invade Cuba.

The following day, Khrushchev sent a letter proposing that the USSR would dismantle its missiles in Cuba if the Americans removed their missile installations in Turkey.

Secret negotiations between Soviet leader Nikita Khrushchev and JFK and between his brother Robert Kennedy, the Attorney General, and Soviet ambassador Anatoly Dobrynin led to a deal. U.S. Secretary of Defense Robert McNamara said after the incident it would be the ‘last Saturday he would ever see’ as tensions continued to escalate.

The Soviets agreed to withdraw their missiles in return for America pledging not to invade Cuba. The US also secretly promised to remove obsolete missiles from Turkey.  Both sides claimed victory as a way of putting a positive PR spin on the crisis.