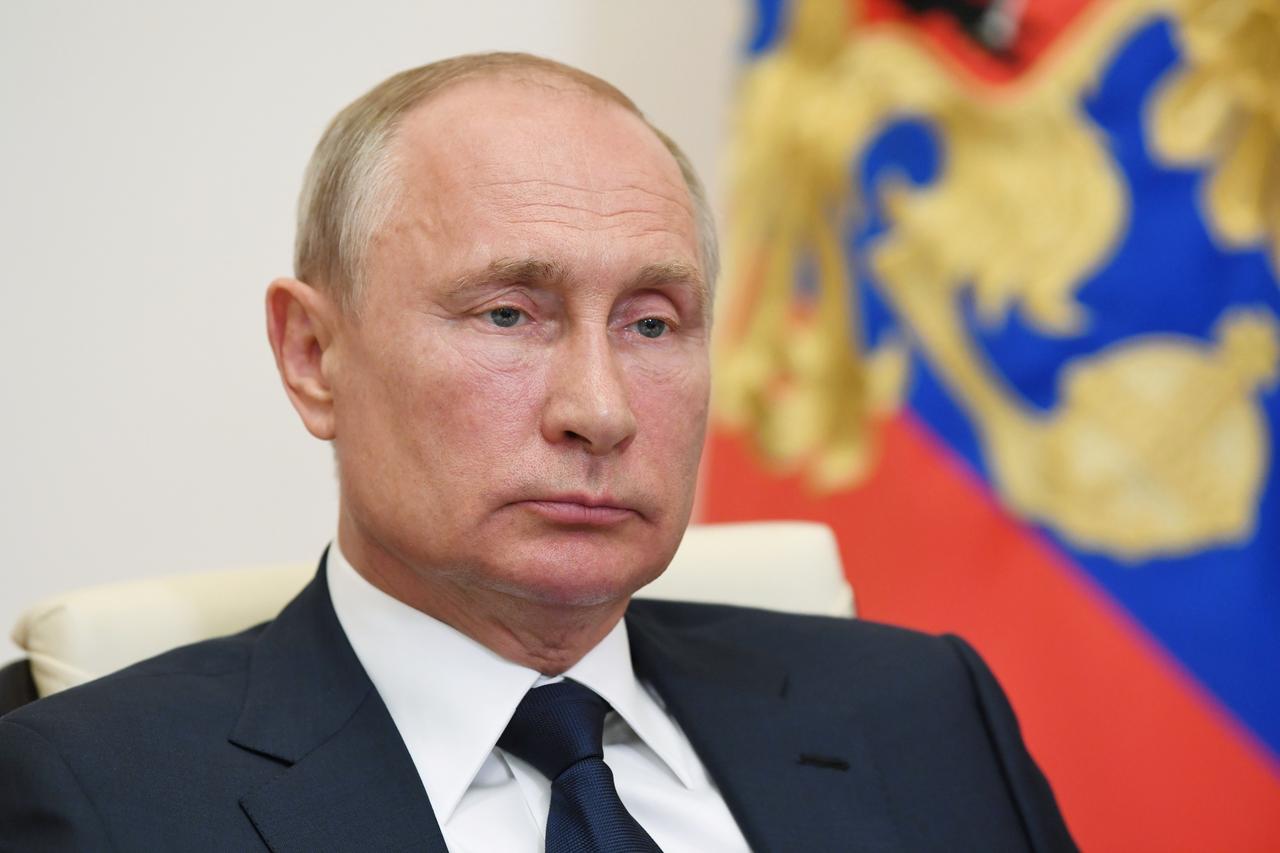 File photo of Russian president President Vladimir Putin . The UK foreign office said in a Saturday statement it has information that the Russian government is planning to “install a pro-Russian leader in Kyiv as it considers whether to invade and occupy Ukraine.” Similarly US Secretary of State David Blinken accused Russia of recruiting officials in attempt to take over Ukrainian government .Putin has massed tens of thousands of troops near the Russia-Ukraine border, leading to fears of an invasion. The West has rejected Moscow’s main demands — promises from NATO that Ukraine will never be added as a member, that no alliance weapons will be deployed near Russian borders, and that it will pull back its forces from Central and Eastern Europe.
Share:

The UK foreign office said in a Saturday statement it has information that the Russian government is planning to “install a pro-Russian leader in Kyiv as it considers whether to invade and occupy Ukraine.”

“The former Ukrainian MP Yevhen Murayev is being considered as a potential candidate,” the British Foreign, Commonwealth and Development Office said. Murayev told CNN Saturday “there is nothing to comment on” regarding the allegations, as he is a Ukrainian national and still facing Russian sanctions.

“Some of these have contact with Russian intelligence officers currently involved in the planning for an attack on Ukraine,” the British foreign office statement added.

Russia has denied allegations it is planning to attack Ukraine.

“The misinformation spread by the British Foreign Office is another evidence that these are the NATO countries, led by the Anglo-Saxons, that are escalating tensions around Ukraine. We call on the British Foreign Office to stop provocative activities, stop spreading nonsense and focus on studying the history of the Tatar-Mongol yoke,” a representative of the Russian Foreign Ministry told TASS.

CNN reached out to the UK foreign office on Saturday forfurther comment on its claims,as well as supporting evidence, but it said it would not comment any further.

“The information being released today shines a light on the extent of Russian activity designed to subvert Ukraine, and is an insight into Kremlin thinking,” UK Foreign Secretary Liz Truss said in a statement.

“Russia must de-escalate, end its campaigns of aggression and disinformation, and pursue a path of diplomacy,” Truss said. “As the UK and our partners have said repeatedly, any Russian military incursion into Ukraine would be a massive strategic mistake with severe costs.”

On Twitter, Truss said: “We will not tolerate (a) Kremlin plot to install pro-Russian leadership in Ukraine.”

CNN also reached out to the US State Department and the White House for comment.

US has ‘same information’ as UK, source

The President was briefed on the state of Russian military operations on Ukraine’s borders and “discussed both our ongoing efforts to de-escalate the situation with diplomacy and our range of deterrence measures that are being coordinated closely with our Allies and partners, including ongoing deliveries of security assistance to Ukraine,” it added.

“President Biden again affirmed that should Russia further invade Ukraine, the United States will impose swift and severe consequences on Russia with our Allies and partners,” the White House said.

A source briefed on the US and British intelligence confirmed the US has similar evidence as the UK, regarding Russia’s plot to install a friendly government in Ukraine.

“Yes, we have seen the intelligence that Russia is looking at ways to minimize a long, drawn out war. That includes things like installing a friendly government and using its spy agencies to foment dissent,” the source said.

Another source briefed said the US “has the same information.”

Russia has previouslybeen accused of attempting to sow chaos in Ukraine through cyberattacks and, purportedly, plotting to take control of the government in Kyiv. But the Kremlin has repeatedly denied it is planning to invade.

CNN previously reported the US accused Russia of recruiting current and former Ukrainian government officials to attempt to take control of Ukraine’s government as it unveiled new sanctions on Thursday.

Sivkovich was the only former Ukrainian politician named in both the US and UK announcements.

The Treasury said the four individuals — two of whom are current members of Ukraine’s Parliament — were acting under the direction of a Russian intelligence service sanctioned by the US and played “various roles” in Russia’s “global influence campaign to destabilize sovereign countries in support of the Kremlin’s political objectives.”

US National Security Council Spokesperson Emily Horne expressed solidarity with Ukraine as the UK Foreign Office said it had information the Russian government is planning to install a pro-Russian leader in Ukraine, calling the plot “deeply concerning.”

“This kind of plotting is deeply concerning,” Horne said. “The Ukrainian people have the sovereign right to determine their own future, and we stand with our democratically-elected partners in Ukraine.”

That comes asNATO members Romania and Bulgaria slammed Russia’s demand to remove alliance troops from both countries as “unacceptable,” with each arguing that the Kremlin has no right to interfere in the foreign policy decisions of other sovereign states.

The comments from both countries came just hours after Russia’s Foreign Ministry confirmed its demand for NATO to pull back troops from parts of eastern Europe included Bulgaria and Romania. The two countries are located on the Black Sea, which analysts believe Moscow sees as an important geostrategic buffer zone between itself and Europe.

Romania’s Ministry of Foreign affairs said in a statement Saturday “such a demand is unacceptable and cannot be negotiated.” Bulgaria’s Ministry of Foreign Affairs urged Moscow to “to show respect to the foreign policy choice consciously made by Bulgaria.” Bulgaria’s ambassador to the United Kingdom, Marin Raykov, told the BBC the Kremlin’s demand is “an expression of contempt for the sovereign rights of Bulgaria to choose the sources of guarantees for national security.”

Russia and NATO have been at loggerheads since late last year, when the Kremlin deployed an estimated 100,000 troops to its border with Ukraine. That military posturing has prompted fears that Russia is planning another incursion into Ukraine after invading and illegally annexing the Crimean peninsula in 2014. That same year, Moscow began supporting a pro-Russian separatist movement in eastern Ukraine that’s left thousands dead.

In its statement, Romania said the NATO military presence in eastern Europe is “a strictly defensive reaction to the increasingly aggressive behavior of the Russian Federation … which started in 2014. when the Ukrainian territory Crimea was illegally occupied by Russia.”

“This behavior continues to intensify in the present, despite NATO’s attempts to engage in constructive dialogue,” the statement read.

The United States and its NATO allies have repeatedly warned Russia any movement of its troops into Ukranian territory would be met with what US Secretary of State Antony Blinken called “a severe and a united response.”

Russian President Vladimir Putin has argued in recent weeks that his country is the aggrieved party, and is responding to NATO’s cooperation with Ukraine and the alliance’s eastward expansion since the fall of the Soviet Union — which Russia views as an existential security threat.

Diplomats from all sides have been attempting to negotiate a peaceful settlement, though one of Russia’s core demands — that NATO withdraw foreign military forces and equipment from members of the alliance who joined after 1997 — was quickly deemed a non-starter by Western diplomats.

NATO members have, in recent days, deployed military equipment and personnel to eastern alliance members in response to Russia’s troop buildup in Ukraine.

The Dutch Defense Minister said the Netherlands would deploy two F-35 jets, along with support staff, to Bulgaria in April or May, while the Spanish Defense Minister offered to send fighter jets and a warship to the Black Sea.

The alliance has also begun sending weaponry to Kyiv to deter a potential Russian invasion and strengthen Ukraine’s defensive capabilities.

Germany will supply a fully equipped field hospital to Ukraine, according to the German Defense Ministry. The country has traditionally avoided exporting arms to crisis areas since World War II, but German Foreign Minister Annalena Baerbock said earlier this week that “all measures” will be on the table if there is further Russian aggression against Ukraine.

The US Embassy in Kyiv said Friday that the first shipment of American-directed materiel — 200,000 pounds of lethal aid, including ammunition for fighters on the front lines — has arrived in Ukraine.

Though US President Joe Biden ruled out sending American combat troops to Ukraine, Washington has approved the shipment of US-origin weapons to Kyiv — including highly sought-after American anti-aircraft systems from Latvia and Lithuania. Those armaments would help Ukraine fend off Russian aircraft that, some officials and experts believe, would lead the way in the early stages of a Russian invasion. Estonia was given approval to transfer anti-tank Javelin guided missile systems, which the US has provided Ukraine with in the past.