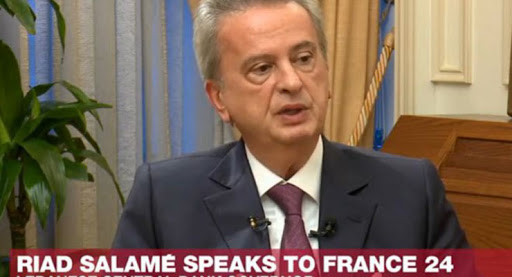 File photo of Lebanon’s Central Bank Governor Riad Salameh . He is the target of a series of judicial investigations in Lebanon, Switzerland and France on suspicion of fraud, money laundering and illicit enrichment, among other allegations. It appears that Salameh is now trying to disqualify the prosecutor in Lebanon , like Hezbollah did with the chief investigator of the port blast Joseph EID AFP
Share:

Salameh is among the top Lebanese officials widely blamed for the country’s unprecedented financial crisis that the World Bank says is of a scale usually associated with wars.

He is the target of a series of judicial investigations in Lebanon, Switzerland and France on suspicion of fraud, money laundering and illicit enrichment, among other allegations.

Salameh has repeatedly denied the accusations.

Next week, Jean Tannous, the Lebanese prosecutor leading a local probe into Salameh, and Raja Hamoush, another Lebanese judge, will meet with French authorities, the judicial source told AFP.

The visit “will focus on cooperation and exchange of information between the two sides regarding suspicions around Salameh and some of his close associates with regards to… money laundering, illicit enrichment,” among other crimes, the judicial source added, without specifying the exact date of the meeting.

France had opened a probe into Salameh’s personal wealth in May 2021 following a similar move by Switzerland.

On July 2, France’s Financial Prosecutor’s Office (PNF) handed over its findings for judicial inquiry into allegations of aggravated money laundering.

Lebanon opened a local probe into Salameh’s wealth last year, after the Swiss attorney general requested assistance in an investigation into more than $300 million which Salameh allegedly embezzled out of the central bank with the help of his brother, Raja.

As part of Lebanon’s investigation, authorities are trying to secure bank statements of Raja Salameh but they have been rebuffed under the pretext of banking secrecy laws.

Last week, a Lebanese judge issued a travel ban against Salameh over a lawsuit filed by activists accusing him of financial misconduct.