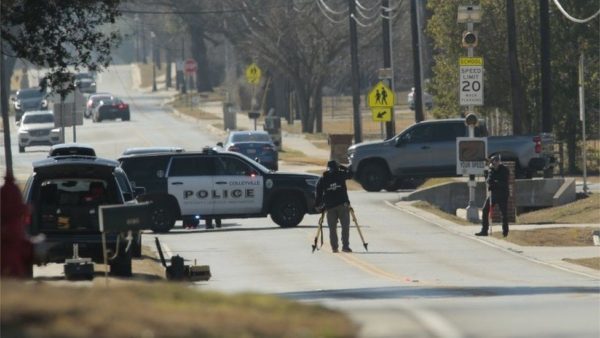 Police continued their investigation at the scene of hostage incident in Colleyville, Texas, on 16 January 2022
Share:

Two teenagers have been arrested in England as part of the investigation into a hostage-taking incident at a synagogue in Texas on Saturday.

British citizen Malik Faisal Akram, 44, from Blackburn, was shot dead after a standoff with police in Colleyville.

Details of the ages or genders of the pair arrested in south Manchester on Sunday evening were not revealed.

Greater Manchester Police said it was liaising with local communities and continuing to assist in the US inquiry.

The force said the two teenagers were arrested “as part of the ongoing investigation into the attack” and were being held in custody for questioning.

According to US police sources, Akram arrived in the country via New York’s JFK International Airport two weeks ago.

Akram’s brother Gulbar confirmed his death in a statement carried on the Blackburn Muslim Community Facebook page. He apologised to the victims and said his brother had been suffering from mental health issues.

The Metropolitan Police earlier confirmed counter-terror officers were in contact with US authorities and the FBI.

The siege began at around 11:00 local time (16:00 GMT) when police were called to the Congregation Beth Israel synagogue in the suburb of Dallas.

Akram gained initial access to the synagogue during the service by claiming to be a homeless man, according to a police source quoted by CBS.

Among the hostages was the synagogue’s rabbi. One was released after six hours with the other three being led to safety by police several hours later.

All of the hostages were freed unharmed.

US President Joe Biden called the hostage-taking an “act of terror” and the UK condemned the attack.

British Foreign Secretary Liz Truss described it as an “act of terrorism and anti-Semitism”.

Ms Truss said: “We stand with US in defending the rights and freedoms of our citizens against those who spread hate.”

The hostage-taker was heard demanding the release of Aafia Siddiqui, a Pakistani neuroscientist who is currently serving an 86-year term in a prison in Forth Worth, Texas, about 20 miles away from the synagogue, law enforcement officials told local media.

President Biden appeared to confirm the attacker had been seeking her release, saying the Texas attack was related to “someone who was arrested 15 years ago and has been in jail for 10 years”.

The president said the attacker had apparently bought weapons after he landed in the US.

Police sources say that no explosive material was found on Akram and US federal courts do not show he had any criminal history.

Akram’s brother said he had liaised “with Faisal, the negotiators, FBI etc” during the siege but “there was nothing we could have said to him or done that would have convinced him to surrender”.

Gulbar added: “We would like to say that we as a family do not condone any of his actions and would like to sincerely apologize wholeheartedly to all the victims involved in the unfortunate incident.”

“We would also like to add that any attack on any human being be it a Jew, Christian or Muslim etc is wrong and should always be condemned.”