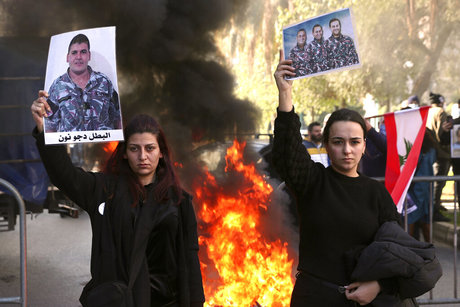 Relatives of victims of the Aug. 4, 2020, Beirut port explosion hold up portraits of their loved ones who died in the explosion, during a sit-in outside the Justice Palace in Beirut, Lebanon, Monday, Jan. 17, 2022. Dozens of Lebanese, including families of the Beirut port explosion victims, rallied Monday outside the Justice Palace in support of the judge investigating the blast after he was forced to suspend his work. (AP Photo/Bilal Hussein)
Share:

BEIRUT, Jan 17 (Reuters) – An investigation into the devastating 2020 explosion at Beirut port, which has struggled to make progress amid resistance from top politicians, may face a further obstruction to its work that could leave the probe in limbo by preventing any indictments.

Judge Tarek Bitar’s investigation into the massive blast, which killed at least 218 people and deepened Lebanon’s economic crisis, has been suspended repeatedly by lawsuits brought by senior politicians who he has sought to question.

Hezbollah, an Iran-backed powerful group with an armed militia, has led the campaign to remove Bitar, accusing him of bias after he pursued some of its political allies.

In the latest twist, a lawsuit brought by former minister Youssef Finianos, one of the senior figures Bitar wants to interrogate, has been left in limbo by the retirement last week of Judge Roukoz Rizk, who was hearing it, judicial sources say.

“While this lawsuit is not decided, the investigating judge cannot issue the indictment,” a judicial source said.

There can be no ruling in the case, which the source said accuses Bitar of “a grave error” in conducting the probe, until a replacement is found for Rizk, who reached mandatory retirement age.

Politicians typically pick judges in Lebanon, which Nizar Saghieh of watchdog Legal Agenda said could allow them to leave the position open and the case pending.

Such a move could stymie the probe.

Bitar’s opponents accuse him of bias and of overstepping his powers. His supporters see his efforts as a bold attempt to hold senior officials to account in a country where impunity has been entrenched since the end of the 1975-1990 civil war.

The investigation is currently frozen due to a separate lawsuit.

Families of blast victims protested outside the Beirut headquarters of the judiciary on Monday to demanding the probe move more quickly and for the swift replacement of Rizk.

“We want to reach justice, we don’t want to wait for years,” said Kayan Tlais, who lost his brother in the blast.

Hezbollah and its allies had been boycotting cabinet meetings for three months, saying they wanted Bitar removed. On Saturday, a few days after Rizk retired, the group and its allies said they were ending the boycott.

Heiko Wimmen of Crisis Group ( an independent organization working to prevent wars and shape policies that will build a more peaceful world) described the lawsuits that have been hindering progress as “legal theatre” and said obstructing the probe would further damage public trust in the nation’s institutions.

“It’s very clear that Judge Bitar will not be allowed to summon anybody, let alone indict anybody,” he said. “Whoever doesn’t want this investigation to go anywhere has succeeded in that.”