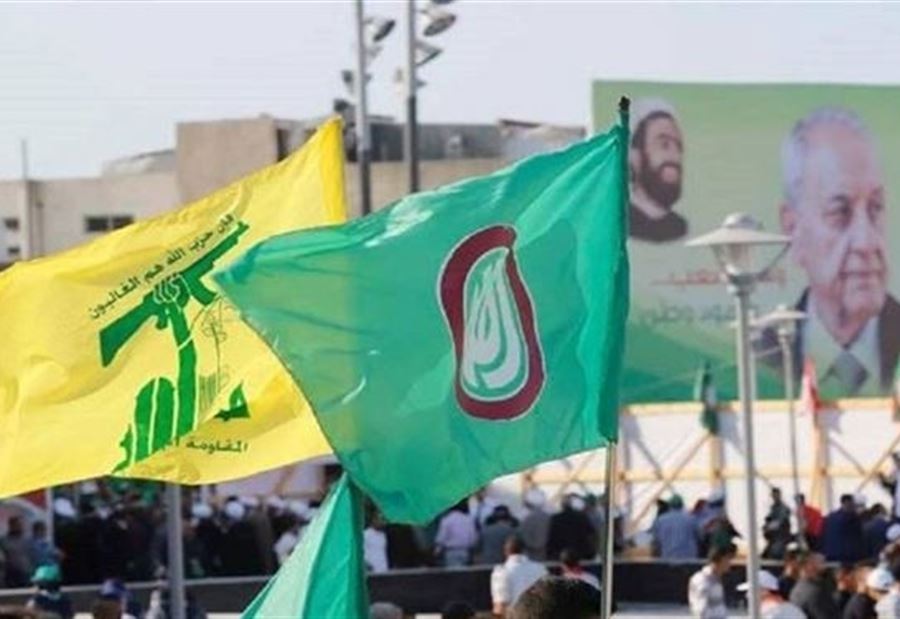 Flags of the Iranian backed Hezbollah militia L and the Amal Movement
Share:

Sources of the Hezbollah , Amal alliance which is referred to as the Shiite duo decried the statement made by Prime Minister Najib Mikati during his visit to the Baabda palace about an imminent Cabinet session as “only wishful thinking .”

Nidaa al-Watan newspaper was told by the sources in remarks published Monday, that Mikati will not call for a Cabinet session without the Shiite approval, and “no consensus has been reached yet.”

“It is nothing more than wishful thinking ” the sources were quoted as saying .

This development comes after Lebanese media reported on Sunday that Mikati has firmly resolved to call for a Cabinet session to discuss the 2022 draft state budget, which should be finalized by the Finance Ministry in the coming days,

Ad-Diyar newspaper quoted informed sources as saying Mikati is closely following up on the Finance Ministry’s efforts to finalize the draft state budget, which has become in its final stages.”

“He will meet with Finance Minister Youssef al-Khalil ( a close aid of Speaker Nabih Berri ) ahead of the submission of the draft to the Premiership,” the sources added.

“Once this happens, PM Mikati will call for a cabinet session aimed at discussing the state budget and his decision is final, regardless of who will attend or boycott the session,” the sources added.

The newly-formed Cabinet has not convened since October 14 due to a dispute over the port blast investigator Judge Tarek Bitar . Hezbollah and the Amal Movement are demanding that the government take action to fire him over alleged bias.

President Michel Aoun and PM Mikati, have stressed that they reject “political interference” in judicial affairs.

One analyst told Ya Libnan ,” this is the price we are paying for getting Aoun to Baabda “