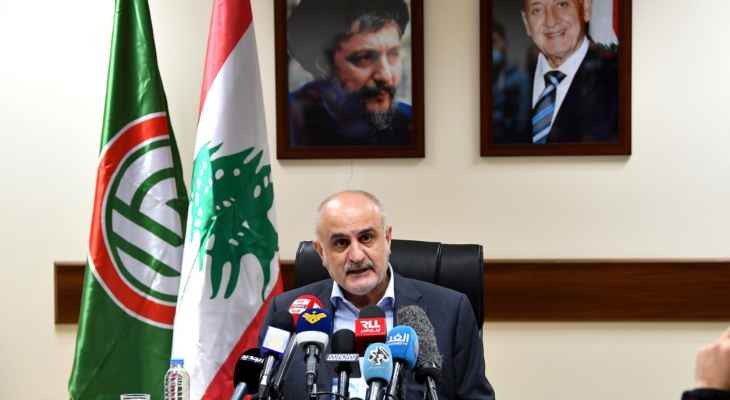 The alliance between “the patriotic duo” is based on transparency and respect, Khalil said, in reference to the s called Shiite Duo between Hezbollah and Amal Movement

Khalil went on to accuse the FPM of disrupting Cabinet sessions in the past, of corruption at the Ministry of Energy, of shelving draft laws, of covering up for thefts and of causing half of the Christians to emigrate.

“There is diffusion in responsibility, when two presidents are elected at the same time,” Khalil said, in reference to Bassil’s influence over his father-in-law , President Michel Aoun.

“The problem with the central state is when we elect two “presidents” of the republic and the responsibility is lost and its president becomes idle under the pretext of preserving rights, which are the rights of his movement and his group. And it is not to protect a sect or a position, at a time when the claimant for the rights of the sect should know that in their time half of the Christians emigrated from Lebanon and that the president was the one who squandered the rights of Christians ” Khalil said

He added that Bassil is not defending the Christian rights, that were “wasted” by the FPM, but rather “his clan’s rights.”

“The Lebanese have lived years of disruption for the son-in-law’s sake,” Khalil said and added that Bassil is speaking of financial decentralization “to cover up the catastrophic failure and waste at the Ministry of Energy,” and accused Bassil and President Michel Aoun of shelving and delaying many draft laws.

He stressed that “the Lebanese are witnessing the distortion of consensual democracy by disrupting the state and decisions in the cabinet in order to pass deals and decisions, and who transformed the principle of participation into confiscation under the sectarian and “current” title. In the files of energy, communications, environment and many others. And you are the ones who disrupted the cabinet sessions and imposed solidarity with you under different headings.”

Concerning the Tayyouneh clashes , Khalil asked “how the right to expression and demonstration became a conspiracy and how Bassil considered it an illegal act.” The clashes occurred after Hezbollah and Amal supporters protested against judge Tarek Bitar , who is the lead investigator of the devastating Beirut Port blast , in which Khalil is a suspect . Several Hezbollah and Amal supporters were killed after gunfire was exchanged between the mostly Christian residents of Ain el Rummaneh and the Shiite duo supporters .

Hezbollah and Amal have been widely critical of the investigation into last year’s Beirut Port investigation, accusing the judge of being biased and asking for his dismissal — a position at odds with FPM and its chief .

Khalil’s comments came in response to Bassil’s Sunday press conference in which he said that a 15-year-old alliance with the country’s powerful Iranian backed Shiite group Hezbollah was no longer working and must evolve.

The televised speech by Gebran Bassil signaled an unprecedented level of frustration with Hezbollah .

Bassil’s comments come amid a devastating economic crisis and also ahead of critical parliamentary elections in which his party is expecting tough competition. Undoing the alliance with Hezbollah would cost him more votes in the May elections.

Bassil pinned his frustration on Hezbollah’s other ally, the Amal Movement. He said in recent months Hezbollah has backed Berri’s Amal at the expense of their own alliance.

“We reached a memorandum of understanding (MOU) with Hezbollah (in 2006) not with Amal,” Bassil said . “When we discover that the one making decisions in (this alliance) is Amal, it is our right to reconsider.”

Commenting on Bassil and Khalil’s attacks , a Lebanese observer told Ya Libnan .” This reminds me of the story of Ali Baba and his 40 thieves , finally they are at each other’s throats exposing each other . It is very important that the Lebanese people should be taking notes and remember this during the upcoming election “