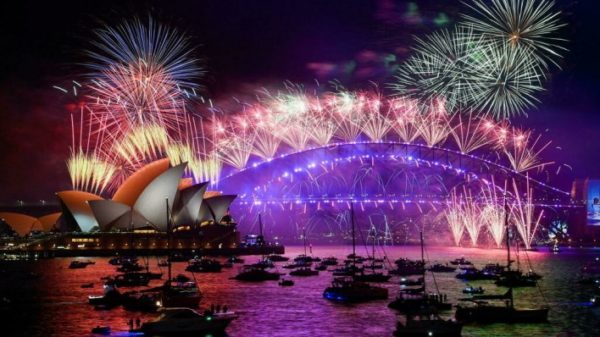 The world began ushering in 2022 on Friday after another tumultuous and pandemic-ridden year capped by new restrictions, soaring case numbers, and a slight glimmer of hope for better times ahead.

The past 12 months saw a new US president and a fresh Adele album, the first spectator-free Olympics, and dreams of democracy from Afghanistan to Myanmar and Hong Kong crushed by authoritarian regimes.

But it was the pandemic — now entering its third year — that again dominated life for most of humankind.

More than 5.4 million people have died since the coronavirus was first reported in central China in December 2019.

Countless more have been sickened — subjected to outbreaks, lockdowns, lock-ins and an alphabet spaghetti of PCR, LFT and RAT tests.

The year 2021 started with hope, as life-saving vaccines were rolled out to around 60 percent of the world’s population, although many of its poor still have limited access and some of its rich falsely believe the jabs are part of some ill-defined plot.

As the year drew to a close, the emergence of the Omicron variant pushed the number of daily new Covid-19 cases past one million for the first time, according to an AFP tally.

France on Friday became the latest country to announce Omicron was now its dominant coronavirus strain.

In Britain, the United States, and even Australia — long a refuge from the pandemic — the variant’s prominence is driving record new cases.

To party, or not?

Parts of the Pacific nation of Kiribati became the first to welcome in the new year from 1000 GMT.

But from Seoul to San Francisco, celebrations have again been cancelled or curtailed as infections rise.

In Sydney, which in normal times bills itself as the “New Year’s Eve capital of the world”, the vast harbour where people gathered to watch the city’s fireworks was notably uncrowded.

With tourists still unable to enter the country and many residents fearful of the rapid spread of Omicron, tens of thousands were estimated to have attended, rather than the one million-plus who normally flock to the foreshore.

Still, the city saw New Year’s Eve in with a bang — igniting six tonnes of technicoloured fireworks that lit up the Opera House and floating barges, turning the Harbour Bridge rainbow-like.

“I’m just trying to focus on the positive things that happened this year, rather than dwelling on all the bad things that have happened,” 22-year-old medical student Melinda Howard told AFP as she waited for the show.

Dubai is planning a pyrotechnics spectacle at the Burj Khalifa, the world’s tallest tower, despite a surge of infections in the United Arab Emirates.

Elsewhere in the Middle East, municipal authorities in the Tunisian capital Tunis cited the “rise in cases” of coronavirus for the last-minute cancellation of a concert and other festivities planned for Bourguiba Avenue, the main city-centre thoroughfare.

In contrast, South Africa — the first country to report Omicron back in November — lifted a curfew late Thursday to allow festivities to go ahead.

Health officials said that a dip in infections in the past week indicated the peak of the current wave had passed — crucially without a significant increase in deaths.

In Rio, celebrations on Copacabana Beach will go ahead in a scaled back format — though crowds of revellers are still expected at the traditional party spot.

“People have only one desire, to leave their homes, to celebrate life,” 45-year-old Copacabana beach waiter Francisco Rodrigues said.

Authorities in Seoul are showing caution, barring spectators from a traditional midnight bell-ringing that will instead be live-streamed.

In India, fearing a repeat of a devastating virus surge that overwhelmed the country in April and May, cities and states have imposed restrictions on gatherings. Delhi implemented a 10:00 pm curfew.

Mumbai police on Friday issued evening bans on people visiting public places such as the city’s beaches and seafront promenades, normally popular sites for seeing in the new year — with the restrictions set to last two weeks.

The UK also marks the new year in muted fashion, but at least does so under the warmest temperatures on record, near 15 degrees Celsius (59 degrees Fahrenheit).

The World Health Organization has warned of trying times ahead, saying Omicron could lead to “a tsunami of cases”.

Many Western leaders have been hesitant to reimpose strict controls seen in 2020, for fear of sparking a new economic downturn.

Experts and non-experts alike hope that 2022 may be remembered as a new, less deadly phase of the pandemic.

“Hopefully 2022 is going to be better for everyone,” said 31-year-old reveller Oscar Ramirez in Sydney.

“Everyone in the world needs a big change.”

Lebanon, no reason to celebrate

With its economy in tatters and political bickering holding back prospects of recovery, Lebanon has had little reason to celebrate in 2021.

Around the end of the year, Lebanese expatriates and tourists pour into the country, giving famished restaurants, pubs and nightclubs a much-needed cash injection.

Covid cases across are surging. On Thursday, the Lebanese health ministry reported 4,537 cases, increasing from 3,153 the day before.