Lebanon: From Switzerland of the Middle East to modern-day dystopia 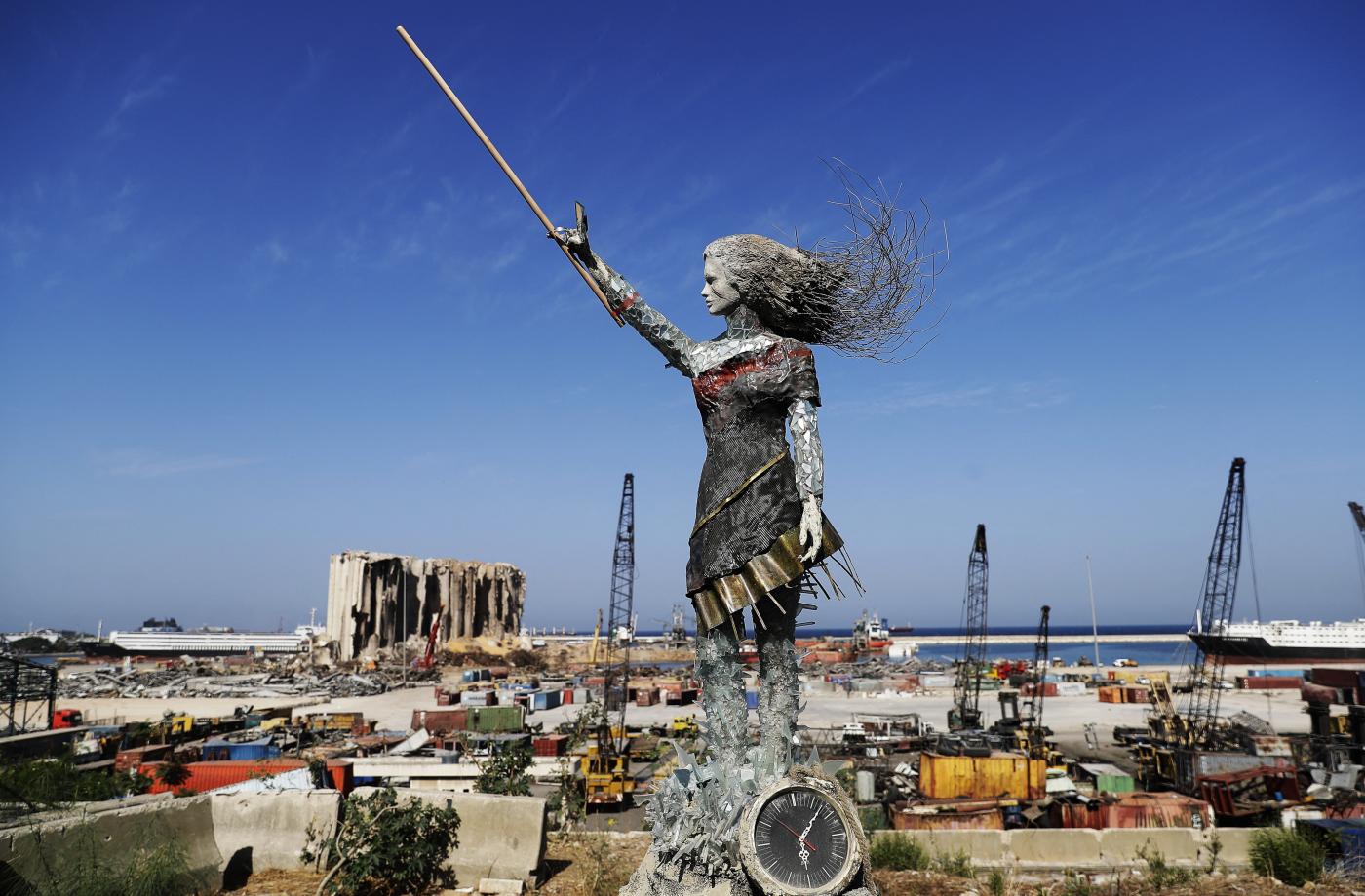 A statue of a woman by Lebanese artist Hayat Nazer, made out of leftover glass, rubble, and a broken clock marking the time (6:08 PM) of the mega explosion at the port of Beirut that took place on August 4, 2020 (AFP)
Share:

After years of delusional economic policies maintained by a corrupt elite, a rude awakening is under way in Lebanon

Two years into the Lebanese economic meltdown, the coffers of a nation once known as the Switzerland of the Middle East are empty, the underbelly of its banking system – offering illusory interest rates – exposed, and the Lebanese people given a thorough reality check.

The dizzying deterioration of the economy has shaken Lebanese society to the core, driving swaths of working class, middle class, underprivileged and well-to-do populations into poverty, and toppling a financial system that has been described as a nationally regulated Ponzi scheme.

Following the 1975-1990 civil war, successive governments in Lebanon implemented financial engineering policies aiming to revive its former reputation as the Switzerland of the Middle East – a distinction owing more to the banking secrecy of its financial institutions than to its mountains.

This idealistic association has given way today to a very real dystopia: the fiction of the Lebanese economic miracle culminating in the monetary curse of a man referred to until only recently as a “financial wizard”, Riad Salameh. The effects of the enchantment have worn off, and with the outbreak of the country’s worst-ever socioeconomic crisis – civil war years included – it is clear that the governor of Lebanon’s central bank has crossed over to the dark side.

A living hell under Aoun

The former strongbox of the Middle East is nothing but a piggy bank with a padlock for anyone who failed to stash their cash under their mattress in time. With depositors and bankers engaged in a surreal and merciless struggle, the country has become a gigantic theatre, where the only show playing is a farcical drama.

This surreal situation sees savers locked out of dollar accounts, or told that funds they can access are worth less. “This is not a dollar,” the Lebanese might rightly tell themselves, because not only are withdrawals capped, but greenbacks in the land of cedars are instantly converted into multicoloured stacks of worthless Lebanese pounds. In other words, a fistful of Monopoly money in a game where the depositors alone go directly to jail – condemned for having dared, one October evening in 2019, to attempt to derail the system.

Growing illegal financial practices and the closure of the banks in the wake of the October 2019 popular uprising might have kicked the Lebanese crisis into high gear, but trouble had been brewing for some time. International investments had already begun to dry up, and the funds pilfered for years by a bone-corrupt elite greasing the Lebanese banking system had already set sail for more pleasant shores – offshore tax havens, some would say.

While the nation sinks into inexorable bankruptcy, the usual suspects are sitting pretty and hardly worried, mutually absolving themselves of any wrongdoing and clinging to the reins of power of a non-existent state – though this means sacrificing the entire population of Lebanon in the name of political survival. But such is life when you make a deal with the devil.

Because Lebanon today is a living hell under President Michel Aoun. Thirty years after being forced to flee the presidential palace as the Lebanese civil war came to a disastrous close, the former military commander is confined to the presidential palace once more – along with his henchmen, who are in the same boat, though they pretend to be enemies – condemning the Lebanese people to a slow death, rather than surrendering his arms.

Meanwhile, his clique continues to enjoy the good life, hardly worried about starving to death or lacking access to medical care, and even less about whether they will be able to fill their car tanks to drive their children to school, or heat their homes this winter. But such is the daily reality of the three-quarters of the population said to be living in poverty today – the have-nots desperately searching to escape the hell on Earth that their native country has become.

Lebanese citizens unwilling to attempt the desperate crossing of the Mediterranean are flocking to public offices to obtain visas to any possible destination. They are looking to somewhere beyond the sea, where the glow of green is beckoning, the green light of hope – and the dollar.

For the almighty greenback is the ticket out of Lebanon, and the Lebanese people are careful to squirrel away their dollars (at home) while waiting for the big departure. The dollar, the key to survival, is exchanged on the black market at a rate that is reshaping Lebanese society. To differentiate the former rich and the new poor – and to see Karl Marx turn over in his grave – you simply need to ask: “What currency are you paid in?”

Beirut is perhaps six feet under today, but the capital city has “died a thousand times and been reborn a thousand times”, as the Lebanese poet Nadia Tueni told us. Her words were posted on roads around the city in the aftermath of the tragic Beirut port explosion on 4 August 2020.

Everyone at the time believed Lebanon had officially hit rock bottom; that the disaster would bring about lasting change and reform. But innocent suffering doesn’t carry much weight with a ruling elite who, a year later, have done nothing to change the status quo.

On a highway skirting the port of Beirut, the words “our government did this” can be read. Repeatedly painted over by authorities and repainted by ordinary citizens, the words are photographed by unfortunate Lebanese passersby unable to leave the country. And they firm up the determination of the people who, after admirably hanging in for so long, have chosen to say goodbye at last, creeping to the airport like tortoises, their homes on their backs.

Legends and dystopias are the stuff of imagination, and putting too much faith in them can lead to delusional behaviour. As the staggering deterioration of Lebanon over the past two years only goes to show, truth is stranger than fiction. The story of Lebanon could open like this: Once upon a time, there was a nation known as the Switzerland of the Middle East. And frankly, the story ends there.