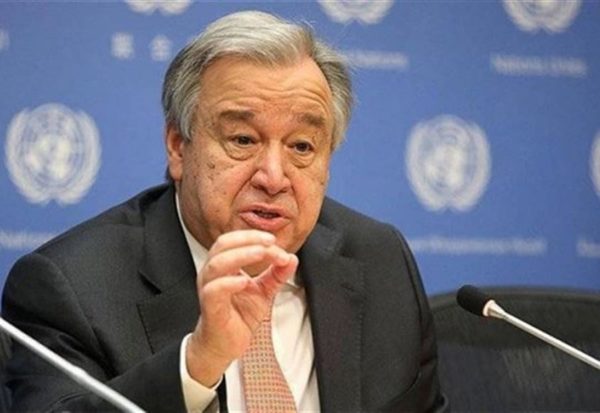 Secretary-General Antonio Guterres called for free elections and urged the Lebanese state to increase its efforts to achieve a monopoly over the possession of weapons. Called for disarming Hezbollah
Share:

During his visit to Lebanon United Nations Secretary-General António Guterres stressed that, “Extremist groups must not be a substitute for the state in Lebanon.”

Guterres, in an interview with Asharq Al Awsat daily , added, “The situation in Lebanon is sad and reforms must be implemented.”

He called on Hezbollah to “turn into a political party like other political forces in the country.”
and appealed to , “The Gulf states to be part of Lebanon’s recovery.”

At the end of the 1975, 1990 civil war a settlement was reached in Taif Saudi Arabia , which is referred to the Taif Accord . The accord stipulated that all militias should hand over its arms and ammunition to the Lebanese army , but Hezbollah refused to hand over its arms claiming that it needs them for resistance against the Israeli occupation of southern Lebanon. Israel withdrew from Lebanon over 21 years ago in May 2000 but Hezbollah never handed its arms to the Lebanese army . It claims that it wants to liberate the Shebaa farms which are part of the occupied Golan heights . In the 1967 war Israel occupied the Golan heights which is near the Lebanese borders .

Instead of resisting against Israel Hezbollah has pointed its guns internally against the Lebanese people and has been using its arms to protect the corrupt ruling class . Hezbollah claims to have over 100, 000 fighters almost double the size of the Lebanese army

Hezbollah which was created by The Iran revolutionary Guard (IRGC) in 1982 as part of its al Al Quds foreign force, has been acting as proxy of Iran , helping it destabilize the whole Middle East specially in Lebanon, Iraq, Syria and Yemen .

In Lebanon Hezbollah now controls all the branches of government , the presidency (Thru its ally president Michel Aoun) , the parliament thru its ally speaker Nabih Berri) and has been preventing the Prime minister from holding any cabinet meeting , because it wants him to fire the judge investigating the massive Beirut Port explosion , something PM Najib Mikati refused to do