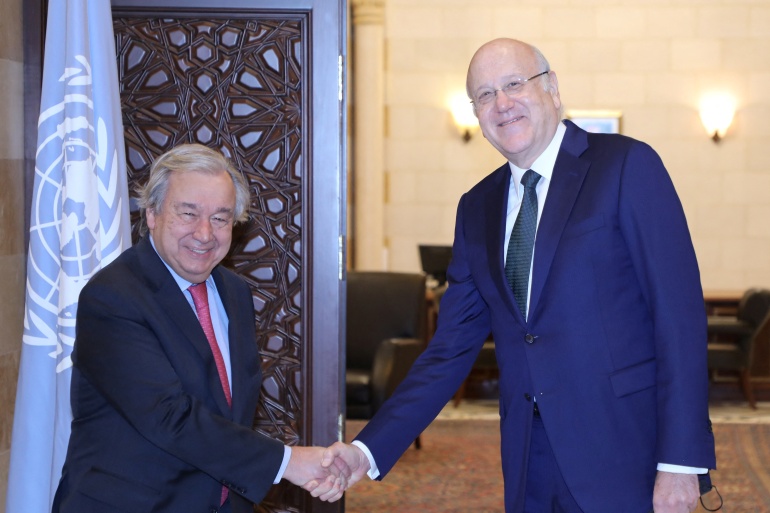 “We aspire Lebanon to establish a social contract, develop its relations with foreign countries, and to achieve reforms in cooperation with civil society and the private sector,” Guterres said on Monday following a meeting with Prime Minister Najib Mikati at the Grand Serail.

Mikati said Lebanon is committed to its dissociation policy from regional disputes and conflicts.

The international community continues to urge Lebanon to implement economic and structural reforms to stop wasteful spending and establish anti-corruption and transparency mechanisms.

Guterres’s visit comes as Lebanon struggles with crippling political paralysis, and an economic crisis that has caused three-quarters of its population to fall into poverty. Lebanon is struggling to control the local currency, which has lost more than 90 percent of its value in just over two years, as well as skyrocketing inflation.

He also asked that the international community help to facilitate the return of Syrian refugees.

“Nevertheless, we saw Lebanon opening its borders, even though larger countries closed theirs, and this reflects the Lebanese generosity,” he said. Lebanon hosts about 1.5 million Syrian refugees.

Guterres also visited the Beirut port to pay his respects to the victims of the port explosion in August last year that killed more than 200 people, injured about 6,500 others, and flattened several neighbourhoods of the Lebanese capital.

“An impartial and transparent investigation into this tragic event is crucial to ensure justice,” the UN secretary-general said on Twitter.

Guterres landed in Beirut on Sunday afternoon to follow up a host of issues, primarily related to the economic crisis, reforms, and security.

After the meeting, Guterres said he would meet many political, religious and civil society leaders.

“My objective is to discuss how we can best support the Lebanese people to overcome the current economic and financial crisis, and to promote peace, stability, and sustainable development,” he said.

Guterres also stressed on the importance of backing the Lebanese army and other security institutions, as well as UN peacekeepers based in the country’s south.

He also called on the international community to increase aid to Lebanon, saying that just 11 percent of the UN’s humanitarian response plan for the cash-strapped country has been funded.

“Seeing the suffering of the people of Lebanon, Lebanese political leaders do not have the right to be divided and paralyse the country.”

Lebanon’s recently formed government under Mikati has not met in more than two months due to political squabbling over Judge Tarek Bitar, who is leading the Beirut port blast investigation, armed clashes in Tayyouneh in mid-October, and an ongoing diplomatic row with Saudi Arabia, Bahrain, the United Arab Emirates, and Kuwait.

Aoun said he assured Guterres that elections will be held on time and that they will be “transparent and fair to reflect the true will of the Lebanese people choice of representatives”.

The president echoed Mikati’s sentiments on the refugee crisis and called on the international community to revise its approach towards Syrian refugees, and asked them to “assume its responsibilities and encourage the safe return of the displaced to their homeland”.