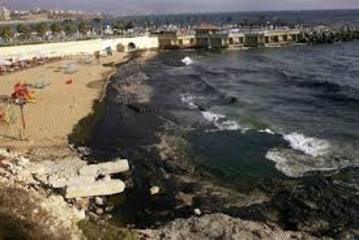 The Jiyeh Power Station oil spill is an environmental disaster caused by the release of heavy fuel oil into the eastern Mediterranean after storage tanks at the thermal power station in Jiyeh, Lebanon, 30 km (19 mi) south of Beirut, were bombed by the Israeli Air force on July 14 and July 15, 2006 during the 2006 Israel-Lebanon conflict. The plant’s damaged tanks leaked up to 30,000 tonnes of oil into the eastern Mediterranean Sea, A 10 km wide oil slick covered 170 km of coastline, and threatened Turkey and Cyprus. The slick killed fish, threatened the habitat of endangered green sea turtles, and potentially increased the risk of cancer.
Share:

The UN General Assembly adopted a resolution on Friday acknowledging that $856.4 million in damage was caused by an oil slick in 2006 and calling for Israel to assume responsibility by compensating its northern neighbour and Syria.

Some 161 countries voted in favour of the draft titled “Oil slick on Lebanese shores”, eight – including Australia, Canada, Israel, Marshall Islands, Federated States of Micronesia, Nauru, Palau and the United States – voted against, and there were seven abstentions.

According to that draft, “the Assembly would request the Government of Israel assume responsibility for prompt and adequate compensation to Lebanon for the damage. It would also request Israel to compensate other countries directly affected by the oil slick, such as Syria, whose shores were partially polluted,” the UN said on its website.

Speaking before the vote, the representative of Guinea said the slick affected two-thirds of Lebanon’s coastline and negatively impacted its economy.

While the US expressed disappointment that the UN “continues to take up this unbalanced resolution critical of Israel”.

Israel said the draft text was without merit and had “taken up the Committee’s valuable time and resources for far too long”. Claiming Hezbollah caused the oil slick, he added that “the resolution is based on false premises”.

The representative of Lebanon said the draft’s approval “reaffirms the Committee’s commitment to international and environmental law as well as the Charter of the United Nations”.

The slick was created when Israeli jets bombed a power station, releasing about 30,000 tonnes of oil into the eastern Mediterranean sea.

At its peak, it stretched for 120 kilometres along the shore.