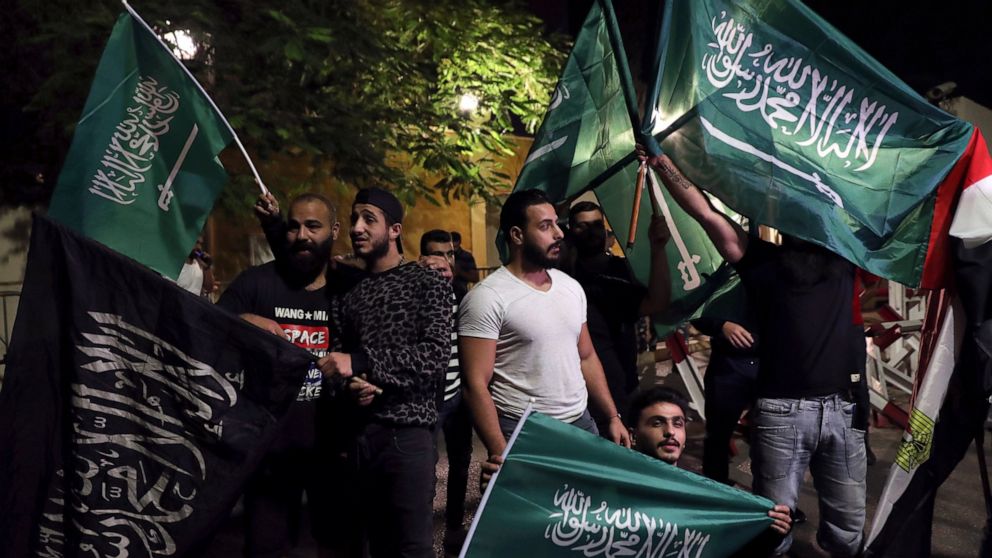 ILE – Lebanese hold Saudi Arabia flags during a protest in support of the kingdom against comments made by a Lebanese minister over the war in Yemen, in front of the Saudi Arabia Embassy in Beirut, Lebanon, Oct. 30, 2021. Televised comments by George Kordahi, a Lebanon Cabinet minister about the war in Yeme
Share:

George Kordahi’s remarks enraged the Saudis, and ordinary Lebanese are paying the price.

For decades he has been one of the Middle East’s most famous TV personalities. George Kordahi, now 71, cemented his status as a household name when he began presenting the Arabic version of Who Wants to be a Millionaire in the early 2000s. He brags on his website that he holds the record for being the “highest paid television presenter in the Arab world”.

He schmoozed with glamorous women, launched his own perfume and clothing lines, and would win the hearts of viewers as the host of Millionaire through his dapper charm, jokes and seamless recital of Arabic poetry.

Now, with the backing of the militant Hezbollah movement, he is Lebanon’s information minister. And after little more than a month in the job, he has found himself at the centre of the country’s worst ever diplomatic rupture with the Gulf – a crisis that has already cost the bankrupt and collapsing state hundreds of millions of dollars.

Comments he made on Saudi Arabia’s involvement in the Yemeni Civil War outraged the kingdom and caused diplomatic chaos for a country that desperately needs the financial backing of its traditional Gulf allies.

Since 2015, Saudi Arabia, which supports the internationally recognized government, has been leading a coalition fighting the Houthi rebels, who are backed by Iran. All sides of the war in Yemen, which has spiraled into the world’s worst humanitarian crisis, have faced international backlash over human rights atrocities.

In an interview with a part of the Al Jazeera network, Kordahi described the Houthis’ actions as “self-defense”. The interview, released in late October, had been recorded a few weeks before he was named as information minister.

When asked about Houthi missile attacks that have targeted Saudi Arabia, Kordahi turned the question on to Saudi’s own bombing campaign: “You need to also look at the damages inflicted on them as a people. They are bombed in their homes, in their houses, in their villages, in their squares, in their funerals.”

A diplomatic firestorm broke out. Saudi, the United Arab Emirates, Kuwait and Bahrain quickly recalled their envoys and expelled Lebanese ambassadors. Then Saudi banned imports from Lebanon in order to “protect the security of the kingdom and its people”, citing what it claimed was “Hezbollah’s control of all ports” in Lebanon.

The ban spelled catastrophe at a time when Lebanon is in the throes of what the World Bank claims is one of the worst economic crises in modern history. The UN estimates that 78 per cent of the country now live beneath the poverty line as everything from healthcare to education collapses.

The Gulf, including Saudi, is cash-strapped Lebanon’s biggest export destination. In the first three months of this year, Saudi on its own rose to become Lebanon’s second-largest market. Lebanese exports were valued at nearly $250m last year, according to official customs data.

While the Saudi import ban is damaging on its own, if its Gulf Cooperation Council allies follow suit, they could devastate what is left of Lebanon’s bludgeoned economy and cost Lebanon over a billion dollars a year.

“We would be out of oxygen if that happened,” said Roy Badaro, a Lebanese economist. “No country would be able to bear such a price.”

Between the remittances sent home by Lebanese nationals working in Saudi and the export market, the kingdom is “one of the lungs of Lebanon”, he added.

“The main source of fresh dollars in Lebanon [since the economic crisis began] is exports,” said Talal Hijazi, the general manager of the Lebanese Association of Industrialists.

It is a crisis that has been brewing for years: Lebanon’s traditional Sunni allies in the Gulf no longer want to bankroll a state in which Shia Iran backs the most powerful political and military force.

“We see no useful purpose of engaging with the Lebanese government at this point in time,” the Saudi foreign minister Prince Faisal bin Farhan al-Saud told France 24 television in an interview aired on 13 November. “We think that the political class needs to step up and take the necessary actions to liberate Lebanon from the domination of Hezbollah, and through Hezbollah, Iran.”

“Saudi Arabia is troubled because it could not dominate the political decision in Lebanon, despite the money it paid,” said Hezbollah deputy secretary-general Naim Qassem.

“No one can twist the arm of Hezbollah.”

As Hezbollah – a group created by Iran – grew in power, so too did the strains on the Saudi-Lebanese relationship. Matters came to a head in 2017, when the kingdom detained then-prime minister Saad Hariri on a visit and made him resign from his position on TV.

Joining Saudi Arabia, Bahrain and the UAE have now called on their citizens to leave Lebanon, while Kuwait has said that it will limit the number of visas it will grant to Lebanese citizens.

As the crisis drags on, there is a growing anxiety that Saudi could ban remittances of money being sent to Lebanon. With a failed banking sector, funds sent back from abroad are the only survival mechanism for much of the country. Sixty per cent of those remittances come from the Gulf, the central bank estimates.

The rift in diplomatic relations has already created stumbling blocks for Lebanese who have secured jobs abroad but are struggling to get visas.

“The crisis will negatively impact those ordinary Lebanese whose livelihoods are dependent on Gulf economies and will further fragment the political front opposed to Hezbollah,” said Lina Khatib, director of the Middle East and North Africa programme at the Chatham House think tank.

“If the cut in relations continues, Lebanese Sunni political figures who have traditionally relied on Saudi backing will find it difficult to contest the anticipated parliamentary elections. This will further empower Hezbollah, which benefits from weakness and divisions among its opponents,” she added.

After the port explosion in August 2020, Lebanon was without a functioning government for 13 months. Najib Mikati, the prime minister, managed to form a “rescue government” in September 2021, but even before this diplomatic spat, it was already paralysed.

The cabinet has not met since 12 October, split over whether the judge investigating the Beirut explosion should be removed. That dispute led to deadly street fighting just two days later when snipers opened fire on a Hezbollah-organised protest to demonstrate against a judge they claim is biased.

Now the decision of how to deal with Kordahi has caused another fissure, sparking fears that Mikati’s government could resign before anticipated elections next year. Kordahi – who is backed by Marada, a Christian party that is allied with Hezbollah and close to the Syrian regime – has refused to apologise or resign over his comments and the ensuing fallout.

Hezbollah leader Hasan Nasrallah has reiterated his support for Kordahi, claiming that Saudi Arabia is trying to incite sectarian instability in Lebanon over the “fabricated” crisis.

“If we sack Kordahi, what will we get from the kingdom? Nothing… they’ll ask for more,” Lebanon’s foreign affairs minister, Abdallah Bou Habib, said in a leaked audio recording, adding further tension to the dynamic.

With the paralysis of the cabinet, little progress has been made on negotiations to allow the government to unlock desperately needed International Monetary Fund assistance, or on the allocation of a long-delayed ration card system that was designed to help the poorest.

Lebanon’s interior minister Bassam Mawlawi on 13 November called for Kordahi to resign. The prime minister has stopped short of asking Kordahi to step down, but has said that his government will not collapse.

Without a Saudi market, industrialists “will start to invest outside Lebanon in other Gulf or Arab countries, such as Egypt or Oman,” warned Hijazi. “If Lebanon does not recover, they may start to move their businesses away altogether. It can take ten years to build up a good relationship with distributors in a new market. This is not a quick or easy change that you can make.”

And there are other factors too. In April, Saudi authorities found 5.3 million pills of captagon – dubbed around the region as the “poor man’s cocaine” – in pomegranates that had been imported from Lebanon. Several high-profile captagon seizures have been traced back to areas controlled by the Syrian regime and Hezbollah.

Riyadh responded by banning the imports of Lebanese food and agriculture. The results were devastating for Lebanese farmers – though many circumvented the ban by smuggling produce through Syria, from where it was then sold on to Saudi. As Hijazi explained, 60 per cent of Lebanon’s agricultural exports are usually sent to Saudi. For the export market as a whole, the Gulf market makes up 25 to 30 per cent.

The ban on Lebanese imports is almost “a type of sanction that Saudi Arabia is putting on the Lebanese government for not doing enough to control the drugs – mainly captagon – and its exporters,” said Badaro.

Memes that read “who wants to steal a million?” swarmed social media after Kordahi’s appointment, nodding at the entrenched corruption of Lebanon’s political class, which for decades has siphoned resources from the state.

“Who will make us beg for yet another million?” a political cartoon read the day after Kordahi sparked the latest episode in the crisis. It will take more than a game show windfall to rescue Lebanon from its catastrophic economic decline.