Aoun denies he is allied with Hezbollah 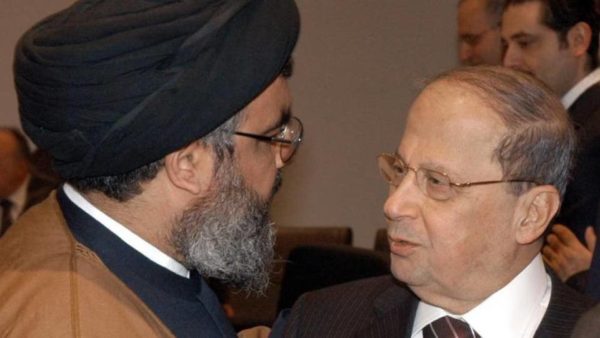 File photo: FPM founder and current Lebanese president Michel Aoun is shown with Hezbollah chief Hassan Nasrallah during the signing of the memorandum of understanding on Feb 6, 2006 . FPM admitted 15 years later that the agreement failed in building a state . Aoun hinted on Dec 27 at friction with Hezbollah. In a televised speech, he called for defense dialogue stressing that the state alone puts in place the defense strategy and attends to its implementation.” Hezbollah violated all national dialogue decisions that were made during the past 16 years , when it launched a war against Israel in 2006 and when it joined the war in Syria to defend the Syrian regime of Bashar al Assad and when it interfered in the Yemen war, Iraq and the Arab Gulf states
Share:

Lebanon President Michel Aoun denied he is allied with Hezbollah he says his relationship is built around “an understanding not an alliance.”

“Hezbollah respects three main rules: Resolution 1701 (that ended the 2006 war), domestic stability and avoiding any harassment to the ambassadors of countries that designated Hezbollah as a terrorist organization, such as the USA, UK , Germany and Arab countries,” Aoun told al-Akhbar newspaper.

He told the pro-Hezbollah daily that there is no disagreement between him and Saudi Arabia.

“It was the first country I visited when I was elected for presidency in 2016,” Aoun said, adding that he hadn’t received any negative signs from KSA to indicate otherwise .

“The crisis began when Saudi Arabia  forced the detention of then-Prime Minister Saad Hariri in November 2017. Several weeks ago, an Arab League envoy was sent to explore a way out of the crisis but left empty-handed after Hezbollah vetoed a solution which would have involved the exit from the Lebanese government of the maladroit Information Minister George Kordahi, who irritated the Saudis by criticizing their intervention in Yemen.

This particular rupture may be more difficult to mend as the Gulf states seem to have simply given up on Lebanon after years of trying in vain to support their allies in Beirut, notably prominent Sunni and Christian leaders, in the face of Iran’s hegemony in the country. The statement by Kordahi started a new crisis.”

Aoun told al-Akhbar that he prefers that Kordahi take the decision to resign over the option of firing him.

Aoun claimed in the interview that he wants the best relations with KSA, and these relations shouldn’t be affected by one person, such as Hariri or Kordahi. He added that there are no mediators between Lebanon and KSA now, and that the only solution is “direct talks.”

“We are quietly working on it and we hope we will reach a positive outcome,” Aoun revealed.

Aoun also told the daily that he disagrees with Hezbollah concerning the lead investigator into Beirut’s port blast. He said that he strongly stands with the separation of powers. “We don’t have the right to interfere in a matter that is not within our competence. The judge has an authority that would hold him accountable if he makes a mistake, it’s not our responsibility,” he said.

Judge Bitar was appointed lead investigator into the Beirut Port blast after the removal of his predecessor Judge Fadi Sawwan in February . The Beirut Port exploded on Aug 4 , 2020. killing some 218 people , injured about 7000 and left 300, 000 homeless after 2,750 Tons of Ammonium Nitrate Exploded . They were stored there for nearly 7 years. , reportedly for use by the Syrian regime in its barrel bombs against the civilians in Syria. Former PM Hassan Diab and president Aoun were informed about the explosive chemical 2 weeks before the explosion. but neither did anything about it . Hezbollah and its Amal and Marada allies have been for months trying to get Judge Bitar fired from his position like they did to his predecessor Judge Sawwan .

Lokman Slim , a prominent Shiite Lebanese researcher and a critic of Hezbollah was assassinated after disclosing that Hezbollah was behind the acquisition storing and distribution of the ammonium nitrate . Of the 2750 tons that were originally stored at the port only about 500 tons exploded according the the FBI which investigated the blast . The rest according to Slim were shipped by Hezbollah to the Syrian regime and to its own cells in Germany, UK and Cyprus for making bombs

Slim was assassinated last February according to former Lebanese caretaker interior minister. “Killing is the only language they are fluent in,” his sister Rasha said in reference to Hezbollah.

He started a war with Syria, and he ran away,” one protester said following the Beirut Port explosion , and accused Aoun of stealing money from the Lebanese people to fund his 14-year exile in France. “Where did you get the money from? Were you working in Paris making croissants? No.” the protester said.

Aoun fled to the French embassy in 1989 after he was defeated by the Syrian army . He was smuggled out of Lebanon by the French in 1991 and returned just days after the last Syrian tanks left the country in 2005, amid massive anti-Syrian protests spurred by the assassination of former Prime Minister Rafik Hariri.

“We felt betrayed,” said another protester “Aoun used to say, ‘We want only the Lebanese Army in the south. We don’t want any militias. We only want the army to have weapons.’ Everything he said before, he did the opposite.”

Aoun spent decades rallying against Syrian occupation and foreign interference in Lebanon—founding the Free Patriotic Movement, whose very name implies a new era of independence—only to turn around and form a government with Hezbollah.

“He gave Hezbollah the Christian cover they wanted, and they gave him whatever he wanted , the presidency and we got screwed.”  said another protester  following the port explosion

“When Aoun became president, we said, ‘OK, your lifelong dream is fulfilled. Let’s see what you’re going to do,’” another protester said, “and he did sxxt.”