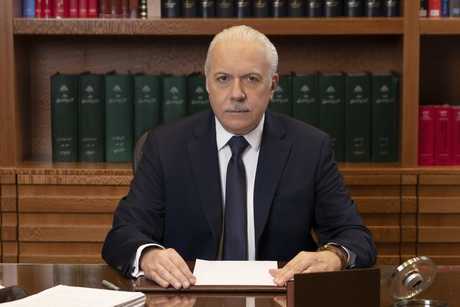 The Iranian backed Hezbollah militant group and its ally the Shiite Amal Movement are trying to get another al-Joumhouria newspaper reported .

Judge Suheil Abboud the Higher Judicial Council head is being blamed for supporting lead port blast investigator Judge Tarek Bitar, whom Hezbollah and Amal are trying to get fired but failed so far

Sources of the Shiite duo told al-Joumhouria, in remarks published Thursday, that Amal and Hezbollah are standing their ground against port blast lead investigator Judge Tarek Bitar, adding that the main problem is Abboud.

Amal and Hezbollah reportedly said that the judiciary has split into “Muslim and Christian judges,” because of Abboud’s practices.

“In the darkest days of (civil) war the judiciary remained unified, and during Abboud’s tenure the judiciary witnessed its worst split,” the sources said.

They went on to ask “where are President Michel Aoun and Prime Minister Najib Mikati in the face of these dangerous practices.”

In a related development the general assembly of the Court of Cassation headed by Abboud convened today, Thursday to look into the lawsuits filed against Judge Bitar by former PM Hassan Diab and former minister Nouhad Mashnouq , National News Agency sources said no decision has been taken , on the two lawsuits .

Judge Tarek Bitar was appointed lead investigator into the Beirut Port blast ( background ) after the removal of his predecessor Judge Fadi Sawwan in February . The Beirut Port exploded on Aug 4 , 2020. killing some 218 people , injured about 7000 and left 300, 000 homeless after 2,750 Tons of Ammonium Nitrate Exploded . They were stored there for nearly 7 years. , reportedly for use by the Syrian regime in its barrel bombs against the civilians in Syria. Former PM Hassan Diab and president Michel Aoun were informed about the explosive chemical 2 weeks before the explosion. but neither did anything about it . Hezbollah and its Amal and Marada allies have been for months trying to get Judge Bitar fired from his position like they did to his predecessor .

This comes also after Lokman Slim , a prominent Shiite Lebanese researcher and a critic of Hezbollah was assassinated after disclosing that Hezbollah was behind the acquisition storing and distribution of the ammonium nitrate . Of the 2750 tons that were originally stored at the port only about 500 tons exploded according the the FBI which investigated the blast . The rest according to Slim were shipped by Hezbollah to the Syrian regime and to its own cells in Germany, UK and Cyprus for making bombs

Slim was assassinated last February according to former Lebanese caretaker interior minister. “Killing is the only language they are fluent in,” his sister Rasha said in reference to Hezbollah. Hazem Saghieh, a well-known Lebanese journalist said. “He was one of a few who only knew how to speak his mind.”