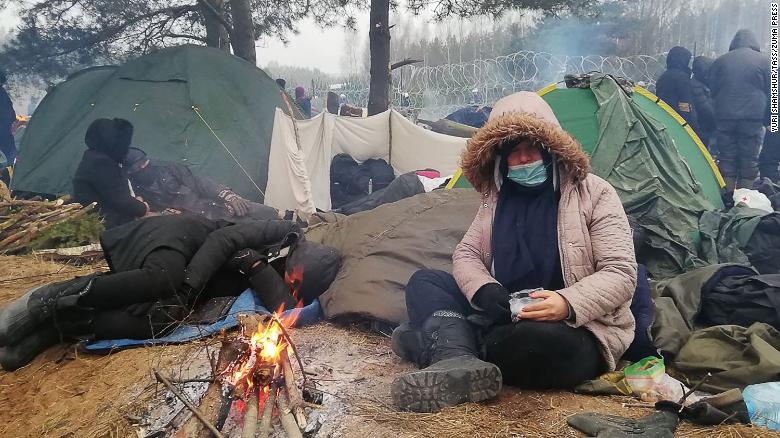 GRODNO REGION, BELARUS – NOVEMBER 10, 2021: Migrants sit by a bonfire at a tent camp on the Belarusian-Polish border. According to the Polish Border Guard, several thousand migrants have been approaching the Polish border from November 8, 2021. Since the start of 2021, over 30 thousand migrants have attempted to cross the Belarusian-Polish border. Poland has declared a state of emergency in the regions bordering Belarus (Credit Image: ? Yuri Shamshur/TASS via ZUMA Press)
Share:

Belarus has threatened to cut off its transit of gas supply to Europe if the EU imposes sanctions over a migrant crisis at its western border.

The bloc has accused Russian-backed President Alexander Lukashenko of weaponizing the thousands of people currently gathered in freezing camps at the border with Poland to undermine EU security and distract from domestic political pressures, an allegation Belarus denies.

With the EU reportedly preparing a fresh round of sanctions, Lukashenko said in an emergency cabinet meeting on Thursday that the country could cut off deliveries along the Yamal-Europe pipeline from Russia, mounting further pressure on European leaders as the continent remains afflicted by the international energy crisis.

“We heat Europe, and they are still threatening us that they’ll shut the borders,” the strongman leader, who has been in power since 1994, reportedly told cabinet ministers.

“And what if we cut off [the transit of] natural gas to them? So I would recommend that the leadership of Poland, Lithuanian and other brainless people to think before they speak.”

The majority of the migrants are from Syria, the Yemen and Iraq, and Belarusian state airline Belavia on Friday said it would stop allowing citizens from all three countries to board flights from Turkey to Belarus, at the request of the Turkish authorities.

Reports suggest that Belavia could be in line for EU sanctions, and questions have also been raised as to whether they could broaden to hit Russia’s Aeroflot or Turkish Airlines.

In a joint statement, the EU members of the U.N. Security Council along with the U.S., U.K. and Albania, condemned the “orchestrated instrumentalisation of human beings whose lives and wellbeing have been put in danger for political purposes by Belarus, with the objective of destabilizing neighbouring countries and the European Union’s external border and diverting attention away from its own increasing human rights violations.”

Experts are divided on whether Minsk’s defiant tone will translate into drastic policy action, with much hinging on the strategic priorities of Lukashenko’s long-time ally, Russian President Vladimir Putin.

“Putin would be quite happy to see energy transit through Belarus disrupted, as he could blame it on Lukashenko, while further piling the pressure on Europe,” Ash said in an email Thursday.

“It would also give him a pretext to formally intervene in Belarus itself — Russian planes already seem to be patrolling now to secure Belarus borders with NATO.”

Ash added that the current direction of travel “feels a bit like slow motion action to an actual conflict in Europe.”

“Let them scream and squeak. Yes, those are nuclear-capable bombers, but we have no other choice,” Lukashenko reportedly said Thursday.

He noted that the Belarusian Defense Ministry and border troops, along with its state security, have been deployed “to ensure control over the movement of troops of NATO and Poland.”

“You can already see 15,000 troops, tanks, armored vehicles, helicopters and planes brought to our border without any warning,” the president said, according to a Belarusian government readout.

However, Emre Peker, director of the Europe team at political consultancy Eurasia Group, said Lukashenko is “extremely unlikely” to follow through on the threat to disrupt gas flows to Europe, due to revenue constraints and likely Russian opposition.

Kremlin spokesman Dmitry Peskov reportedly told journalists on a conference call Friday that Moscow had not been consulted ahead of Lukashenko’s threats to cut gas supply to Europe.

“Halting gas flows would also cost Lukashenko some $300 million a year in transit revenues that Belarus can ill afford.”

Peker noted that this figure is comparable to the economic hit from EU sanctions in June on Belarus’s oil and potash exports, and would “greatly exceed the likely impact of fresh EU sanctions.”

He also suggested that diplomatic, commercial, and legal challenges would prevent the EU from targeting sanctions at Aeroflot and Turkish Airlines, but Brussels will likely hit Belavia to inflict quick punishment on Belarus.