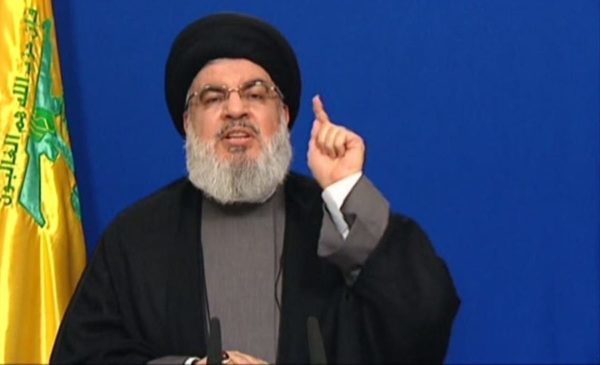 Hezbollah chief Hassan Nasrallah on Thursday slammed Saudi’s “exaggerated” response to remarks made by a Lebanese minister on the Yemen war that sparked a damaging diplomatic row with Gulf Arab states.

In his first public comments since the crisis erupted, the leader of the Iranian backed m militia accused the kingdom of Saudi Arabia of “deliberately” sparking the standoff “as part of its battle” with Hezbollah.

The dispute was triggered by comments made by Hezbollah-backed Lebanese Information Minister George Kordahi in an interview taped in August — before he took office — and broadcast in late October.

Kordahi characterised the Saudi-led intervention in Yemen since 2015 as an “external aggression”, sparking rebukes from Saudi Arabia, Bahrain, Kuwait and the United Arab Emirates.

The diplomatic rift, which threatens to plunge Lebanon deeper into economic meltdown, prompted Saudi Arabia and some of its allies to recall ambassadors and block imports from Lebanon.

The country is in urgent need of international aid, particularly from its wealthy Arab neighbours, to lift it out of the financial and political quagmire.

“The Saudi reaction to Kordahi’s statement is very, very exaggerated and incomprehensible,” Nasrallah said in a televised speech.

“Kordahi was calm and objective. He did not attack anyone and did not use harsh expressions.”

The Gulf backlash to Kordahi’s statement has fuelled calls at home and abroad for his resignation, but Nasrallah said his movement opposes such a move.

He added that the resignation of former foreign minister Charbel Wehbe over remarks that also infuriated Saudi Arabia was a “mistake” that “opened the door to the current pressures.”

The Saudi foreign minister said earlier this month that Hezbollah’s dominance over Lebanon, and not just Kordahi’s comments, prompted the diplomatic row.

Nasrallah hit back on Thursday, saying that the “crisis that Saudi Arabia has deliberately created… is part of its battle with the Resistance (Hezbollah) in Lebanon”.

“We do not deny that we are an influential power… but we don’t control the country,” he added.

He also said that Hezbollah — which Saudi Arabia considers a “terrorist” movement backed by its regional rival Iran — does not seek an escalation with Gulf Arab states.

“We do not want to head into a battle with Saudi Arabia and Gulf states,” he said.

Arab League Assistant Secretary-General Hossam Zaki said following his meetings with the Lebanese officials they are “keen on doing what it takes to serve Lebanon’s interests.”

He pointed out, in a televised interview, that the Lebanese leaders’ stance can break down the wall between Lebanon and the Gulf, “ but the biggest crisis, is Hezbollah’s weapons,” he said.

In a further escalation of the KSA – Lebanese tension Saudi Arabia announced that it will limit the visas it issues for Lebanese nationals to only cover humanitarian cases, MTV said Thursday, which will escalate the diplomatic row between Beirut and Riyadh.

A security source in the Kuwait also said Wednesday the country is to limit the number of visas it issues for Lebanese nationals.

Saudi Arabia and neighboring Kuwait both recalled their ambassadors from Beirut after Lebanon’s information minister criticized a Riyadh-led military intervention in the Yemen conflict, sparking a row with Gulf states.

Hundreds of thousands of Lebanese work in Gulf Arab states including Saudi Arabia, the UAE, Kuwait and Bahrain.

Kuwait, which has a sizable Shiite community, is currently holding a cell of 16 of its own nationals suspected of helping to finance Hezbollah, according to local media.