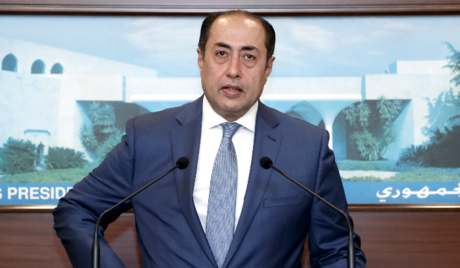 Arab League Assistant Secretary-General Hossam Zaki is in Beirut to help resolve Lebanon’s row with the Gulf countries. He suggested that the resignation of info minister could defuse the crisis with KSA. He added everyone Lebanon knows that too
Share:

An Arab League delegation led by Assistant Secretary-General Hossam Zaki arrived Monday in Beirut in a bid to resolve Lebanon’s row with the Gulf countries.

Zaki said after meeting President Michel Aoun in Baabda that he came to see the Lebanese point of view in order to “make an effort to reconcile viewpoints and solve the problem with Saudi Arabia.”

Zaki stressed that the goal of the Arab League is to protect “the interests of Lebanon and the Gulf and to find a way out of this situation.”

“I may visit KSA if needed, but we must first sense an easing of the crisis so that we can move to the next step,” he said.

“We do not want this situation to continue. We want a breakthrough, a détente in this relationship,” Zaki said after meeting Miqati.

“We hope the starting point for that will begin here,” he added.

Zaki stopped short of calling for Kordahi to quit but suggested it was necessary to defuse the crisis with KSA.

“There is a crisis that everyone can see and is aware of, and the majority of people know how to solve it,” Zaki said.

“But not a single step has been taken in that direction and this is necessary.”

Miqati’s office quoted the prime minister as saying that Lebanon wants normal relations to be restored with Saudi Arabia and Gulf Arab nations, adding that the Arab League can play a role in that. Miqati also said Lebanon will remove all obstacles to restore the relations, according to his office.

The spat has threatened to destabilize Miqati’s government, formed in September after a 13-month deadlock between rival Lebanese groups.

Mikati has urged Information Minister George Kordahi to “do what needs to be done” — an apparent appeal for him to step down but the minister has so far refused to apologize or resign.

Saudi Arabia has withdrawn its ambassador from Beirut and asked the Lebanese envoy to leave the kingdom. It has also banned Lebanese imports, undermining the small nation’s foreign trade and depriving it of millions of dollars even as it struggles amid an economic meltdown.

Bahrain, the United Arab Emirates and Kuwait have also pulled their ambassadors from Lebanon, deepening the spat.

Kordahi, who was named to the government by the Hezbollah-allied Marada Movement, has insisted Yemen’s Houthis have the right to defend themselves and said he did not mean to offend with his comments, which were recorded before he became minister.

The Iranian backed Hezbollah militant group has been urging Kordahi not to quit , and its cabinet members to threatened to resign if Kordahi quits