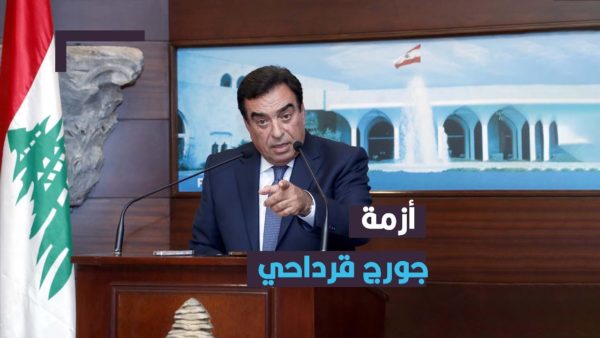 Pressure is mounting on Lebanese leaders to fire George Kordahi a Cabinet minister whose insulting comments on the war in Yemen sparked a diplomatic row with Saudi Arabia. Hundreds of thousands of Lebanese work in Sadia Arabia including his daughter Patricia . Only Hezbollah and its allies are encouraging him not to quit, which prompted many leaders to call for liberating Lebanon from Hezbollah and Iran
Share:

BEIRUT — Pressure is mounting on Lebanese leaders to remove a Cabinet minister whose comments on the war in Yemen sparked a diplomatic row with Saudi Arabia. The head of the country’s Maronite Catholic Church called for “decisive action” in his Sunday sermon, suggesting he wanted the minister to resign.

Cardinal Bechara Rai said the crisis with Saudi Arabia and other Gulf nations threatens to undermine the interests of thousands of Lebanese living there, as well as businesses in Lebanon that depend on the region.

“We look forward to the President and the Prime Minister and all those concerned to take a decisive action to remove the explosive fuse threatening the Lebanese-Gulf relations,” Rai said. “We call for this decisive position in defense of Lebanon and the Lebanese living in the country and abroad.”

His call echoed comments by the Lebanese-Saudi Business Council, an association that represents businessmen from both countries. On Sunday it warned of the crisis’ impact on trade and the economic interests of thousands of Lebanese living in the Gulf.

The council called on the government to remove Information Minister George Kordahi over his comments about the war in Yemen that stoked Riyadh’s ire. Politicians from leading Lebanese parties echoed the call.

Kuwait, the United Arab Emirates and Bahrain followed Saudi Arabia in taking punitive measures against Lebanon following the discovery of Kordahi’s comments, recalling their ambassadors and asking Lebanon’s to leave their countries. Saudi Arabia, one of Lebanon’s biggest export markets, banned all Lebanese imports — a major blow for a country struggling with a crippling economic crisis.