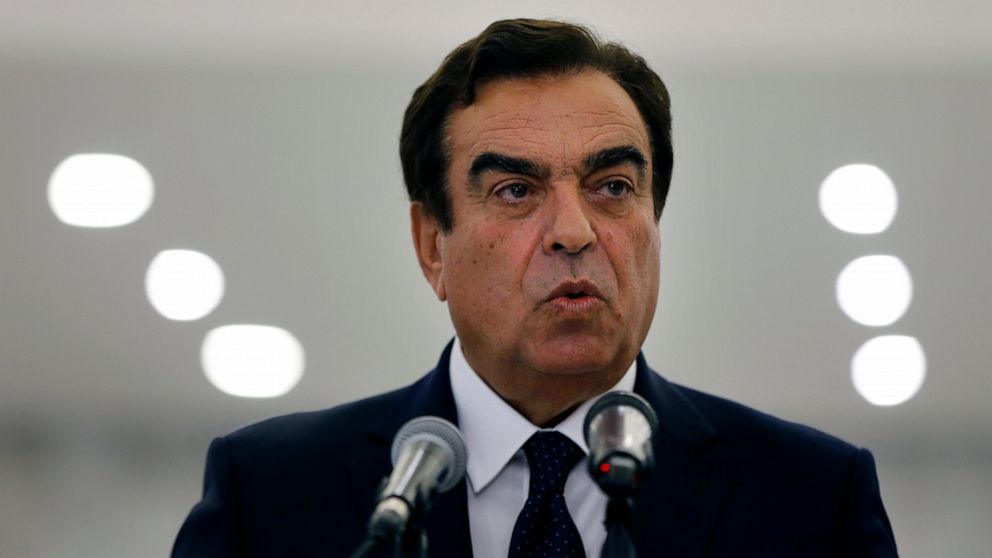 Lebanon’s Information Minister George Kordahi speaks to journalists after a cabinet meeting at the presidential palace in Baabda, east of Beirut, Lebanon, Monday, Sept. 13, 2021. Saudi Arabia on Friday, Oct. 29, 2021 ordered the Lebanese ambassador to the kingdom to leave the country within 48 hours and stopped all imports from Lebanon, a response to comments by Kordahi who described the war in Yemen as a Saudi “aggression.” Kordahi s will be under pressure to quit soonest possible (AP Photo/Bilal Hussein)
Share:

BEIRUT (AP) — Saudi Arabia on Friday ordered the Lebanese ambassador to the kingdom to leave the country within 48 hours and stopped all imports from Lebanon, a response to comments by a Lebanese minister who described the war in Yemen as Saudi “aggression.”

Hours later, the Kingdom of Bahrain ordered the Lebanese ambassador to leave the country within two days for the same reason, Bahrain’s foreign ministry said.

Lebanon’s prime minister and president discussed the Saudi decision and asked the country’s information minister to take the “appropriate decision,” an apparent call for him to resign in hopes it will ease the tension.- ADVERTISEMENT -https://s.yimg.com/rq/darla/4-6-0/html/r-sf-flx.html

Saudi state media added in its report that the kingdom’s ambassador to Beirut was also asked to head back home. The report said that the move will not affect tens of thousands of Lebanese citizens and their families who live and work in the oil-rich kingdom.

The Saudi decision to ban imports from Lebanon comes at a time when the small nation is in bad need for foreign currency as it passes through its worst economic and financial crisis in its modern history. Since Lebanon’s economic meltdown began in late 2019, the Lebanese pound has lost more than 90% of its value, tens of thousands lost their jobs and now three quarters of its residents live in poverty.

Regional economic powerhouse Saudi Arabia, one of the world largest oil producers and exporters, has been a major market for Lebanese products over the decades.

The decision came days after a video circulated on social media in which Lebanese Information Minister George Kordahi described the war in Yemen as aggression by Saudi Arabia and the United Arab Emirates. He added that the war in Yemen is “absurd” and must stop because he is opposed to wars between Arabs.

Lebanon’s Prime Minister Najib Mikati’s office said he discussed the situation with President Michel Aoun before calling Kordahi and asking him to take “the appropriate decision for the sake of national interests.”

Mikati expressed regret for the Saudi move and urged the kingdom to review its decision. Mikati added that his government “categorically rejects” anything that harms the “deep brotherly relations” with Saudi Arabia.

Mikati said earlier that Kordahi’s comments do not represent the government’s opinion, reiterating that the minister spoke before taking his post last month.

Kordahi, a former TV show host, made the comments on a TV program before he was chosen for the post in September. Kordahi is close to the Christian Marada Movement, an ally of the militant Hezbollah group.

Kordahi held a news conference in Beirut this week refusing to apologize for the interview, which he said was broadcast Aug. 5. He added that since becoming a minister, he abides by the government’s policy of not expressing his opinion.

“We should not continue to be subjected to blackmail in Lebanon by anyone whether they are countries, ambassadors or individuals,” Kordahi said, adding that he has no plans to resign from the post over his comments.

Saudi Arabia says Hezbollah is helping Yemen’s Houthi rebels. Both Hezbollah and the Houthis are backed by Iran, and consider themselves part of the so-called axis of resistance that includes the Syrian government and powerful Shiite militias in Iraq.

Saudi Arabia has been a major supporter of Lebanon, but the kingdom has also been locked in a regional struggle with Iran, the main ally of the powerful Lebanese militant group Hezbollah.

Tension between the two regional powerhouses have often spilled into a deadlock in decision-making in Lebanese politics. Saudi Arabia is among the Gulf countries that imposed sanctions on Hezbollah.

Saudi Arabia lists the powerful Iran-backed Hezbollah as a terrorist organization. Relations between Saudi Arabia and Lebanon have been tense in recent months over what the kingdom says the Hezbollah’s control of the small country.