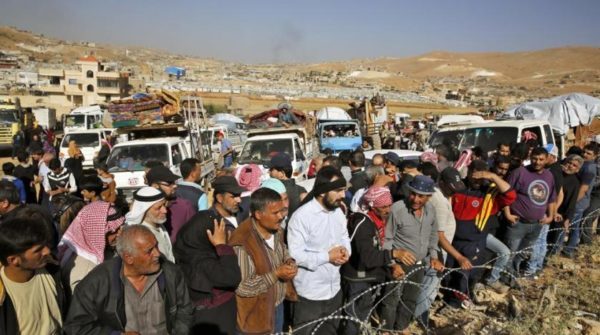 FILE PHOTO: – In this June 28, 2018 file photo, Syrian refugees gather in and near their vehicles getting ready to cross into Syria from the eastern Lebanese border town of Arsal, Lebanon. (AP Photo/Bilal Hussein)
Share:

A report titled “‘Our Lives Are Like Death’: Syrian Refugee Returns from Lebanon and Jordan” documented “grave abuse” at the hands of government forces against 65 returnees and their family members between 2017 and 2021.

Of the 65, 21 faced arrests and arbitrary detention, 13 said they were tortured, and five cases of extrajudicial killings were recorded, the report said.

“The harrowing accounts of torture, enforced disappearance and abuse that refugees who went back to Syria endured should make it patently clear that Syria is not safe for returns,” said Nadia Hardman, a researcher on refugee and migrant rights at HRW.

Refugees in Lebanon and Jordan in particular have faced mounting direct and indirect pressure to return to Syria, in violation of the principle of nonrefoulement, the rights organization said.

In September, the UN announced that the toll of identified individuals killed in the Syrian conflict had risen to 350,209, though it warned that the real number could be much higher.

New York-based HRW accused Lebanon of pursuing an “aggressive returns agenda” through measures such as the demolition of concrete shelters, curfews and forced evictions.

The situation of Syrian refugees in Lebanon has been severely exacerbated by the country’s economic crisis, with 90 percent of them left in extreme poverty, the group said.

HRW warned that the heightening pressures and lack of access to information could result in refugees feeling they have no option but to return.

The UN refugee agency estimates that over 6.6 million Syrians have been forced to seek refuge in neighboring countries.

“No country should be forcing refugees to return to Syria, so long as the Syrian government commits widespread human rights abuses,” Hardman said.

“A decade on, returning refugees are still at risk of persecution from the same government they fled.”