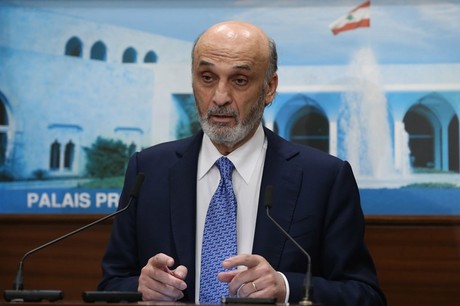 Lebanese Forces leader Samir Geagea described Thursday’s deadly clashes in Beirut districts of Tayyouneh, Ain al-Remmaneh and Shiyyah as an attempt by Hezbollah to stage a “mini” May 7-like armed campaign against “Christians” with the objective of halting the probe into the Beirut port blast.

In May 2008 Hezbollah occupied the Sunni part of Beirut and tried to occupy the Druze stronghold of Mt Lebanon but failed badly . More Hezbollah fighters were reportedly killed during the Mt Lebanon invasion than during its 2006 war with Israel

Asked whether he takes credit for “foiling a new May 7,” the LF leader said: “No, it wasn’t Samir Geagea who foiled the new May 7 but rather the people in Ain al-Remmaneh.”

“It is true that we are present on the ground, seeing as we are present in all regions and we’re not absent from any issue… but the claims about a military structure are totally baseless and the Lebanese Army is the only party that knows all the facts about the whole matter,” Geagea added in an interview with the journalist Walid Abboud via Sawt Beirut International.

. As for the talk about snipers, the army has arrested snipers, let it revea who they really are and where they came from,” the LF leader said.

Geagea stressed that it wasn’t the LF who “defended the area” but rather “all of Ain al-Remmaneh’s residents.”

“Before any shot was fired, four people from Ain al-Remmaneh had already been wounded, also before anyone from the other side was killed or wounded,” Geagea added, voicing sorrow over the Hezbollah and Amal supporters who were killed and wounded while blaming “their leaderships who dragged them into that position.”

The LF leader also criticized that the army’s Intelligence Directorate for summoning people from Ain al-Remmaneh for interrogation. “They were sitting in their homes and neighborhood. It is fine, summon them, but you should have summoned those who came to attack them,” he said in reference to Hezbollah and Amal supporters who came dressed in black

Asked whether he and the LF are “prepared for war,” Geagea said: “No, but if someone wants to attack us, we will always do this. However, this is something and having an armed organization is something else. But let no one think that we will die with open eyes; they will be very mistaken.”

“This is not a declaration of war, but our dignity is very dear to us and we do not accept to be attacked by anyone, period,” Geagea added.