A scary time in Lebanon 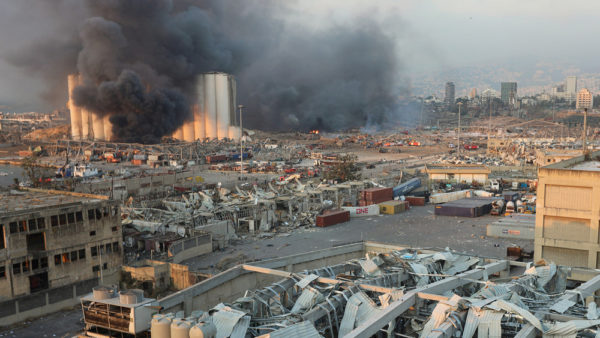 FILE – This Aug. 4, 2021 file photo, shows the towering grain silos that were gutted in the massive August 2020 explosion at the port that killed more than 218 people , wounded over 7,000, destroyed a large section of the capital and left 300, 000 homeless in Beirut, Lebanon. The lead judge investigating Lebanon’s massive port explosion issued an arrest warrant for one of several former pro Hezbollah government officials who have declined to appear before investigating judge Tarek Bitar . Hezbollah and and its allies are trying to get rid of Judge Bitar and were able to suspend his investigation twice . a move that outraged the relatives of the victims of the blast .
Share:

Yesterday was a scary day in Beirut. Protests and gunfire went on for many hours. Many of the bullets were flying very near Anera’s office. Six people died and more than 30 were injured. Thankfully, our staff was able to evacuate the office and get home safely.

I am really concerned about the safety of the country, my family, and my staff. I am concerned that what happened yesterday starts happening more often. It’s being described by some as a sectarian conflict, but I don’t think so. The main issue is that the families of the blast victims are demanding justice and that people be held accountable. Yesterday’s violence was an attempt to shift attention from the trial to something else. There may never be justice. If you live in a country where there is no justice, what do you have left? Why would young people want to stay? This, I think, is the biggest reason why so many people are leaving Lebanon. They are losing hope for a just and modern state.

On top of this upheaval is the continued deterioration of the economy.

An average person is paid 1 or 2 million Lebanese lira (LL) a month – the equivalent to the cost of 7- 8 hours of electricity by private generators. So they end up having to choose which essentials to do without. Gas or food? Electricity or medicine? A bottle of gas is now 200,000 LL and an average household needs at least two bottles a month. More and more people are rapidly falling into poverty. And these are the middle class. Imagine how bad it is for people who were living in poverty before the economic collapse.

One example is Isha, the person who cleans our Beirut office. She is a mother of four and just recently she decided she had to take her daughter out of school because of the cost of transport. It costs twice as much for her to get to school than the school fees themselves! Don’t worry, Anera has helped her with this and her daughter is back at school. This sadly is becoming a typical story. In fact, Anera has just started a new program called Sama, to slow the rates of early marriage among girls in Lebanon. Our teams have identified hundreds of cases of girls forced to leave school because their families can’t afford either their school fees or transportation fees. And this is just in one region of the country, Akkar.

No Safety Nets in Lebanon

In the past Lebanon had a social security system, which any employee would benefit from. This would provide things like pensions, hospitalization benefits, medicines. Now, this system is collapsing along with the broader collapse of the country. Can you imagine that people who worked all of their lives are now finding their savings are worthless? They are paid in Lebanese money, which has very little value. Even insurance policies aren’t working at hospitals or health clinics pending renegotiating prices and new policies.

Anera is getting more and more requests for help from people and organizations. In lieu of a government safety net, they rely on organizations like Anera for their livelihoods and even survival.

The impact of Anera’s program is much greater than anyone would imagine. Not only are Anera’s food and medicine deliveries meeting immediate needs, but also cash-for-work and vocational training programs are helping young people earn incomes and learn marketable trades.

Perhaps most important are our youth-led initiatives. They are taking action in their own communities to improve things. They bring hope. What we do is not just about saving lives. It’s about reviving hope and bringing positive change.

What hurts this country most is the loss of so many of its most talented and idealistic people. I believe that we at Anera are contributing to keeping some of this talent home.American Near East Refugee AidTo learn more about ANERA, please visit http://www.anera.org/.