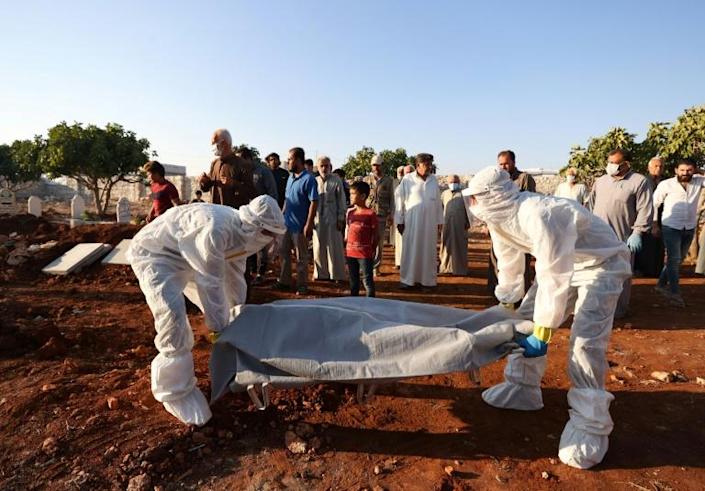 Syrian hospitals hit hard as Covid-19 cases spike Paramedics transport the corpse of a Syrian who died of the coronavirus, during a funeral on September 30, 2021 in Barisha village, Idlib province, where the number of cases has increased sharply (AFP/OMAR HAJ KADOUR)
Share:

In some of the areas most affected by the country’s decade of conflict, health infrastructure is insufficient while basic medical supplies and vaccine doses are in short supply.

While the number of cases is spiking across the country, the areas that seem worst hit by the pandemic’s latest wave are those in the north that still escape government control.

In the Idlib region, where around half of the more than three million residents were displaced by conflict, the number of recorded daily infections has increased sharply and now often tops 1,000 a day.

“From August to September the confirmed number of coronavirus cases in northwest Syria jumped by 144 percent to 71,715 as of 28 September with 1,151 deaths,” Save the Children said.

The charity said only a dozen beds in intensive care units remained for the entire region and called for emergency international assistance to avert an even bigger disaster.

“One death from coronavirus is one too many, but to hear that a baby and a 17-year-old have also been claimed is devastating,” said Sonia Khush, the NGO’s Syria response director.

“The world must not look away,” she said.

Covid-19 cases are also increasing in the country’s northeast, which is mostly controlled by an autonomous Kurdish administration, and in government areas.

The Syrian health ministry said last week that hospitals in Damascus and in the main coastal city of Latakia ahd reached full capacity.