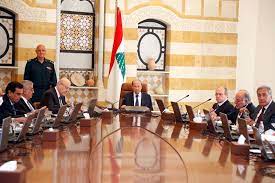 Lebanon’s cabinet met on Monday for the first time since securing Parliament’s backing to discuss plans to tackle the country’s financial meltdown and form the committee that will pursue negotiations with the International Monetary Fund.

Deputy Prime Minister Saadeh Al Shami, a former IMF official, will head the team that brings together the finance and economy ministers along with the central bank governor and two other experts, Information Minister George Kordahi said.

Prime Minister Najib Mikati, who had promised days earlier to engage creditors and enact reforms to unlock international financial support, said his Cabinet was facing a challenging mission but that its members were working as a team to ease the crisis.

The billionaire businessman was appointed to form a Cabinet after about a year of political paralysis that plunged the country further in crisis.

On his first trip abroad, he met with French President Emanuel Macron, who along with his western allies has been urging Lebanese politicians to move forward with anti-corruption reforms or risk sanctions.

During Wednesday’s Cabinet session, Mr Mikati described the meeting as positive and said France was ready to help Lebanon address its economic woes.

He had said days earlier his Cabinet would pursue an IMF deal but added it was unlikely one would be reached before end of year.

The government of his predecessor, Hassan Diab, suspended talks with the IMF after Parliament, the central bank and commercial banks opposed the financial rescue plan the leader put forward on the advice of financial advisory firm Lazard.

Lazard estimated losses in the financial system at over $80 billion, a figure that was disputed by members of Parliament, the central bank and commercial lenders but which falls in line with the IMF’s estimates.

Experts say a deal would require Lebanon to first recognise losses in the financial system and to pass a number of laws and resolutions to reform the banking sector, among other measures

Mikati said he will meet representatives from Lazard in coming days to discuss updating the financial rescue plan while his economy minister said on Wednesday that all parties were working in “harmony” to agree on the size and distribution of losses.

Lebanon’s crisis has intensified in recent months as the central bank cut its subsidies on fuel and other vital commodities to protect its dwindling currency reserves.

The shortages have led to frequent power cuts and sparked violence among consumers over access to gasoline and diesel used to power up private generators that compensate for state power rationing.

Energy Minister Walid Fayyad said on Wednesday that the government would seek to boost the power supply before deciding to raise electricity tariffs. The Cabinet decided on Wednesday to ask the central bank to provide a $100 million dollar loan for the state-run power company.

The central bank said on Wednesday that it was extending a circular that allowed the withdrawal of dollar savings in Lebanese pounds at an exchange rate of 3,900 pounds, implying over 80 per cent loss on deposits, with the dollar trading at 17,000 pounds at exchange shops.

A number of members of Parliament had called on the central bank to raise the exchange rate for cash withdrawals to 10,000 pounds.

The bank, however, said any change to the rate before a comprehensive financial plan is endorsed by the government would increase the money supply and affect the exchange rate.

The Lebanese pound, which is officially pegged to the dollar at 1,507, has lost more than 90 per cent of its value since the crisis unfolded in late 2019.

The World Bank has described the economic crisis as one of the most severe since the 1850s. The crisis prompted Lebanon’s first default in 2020, and has plunged more than half of the population into poverty.