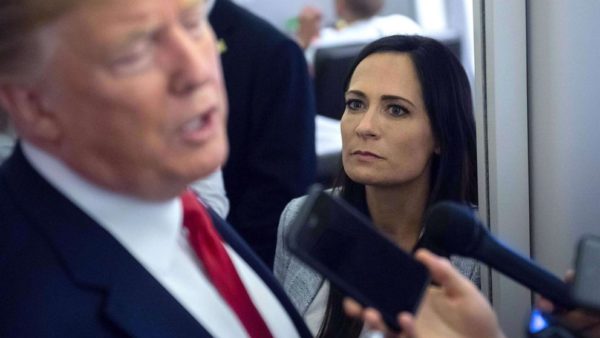 In her book, titled “I’ll Take Your Questions Now,” Ms. Grisham recalls her time working for a president she said constantly berated her and made outlandish requests, including a demand that she appear before the press corps and re-enact a certain call with the Ukrainian president that led to Mr. Trump’s (first) impeachment, an assignment she managed to avoid.

“I knew that sooner or later the president would want me to tell the public something that was not true or that would make me sound like a lunatic,” Ms. Grisham writes, offering a reason for why she never held a briefing.

After serving as press secretary, Ms. Grisham worked in Melania Trump’s office. She resigned on Jan. 6 as a horde of Trump supporters attacked the U.S. Capitol. Her book was kept a secret from her closest allies in the White House, though by the time she departed Washington that number had dwindled. (She writes that, months before the election, she had moved to Kansas.) Her publisher, HarperCollins, calls the book “The most frank and intimate portrait of the Trump White House yet.”

The former president and his advisers have already moved to discredit Ms. Grisham’s account, and have used increasingly personal terms to disparage her.

“Stephanie didn’t have what it takes and that was obvious from the beginning,” Mr. Trump said in a statement on Tuesday. He said she had become “very angry and bitter” after a breakup. “She had big problems and we felt that she should work out those problems for herself. Now, like everyone else, she gets paid by a radical left-leaning publisher to say bad and untrue things.”

In her book, Ms. Grisham offered a pre-emptive response to the criticism: “This is not, by the way, a book where you need to like me.”

Here are some highlights from the manuscript obtained by The New York Times:

A (fleetingly) tough stance toward Putin is just for show

Ms. Grisham lands on a well-documented theme when she explores Mr. Trump’s love of dictators. But she says Mr. Trump went out of his way to please one in particular: Mr. Putin, whose cold reception of Mr. Trump, she writes, seemed to make the president want to impress him even more.

“With all the talk of sanctions against Russia for interfering in the 2016 election and for various human rights abuses, Trump told Putin, ‘Okay, I’m going to act a little tougher with you for a few minutes. But it’s for the cameras, and after they leave we’ll talk. You understand,’” Ms. Grisham writes, recalling a meeting between the two leaders during the Group of 20 summit in Osaka in 2019.

During that meeting, Ms. Grisham listened to Fiona Hill, Mr. Trump’s top adviser on Russia who later became an impeachment witness, who observed what she said were Mr. Putin’s subtle efforts to throw Mr. Trump off guard.

“As the meeting began, Fiona Hill leaned over and asked me if I had noticed Putin’s translator, who was a very attractive brunette woman with long hair, a pretty face, and a wonderful figure,” Ms. Grisham writes. “She proceeded to tell me that she suspected the woman had been selected by Putin specifically to distract our president.”

While he was in the White House, Mr. Trump’s targets included a young press aide whom Ms. Grisham says the president repeatedly invited up to his Air Force One cabin, including once to “look at her,” using an expletive to describe her rear end. Mr. Trump, she writes, instructed her to promote the woman and “keep her happy.” Instead, Ms. Grisham tried to keep her away from the president.

During an Oval Office rant about E. Jean Carroll, who has accused Mr. Trump of raping her in the 1990s, Mr. Trump first insults Ms. Carroll’s looks. Then he gazes into Ms. Grisham eyes and says something that unnerves her.

Ms. Grisham also confirms what she and Melania Trump had long denied: That the first lady was angry after several reports of her husband’s infidelities — and hush money payments — surfaced in the news media.

To the contrary: “After the Stormy Daniels story broke and all the allegations that followed from other women,” Ms. Grisham writes, “I felt that Mrs. Trump was basically unleashed.”

The first lady, she says, found ways to omit her husband from photos and tweets, and made it a point to show up on the arm of a handsome military aide. Mrs. Trump, who is closed off to even her closest aides, begins to open up to Ms. Grisham, telling her that she doesn’t believe her husband’s denials or those from his former fixer, Michael Cohen — “Oh, please, are you kidding me?” she asks at one point. “I don’t believe any of that,” the first lady adds, using an expletive. (This book, it should be said, contains a lot of expletives.)

Ms. Grisham also attempts to illuminate why Mrs. Trump wore a jacket inscribed with the phrase “I Really Don’t Care, Do U?” to visit a Texas camp for child migrants, but focuses more on the president’s reaction: “What the hell were you thinking?” he asked Ms. Grisham and his wife in the Oval Office, before instructing an aide to tweet out a cover story: “You just tell them you were talking to the” news media, he told the group.

The first lady grew more disengaged over time, Ms. Grisham writes, to the point where she was asleep on election night. She was overseeing a photo shoot of a rug on Jan. 6 and declined to comment publicly on what has happening at the Capitol. (For Ms. Grisham, this was the last straw. She resigned later that day.)

In the end, the first lady sided with her husband, doubting the election results — “Something bad happened,” she told Ms. Grisham — and declined to invite Jill Biden, the incoming first lady, to the White House for tea.

“She would always say, ‘Let me think about it’ or ‘Let’s see what the West Wing will do,’” Ms. Grisham writes, “Which meant no. And when exactly did she decide to start following the West Wing’s lead?”

Demands to evict the press from the White House

Ms. Grisham says that a trip to North Korea inspired Mr. Trump to ask her to research ways the press could be permanently evicted from the James S. Brady Briefing Room.

“I researched different places we could put them other than the press briefing room. Each time the president asked me about my progress on the matter, I let him know I was still working on options,” Ms. Grisham writes.

As she tries to please Mr. Trump, whose press coverage was relentlessly negative, she describes his anger toward her and others as “terrifying”: “When I began to see how his temper wasn’t just for shock value or the cameras,” she writes, “I began to regret my decision to go to the West Wing.”

She says one frequent target of Mr. Trump’s ire was Pat Cipollone, who served as White House counsel: “He didn’t like them telling him that things he wanted to do were unethical or illegal. So he’d scream at them. But then he’d usually listen. And then yell at them again later.”

(There were other indignities: Ms. Grisham writes that Mr. Trump called her while aboard Air Force One to defend the size of his penis after Ms. Daniels insulted it in an interview. “Uh, yes sir,” Ms. Grisham replied.)

At one point, she writes, Mr. Trump’s handlers designated an unnamed White House official known as the “Music Man” to play him his favorite show tunes, including “Memory” from “Cats,” to pull him from the brink of rage. (The aide, it is revealed later, is Ms. Grisham’s ex-boyfriend. She does not identify him, but it is Max Miller, a former White House official now running for Congress with Mr. Trump’s support.)

She was a close-up observer of Mr. Trump’s obsession with control, and details a scene in which the president undergoes a colonoscopy without anesthesia — though she doesn’t name the procedure — because, she reasons, even temporarily assigning power to the vice president would have been “showing weakness.”

In the end, Ms. Grisham stood by as three chiefs of staff, two press secretaries, and countless other aides resigned. She notes that Ivanka Trump, the president’s daughter, and Jared Kushner, his son-in-law, seemed to grow more powerful.

Ms. Trump, she said, made it a point to insert herself into meetings where she did not belong, including when she demanded that her father address the nation from the Oval Office during the early days of the pandemic. But Ms. Grisham reserves special ire for Mr. Kushner, whom she calls “Rasputin in a slim-fitting suit.” (At one point, Mr. Trump warns her not to get on Mr. Kushner’s bad side.)

“The truth was that pretty much everyone eventually wore out their welcome with the president,” Ms. Grisham writes. “We were bottles of milk with expiration dates.”

The former press secretary adds, “I should have spoken up more.”