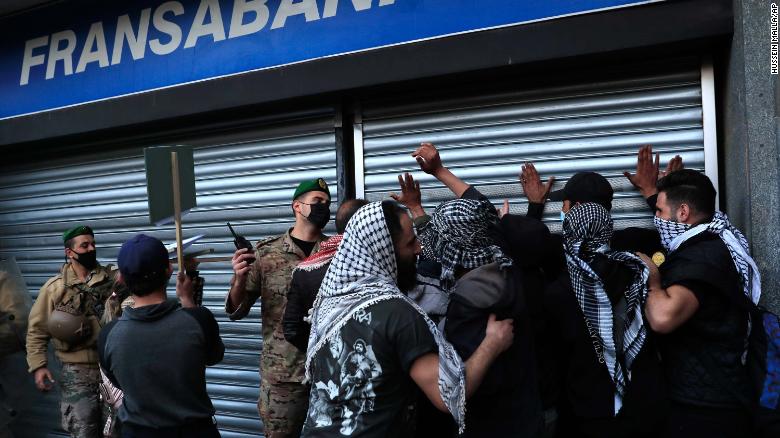 File photo: A Lebanese army officer, center, pushes back protesters who were trying to break a bank door, during a protest demanding that local banks allow them to withdraw their money that have been blocked amid Lebanon’s severe economic crisis, in Beirut, Lebanon, Friday, Feb. 26, 2021. Since 2019, the Lebanese currency so far has lost over 90% of its value and banks have imposed controls on withdrawals and transfers to protect dwindling foreign reserves. (AP Photo/Hussein Malla)
Share:

Lebanon bond investors could see their holdings slashed by 75%, Goldman Sachs said, should the newly formed government solve losses in the financial system, embark on credible reforms and unlock funding from the International Monetary Fund.

Lebanon defaulted on its international debt in March 2020, after years of political upheaval and economic mismanagement left it unable to service a debt burden that Goldman Sachs estimated at over 300% of GDP at current market exchange rates.

After a year of political deadlock, a new government was formed this month under Najib Mikati, with three-quarters of the population now in poverty after one of the deepest depressions of modern history.

“The ratification by parliament of the Mikati government on Monday represents the first step on a long and narrow path to Lebanese economic recovery that is likely to be fraught with difficulty and risk”, Reuters quoted Goldman as saying in a report this week.

The bank’s debt recovery projections are based on assumptions including a strengthening of the Lebanese pound to 8,000 to the dollar in the medium term from around 14,500 in the parallel market currently, as well as negative or low real interest rates on public debt, and certain levels of economic growth and fiscal balance adjustment.

“Given these assumptions and constraints, we arrive at an estimated haircut to the nominal value of the current Eurobonds of 75%”, it said.

Resolving losses in the financial system will be the government’s first challenge, Goldman said, estimating foreign exchange liabilities in the banking sector at $70 billion, against $13 billion in usable reserves at the central bank.

It would also need to launch comprehensive reforms to address the weaknesses that have led Lebanon to the crisis.

“Given our view that an IMF program is necessary for Lebanon, early engagement with the fund is an important pre-requisite for discussions with creditors and an eventual resolution of the default”, Goldman said.