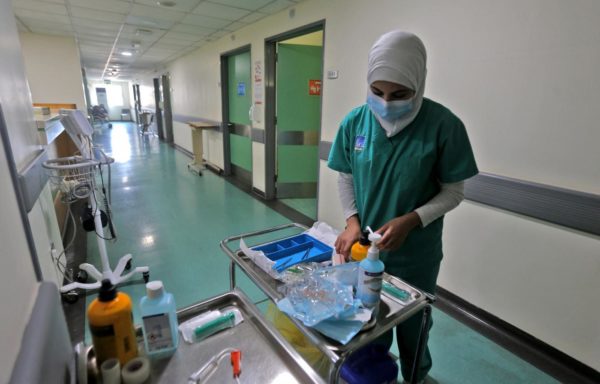 A nurse works at a ward of the Rafic Hariri University Hospital (RHUH) in Lebanon’s capital Beirut on 23 July 2021 (AFP). Lebanon’s health care sector has been witnessing an “alarming” brain drain with at least a third of medical staff having left the country in less than two years, the World Health Organisation (WHO) reported on Sunday.
Share:

Lebanon’s health care sector has been witnessing an “alarming” brain drain with at least a third of medical staff having left the country in less than two years, the World Health Organisation (WHO) reported on Sunday.

The sector is under intense pressure, and is already struggling because of mass fuel and medicine shortages amid a devastating economic crisis.

WHO director general Tedros Adhanom Ghebreyesus and the organisation’s regional director, Ahmed al-Mandhari, visited Beirut last week, and raised the alarm over the impact of the ongoing crisis – believed to be among the worst in the world since the 1850s – on health in the country.

“Fuel shortages are causing most hospitals to operate at only 50 percent capacity,” said a WHO statement published on Sunday. “Basic and life-saving medicines are in short supply, with restrictions in foreign currency severely limiting importation of medicines and medical goods.”Beirut: A day in the life of a ‘ghost city’Read More »

Just as concerning, the international organisation noted, was the flight of many health care workers from the country, with an estimated 40 percent of doctors and 30 percent of nurses having left Lebanon “either permanently or temporarily”.

“A brain drain is occurring at alarming speed,” the WHO stated, adding that the situation was further worsened by the Covid-19 pandemic and the impact of the country’s collapse on mental health.

“The challenges before us are immense and threaten the many significant health gains that Lebanon had made over the last decades,” the WHO warned. “We cannot afford to leave behind those most vulnerable and in need. Access to essential and life-saving health services must be preserved at all costs – including for migrants and persons with disabilities.”

Lebanon’s currency has lost over 90 percent of its value since October 2019, leaving many people unable to afford basic necessities, hitting industry and devastating all sectors of the economy. The worsening situation has caused mounting frustration on the streets.

Lebanon is facing growing shortages of some essential goods, and has recently ended subsidy programmes for bread, fuel and medicine. In recent months, hundreds of cars have queued up at petrol stations, as drivers fill their tanks with increasingly rationed fuel.

Many people have struggled to obtain essentials such as baby formula or sanitary towels. The cost of menstrual products has risen by almost 500 percent since the start of the financial crisis. Meanwhile, many pharmacies have gone on strike as they struggle to import medicines.

The crisis has been further worsened by the hoarding of vital supplies. Medical suppliers have told hospitals that they are out of stock, but many have actually hoarded their supplies to sell at a higher price.

Meanwhile, hospitals have warned that fuel shortages could have deadly consequences on patients.