To rehabilitate Al Assad, Iran may have to rein in Hezbollah 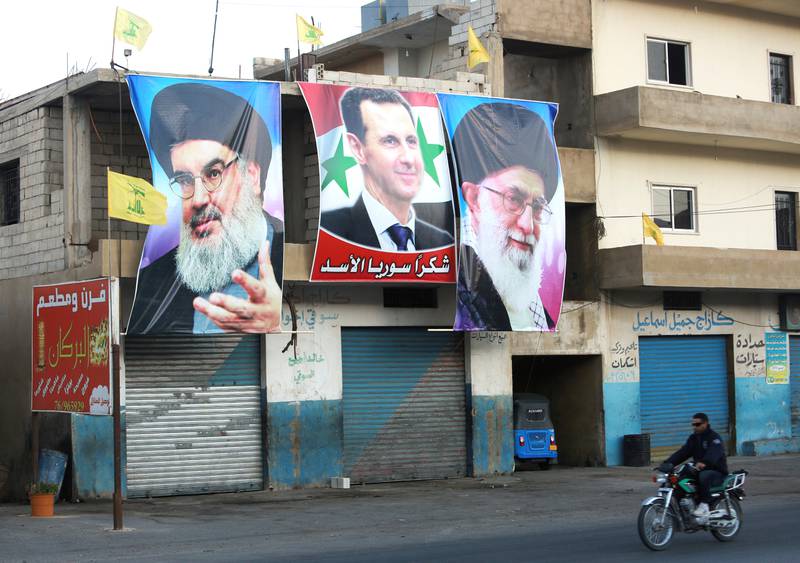 Iran, Syria and Hezbollah have reshaped geopolitics in the Levant with their alliance. Reuters
Share:

The rehabilitation of Syrian President Bashar Al Assad with the help of his ally Russia has reached a critical milestone in recent weeks. Lebanon, long considered by Syria a strategic depth, is being used as a testing ground. The question of what to do about Hezbollah is at the heart of this effort, which could eventually invalidate the logic and purpose of the group’s militancy. For Mr Al Assad and Hezbollah alike, what is happening now is about swallowing bitter medicine and making concessions.

Believing he is the victor at home and in the region, Mr Al Assad is reluctant to make many concessions and behaves as though he will remain Syria’s President indefinitely. His alliance with Russia, Iran and Hezbollah have managed to turn that weakness into a strength. He wields his obstinacy and his powerful foreign alliances against Syria’s internal opposition as well as against the US and Turkey.

So it may have been difficult for him when Russia’s Foreign Minister Sergei Lavrov said earlier this month that Moscow considers Israel’s security to be a top priority in the context of the Syrian war and other conflicts. Israel had earlier expressed concerns to Moscow regarding the implications of a US withdrawal from Syria, fearing that it would empower Iran there and embolden Mr Al Assad to attempt to recover the Israel-occupied Golan Heights. Moscow is thought to be encouraging Damascus to save any enthusiasm for taking back the Golan Heights for another day.

It is possible that this means Iran, another Russian ally, has agreed to rein in any Hezbollah plans to mount any serious attack against Israel. This would put Hezbollah’s arsenal, which the group says exists solely to resist Israel and liberate occupied Arab lands, now lies in deep freeze in the Russian-Iranian refrigerator. Its real purpose is perhaps purely propagandistic.

Assessing precisely Hezbollah’s position in the home front, the region and the world is not easy. There are at least two views here.

One is that Iran’s approach is uncompromising, and therefore the same can be said for Hezbollah’s. From this perspective, Lebanon is effectively under Iranian occupation enforced by Hezbollah by dominating all aspects of the Lebanese state and its sovereignty. Tehran will know how to play the Russians and Americans, while preserving its precious cards in the form of proxies across the region, no matter what happens. Therefore, Hezbollah will increase its domination of Lebanon while the West looks the other way, and will continue to control the decision for war and peace in the country at the behest of the IRGC. Indeed, Hezbollah and its supporters still behave with triumphalism, most recently celebrating the arrival of Iranian fuel shipments via Syria with Iranian flags and Mr Al Assad’s portraits, rather than the Lebanese flag. No doubt, Mr Al Assad is elated. Iran’s fuel shipments and electricity and gas supplies are a gift to him from the Biden administration, wrapped in the guise of humanitarian aid to Lebanon.

But the other view sees Iran’s commitments to European powers, Russia and China as ushering in new roles for Hezbollah, the oldest and strongest foreign policy arm of Iran’s Islamic Revolutionary Guard Corps.

The proponents of this view believe that the formation of the new Lebanese government under Najib Mikati – despite the wrangling over interests, the bargains made, the questions around its technocratic credentials and the restoration of the same old political class – is a step to lead Lebanon out of a path towards collapse and war, and assures its survival.

Change in Lebanon, this view contends, will not come from outside and will take a long time, and that its first milestone will be the legislative election under international oversight and with serious popular participation, rather than revolutions and uprisings, which have proven to be unsustainable.

From this perspective, Hezbollah’s domination over Lebanon is also unsustainable, because the arc of gradual political reform and stability in the country’s diverse society bends towards consensus. In other words, if Iran’s superpower allies want to see Lebanon stable, then Hezbollah’s weapons there become impotent.

The same could be said of Hezbollah’s weapons in Syria, where Moscow is drawing red lines for Mr Al Assad and his allies. Partnership is one thing, and hierarchy is another. In the thinking of Russian diplomacy, many roadmaps are taking shape in the greater Middle East and the Gulf, where Moscow wants to broker security pacts between Iran, Israel, and the Arab states. If that is the situation, then reining in Hezbollah would form a natural part of the ensuing strategy. And that would say a great deal about the sacrifices necessary to see an Iran-Syria-Hezbollah nexus that the world’s superpowers could learn to live with.