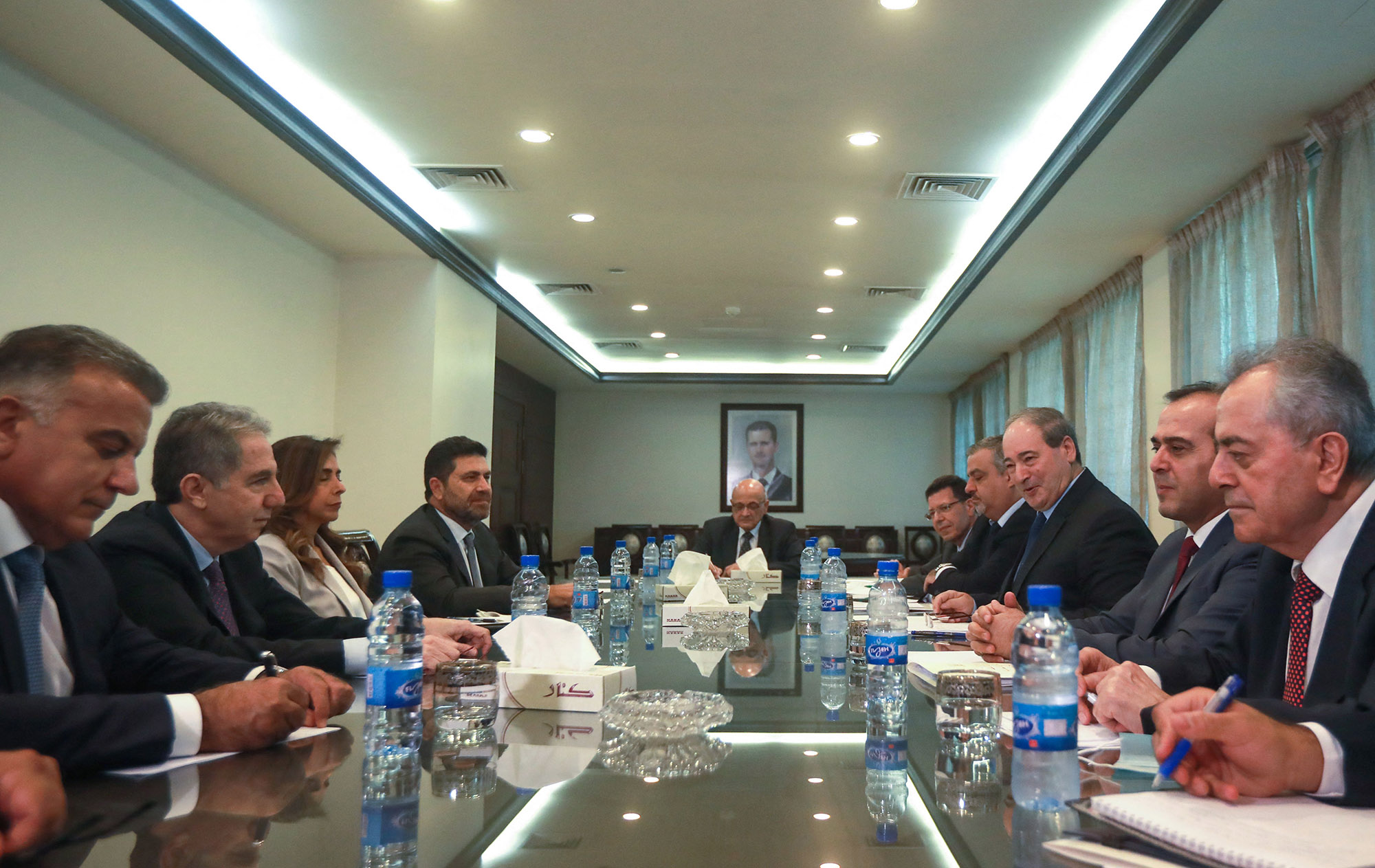 Syrian Foreign Minister Faisal Miqdad (R C) and other cabinet members meet with an official Lebanese delegation including (L – front to back ) the General Security apparatus’s chief, Abbas Ibrahim, Ministers of Finance Ghazi Wazni, of Foreign Affairs Zeina Akar, and of Energy and Water Raymond Ghajar, in the capital Damascus on September 4, 2021. – Lebanese officials are in a visit to Damascus to discuss plans to import Electricity from Jordan through wartorn Syria’s territory in what would mark the first official diplomatic visit during the 10-year-old conflict. (Photo by Louai Beshara / AFP) (Photo by LOUAI BESHARA/AFP via Getty Images)
Share:

The plan involves using Egyptian gas to generate electricity in Jordan that will then be transmitted via Syria to Lebanon.

Syria said on Saturday that it welcomed Lebanon’s request to import Egyptian gas for energy generation via its territory after Lebanese ministers made the highest-level visit to Damascus in years.

Lebanon is suffering energy shortages that have forced even essential services including hospitals to shut down or scale back operations. The crisis is the result of a wider financial meltdown that has devastated the economy since 2019.

The delegation, led by Zeina Akkar, who holds several positions in Lebanon’s caretaker government including the foreign minister, aimed to pave the way for a US-backed plan to ease the power shortages in Lebanon by transmitting electricity via the Syrian grid.

“The Syrian side welcomed the request and assured it was ready to oblige it,” Nasri Khoury, secretary-general of the Lebanese Syrian Higher Council, said in a brief statement after the meeting.

The plan involves using Egyptian gas to generate electricity in Jordan that will then be transmitted via Syria to Lebanon.

US sanctions on Damascus are a complicating factor in any effort to help Lebanon via Syria, but congressmen visiting Beirut this week have said Washington is looking at ways to urgently deal with those hurdles.

US Ambassador to Lebanon Dorothy Shea has also said there was a will to make the plan happen.
Syrian Foreign Minister Faisal Mekdad received the Lebanese delegation at the border on arrival on Saturday, which also included the ministers of energy and finance.

Lebanese government officials had mostly avoided Syria since the war began there in 2011 as Beirut adopted a policy of staying out of regional conflicts, even as the Shia group Hezbollah fought in support of Damascus.