US warns against Iranian fuel shipments to Lebanon 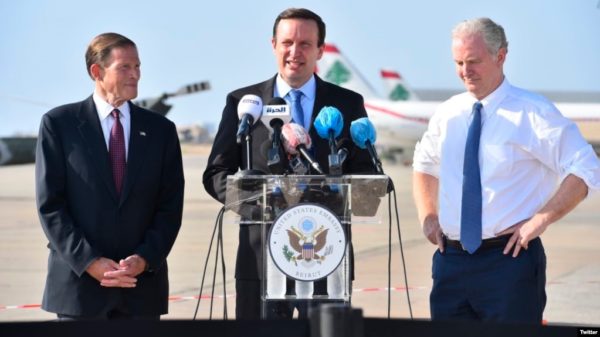 Four visiting U.S. senators told Lebanese officials on September 1 that the United States was eager to help that country tackle its fuel shortages but warned against Beirut seeking to import Iranian oil to alleviate the problem.

The Democratic senators said turning to Iranian supplies could have “severely damaging consequences.”

The visit follows statements last month from the leader of the Iran-backed Hezbollah militant group suggesting an Iranian fuel tanker was en route to Lebanon and that others would follow.

The United States has clamped down with tougher sanctions against Iran since Washington withdrew from a nuclear deal between Tehran and world powers in 2018.

The senators’ visit also comes with Lebanese politicians unable to form a government for over a year, which could enable negotiations with international financial institutions to help address Lebanon’s economic crisis.

“It is inexcusable that in the middle of this life-threatening crisis, the political leaders in Lebanon have refused to make the tough choices in order to form a government,” Senator Chris Murphy of Connecticut said near the end of the two-day visit.

Hassan Diab and his government resigned days after a devastating blast at Beirut’s port that killed at least 218 people, wounded some 6,000, and damaged huge swaths of the city.

The World Bank has described Lebanon’s economic crisis as one of the world’s most severe since the 1850s.

Update: Reports emerged in Lebanon on Thursday indicating that the first Iranian fuel tanker that was shipped to Hezbollah has entered Syria’s territorial waters and is loaded with diesel fuel and other tankers will be arriving soon

But the organization Tanker Trackers.com disputed the information, noting that “first tanker has not reached the Suez yet. – Second tanker hasn’t left Iran yet but has left port. – Third tanker is leaving Iran. It normally takes 10-12 days to reach the Suez. Normally.”