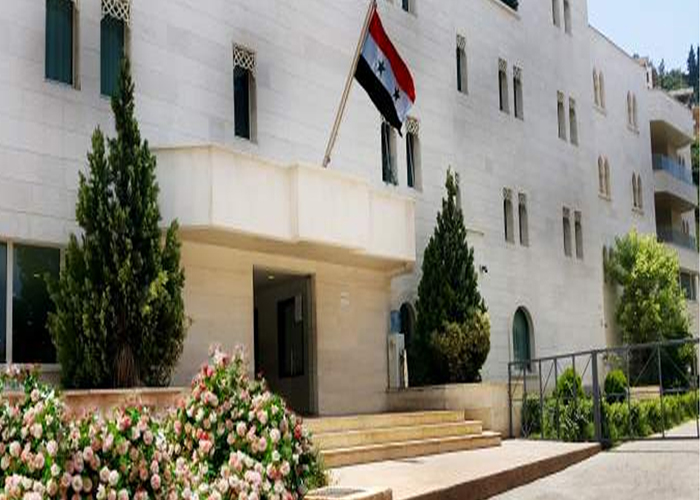 File photo of the Syrian Embassy near Beirut, Lebanon
Share:

After days of speculation regarding their whereabouts, Lebanese authorities confirm the arrests of six men last seen entering the Syrian embassy near Beirut to pick up their passports

The Lebanese Army, following days of contradictory reports, announced on Saturday in a statement that it had arrested six Syrian nationals for allegedly entering the country illegally

Two of those arrested were transferred to Lebanon‘s General Security, the army said, without providing details on the locations of the other four. The border agency initially denied holding any of the missing Syrian nationals prior to confirmation from the army’s press office

Five of the six men have been identified as Tawfik al-Haj, Mohammad Abdelillah al-Waked, Mohammad Saeed al-Waked, Ahmad Ziad al-Eid and Ibrahim Majed al-Shammari. It has been reported that several of those arrested had been affiliated with the Syrian opposition movement.

The army’s announcement came days after news surfaced that five men from Daraa provincewent missing at the Syrian embassy near the Lebanese capital. The detentions allegedly took place after embassy staff told the men to come pick up their Syrian passports.

Middle East Eye obtained the number of one of the missing men and tried to contact him on WhatsApp, but there was no reply.

‘Arrested inside the embassy’?

A relative of one of the missing men told MEE that they had received a call from a private number, introducing themselves as Lebanese intelligence and telling them that their family member had been detained for entering the country on 18 August illegally.

“They do not have personal identification papers so they cannot enter Lebanon legally,” one of the relatives said. “They went to the Syrian embassy to try to get a passport processed the day after they arrived.”

Embassy staff originally told them their passports would be processed on 25 August, but when they went back to the embassy that day, they were asked to return two days later, the relative told MEE.

It is still unclear whether those detained were arrested at the Syrian embassy or nearby, and the Lebanese Army’s statement does not specify where exactly they were apprehended. One relative of the missing told MEE that they are adamant that the men were arrested at the embassy.

Another relative, also insisting that the men were arrested from within the embassy, told MEE that they were seeking to obtain passports so that they could leave the country “to find safety,” given the deteriorating situation back home in Daraa.

“They were arrested inside the embassy, we had been in touch with them through each step there,” he said.

“We call on the Lebanese authorities to check the Syrian embassy’s security cameras and reveal the fate of my family members.”

Syrian Ambassador to Lebanon Ali Abdul Karim denied that embassy staff led the arrest of the men, but he did not deny that Lebanese security agencies had detained several Syrian nationals near the embassy due to “security matters”.

“I will follow up on the matter, and I hope we get some clarity,” Abdul Karim said on Lebanon’s Al Jadeed TV. “And if there are security problems with some of our Syrian brethren, then that is a matter for the Lebanese authorities.”

The ambassador added that there are security cameras at the embassy, which is communicating with the Lebanese Army and security agencies.

Neither the Lebanese Army nor General Security responded to MEE’s requests for comment.

There are just over 850,000 Syrian refugees in Lebanon registered with the United Nations, though the total number of Syrians in the country is about 1.5 million.

Amnesty International’s Syria researcher Diana Semaan told MEE that she believes there is some sort of link between the recent arrest and the escalation of hostilities in besieged Daraa, as negotiations between government and opposition forces remain at a stalemate.

es since late June. According to Amnesty International, the besieged area contains about 20,000 people, many of whom are struggling to find adequate food, water and medicine.

Meanwhile, the government has demanded that former rebels in Daraa hand over weapons, sparking tensions and attacks across the province between opposition and government forces.

Four of the men who were arrested hail from the north Daraa town of Inkhil, known for organising large anti-government protests against Syrian President Bashar al-Assad during the beginning of the uprising in 2011.

At least one of the six arrested is a defector from the Syrian army and therefore banned from getting a passport inside Syria, a family member told MEE. Meanwhile, relatives said several others were members of the 8th Brigade of the Russian-backed Fifth Corps, an alliance of five Syrian rebel groups formed in September 2014 that had, for a time, reconciled with government forces.

During its start, hundreds of rebels joined the 8th Brigade despite widespread reports of secret arrests and assassinations of its members that were believed to have been carried out by Syrian intelligence.Syria: Residents of Daraa al-Balad struggle to survive under siegeRead More »

Contrary to what was agreed, Russia in May moved the former rebel fighters to an expansive desert region known as the “Badia” in eastern Syria to fight the Islamic State group, exposing them to significant losses especially after the sudden withdrawal of pro-Iranian forces from the area. Many of the fighters withdrew from the desert region and returned to Daraa, so Russia suspended their salaries, adding to conditions pushing many of those in the region to flee Syria altogether.

For their part, the six men arrested in Beirut seem to have chosen to flee Daraa and cross into Lebanon illegally, hoping to sort out their status after the fact by putting in an expedited request for a passport at the embassy.

According to locals, an expedited Syrian passport costs about $825 – very high, given local wages – and takes about two days. The other option takes around three months and costs $325, or about eight months’ worth of wages on the average government salary.

“They received a call from the Syrian Embassy in Lebanon on Thursday evening stating that their passports were ready and to come and pick them up,” said one of the family members, telling MEE that the men entered the embassy and were not heard from again