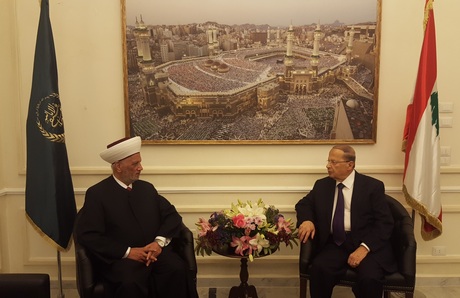 Lebanon is heading towards complete collapse unless action is taken to remedy the crisis caused by its financial meltdown, Grand Mufti Sheikh Abdul Latif Daryan , the state’s most senior Sunni Muslim cleric, warned on Friday.

The Grand Mufti hit out at President Michel Aoun over his “hell” remarks as he threw his support behind caretaker PM Hassan Diab in connection with the port blast investigation.

“I advise the President, General Michel Aoun: try to rescue what’s left of your tenure, or else we would be heading toward complete collapse and toward the bottom of hell, not to hell as you have promised us,” Daryan said at the opening ceremony of a mosque in the Shatila area.

Addressing the issue of Judge Tarek Bitar’s subpoena of caretaker PM Hassan Diab in the port blast case, Daryan warned that “the Premiership position is not less important or prestigious than any other top post in Lebanon.”

“Its respect is a must and we are keen on keeping this position preserved in order to maintain balance among the three 3 top positions (Presidency, Speakership and Premiership),” the mufti added.

“The targeting of the caretaker PM, Dr. Hassan Diab, is deplorable ” Daryan went on to say.

In Lebanon, the president must be a Maronite Christian, the PM a Sunni Muslim and the speaker Shiite Muslim

Daryan added: “Let all immunities be lifted through the issuance of a law in this regard by parliament, and let justice take its course properly toward everyone, away from selectivity and malice.”

They questioned why Bitar didn’t also subpoena president Michel Aoun , over the Beirut Port blast since he also knew about the illegal chemicals stored at the pert at the same time Diab was informed .

The memo stated that Diab had received a subpoena to appear before Bitar on August 26, adding that Bitar has “no jurisdiction, according to the constitution and law.”

This issue is being looked into by parliament in order to take “the necessary measures.”

Bitar subpoenaed Diab for interrogation on September 20 after his failure to show up for questioning on Thursday.