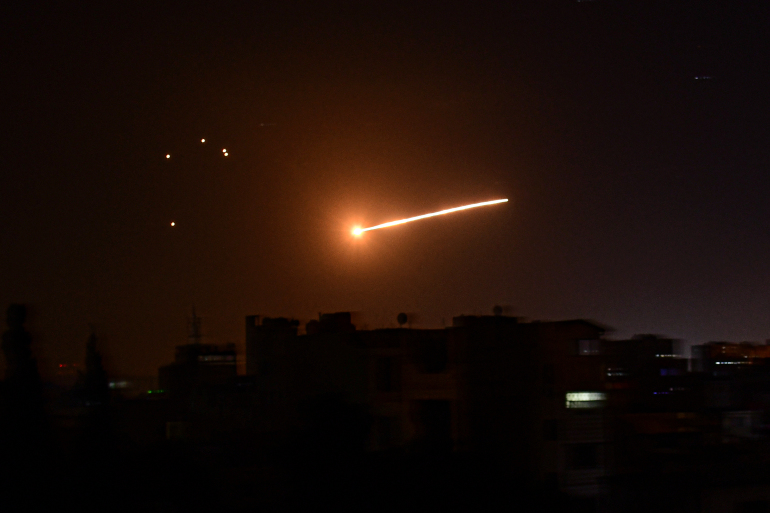 Hours after Lebanon’s Hezbollah said it had secured a shipment of Iranian fuel for the struggling Mediterranean nation, neighboring Syria has reported that it was under attack by Israel, which has sought to disrupt supply networks among its three foes.

“At approximately 23:03 this evening, the Israeli enemy carried out an aerial aggression with rockets from the direction southeast of Beirut, targeting some points in the vicinity of the city of Damascus and the vicinity of the city of Homs,” the Syrian Ministry of Defense said in a statement Thursday. “Our air defense systems intercepted the enemy missiles and downed most of them.”

“The results of the aggression are now being assessed,” it added.

The attack would be the second of its kind in just two days after reports of a previous Israeli air raid on a site in the Quneitra region, opposite the Israel-occupied Golan Heights.

Reached for comment regarding the latest attack, the Israel Defense Forces first told Newsweek that it was looking into the reports, then declined to weigh in as a matter of policy.

“We don’t comment on reports in the foreign media,” an IDF spokesperson said.

Earlier on Thursday, the Lebanese Armed Forces reported that from 10:50 p.m. through 1:05 a.m. “two air violations were recorded by two Israeli enemy reconnaissance planes, during which circular flights were carried out over the areas of Beirut and its suburbs, Baabda, Aley, Al-Matn and the south.

“The issue of the breaches is being followed up in coordination with the United Nations Interim Force in Lebanon,” the Lebanese military added.

Syria, itself beset by deep-seated economic woes and a decade-long civil war, has already offered health assistance to Lebanon as the two attempt to cope with the COVID-19 pandemic.

But as Lebanon’s turmoil threatens to completely empty the country’s fuel supply, Hezbollah Secretary-General Hassan Nasrallah announced Thursday that his group’s international ally, Iran, was sending a shipment of fuel to Lebanon in defiance of U.S. sanctions on the Islamic Republic.

“This ship will be followed by another ship and other ships,” Nasrallah said during an address marking the Islamic commemoration of Ashoura, adding: “We gave priority on the first ship to diesel because it is a top priority and is linked to people’s lives.”

And he warned that any attempts to disrupt the ship would be considered an attack on Lebanon, a veiled reference to other recent attacks attributed to Israel on Iranian vessels providing fuel to Syria.

Iran too has been accused by both the United States and Israel of targeting vessels, mostly in the Gulf of Oman, where a string of unclaimed incidents date back to 2019, a year after former U.S. President Donald Trump abandoned a 2015 multilateral nuclear deal and imposed strict economic restrictions on Iran.

In his remarks, Nasrallah blamed the U.S. for Lebanon’s hardships, as well as those of Syria at the U.S. maintains troops alongside partnered local forces near oil and gas resources outside the control of Damascus.

Shortly after, US ambassador to Lebanon Dorothy Shea dismissed the Hezbollah chief’s comments in an interview with Saudi Arabia’s Al Arabiya.

“The United States is as frustrated as the Lebanese are with the situation, and I’ve been working on this for several weeks now. So, to be accused of being the sole source of this problem … ad hominem personal attacks are the weakest form of argument,” Shea said.

“And if that’s all he can muster to explain the misery that the Lebanese people are living in, then shame on him,” she added.

Earlier today former Lebanese PM Saad Hariri commented on Nasrallah’s speech by stating : “The fuel crisis in Lebanon is due to the smuggling of fuel from Lebanon to the Syrian regime.”