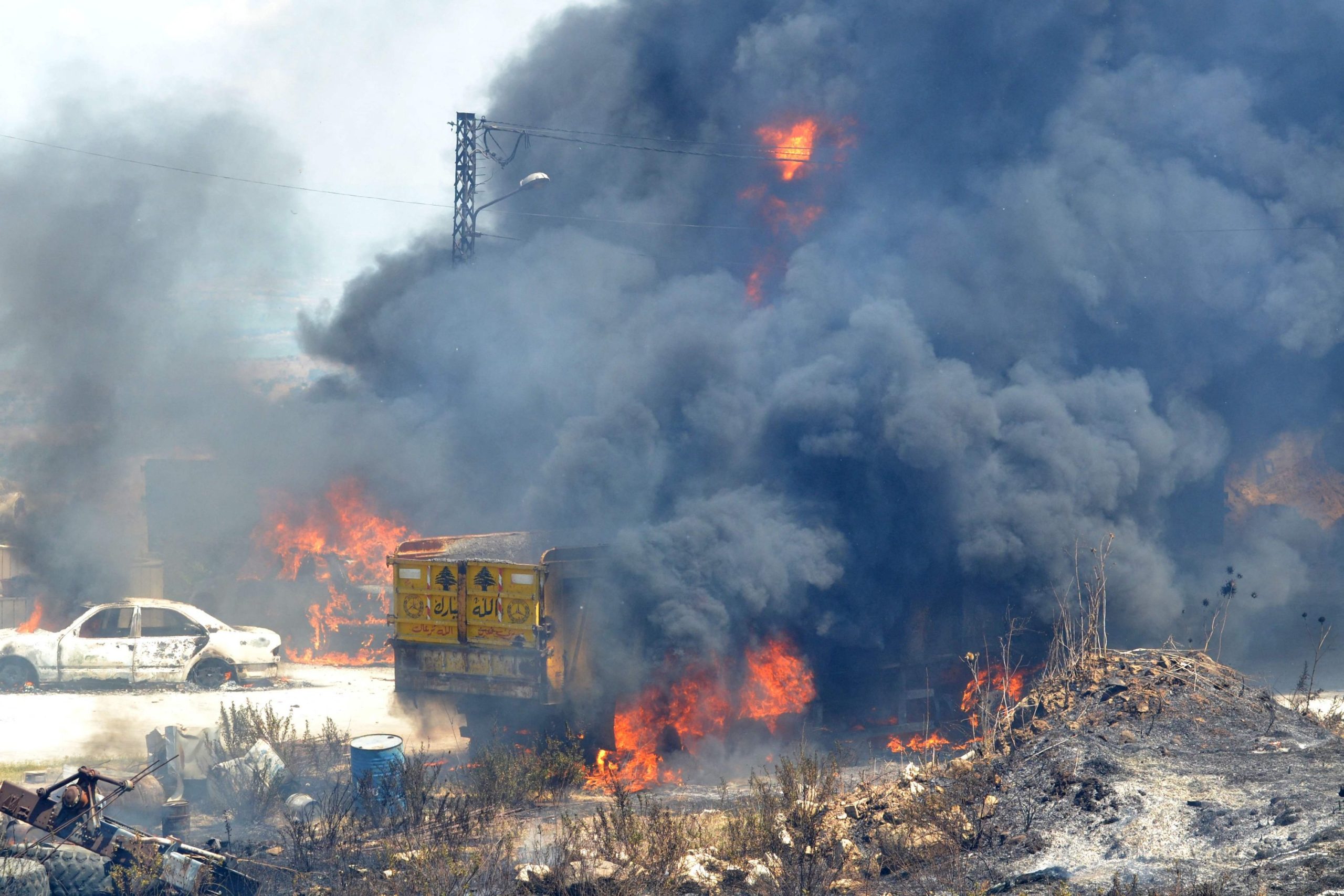 BEIRUT–Lebanese President Michel Aoun has been a magnet for Lebanese anger as the deadly fuel tank blast in Al-Tleil village in the Akkar region was seen as illustrating the inability of his regime to protect the Lebanese and prevent the collapse of the Lebanese state.

Ongoing political feuding has paralysed the country and led to the unravelling of the banking system and the failure to form a cabinet for more than a year since the Beirut port bombing.

The tragedy in the impoverished north overwhelmed medical facilities and heaped new misery on a nation already beset by an economic crisis and severe fuel shortages that have crippled hospitals and caused long power cuts.

The explosion was widely seen as a direct consequence of official negligence that had pushed the country deeper into free fall.

Lebanese politicians and clerics directed harsh criticism at Aoun, calling for his resignation so as to allow others to save Lebanon. Former Prime Minister Saad Hariri told Aoun, “You will not soon find an embassy to shelter you,” referring to his fleeing to the French embassy in his pajamas to seek asylum in 1989 after he was defeated by the Syrian army.

At least 28 people were killed and dozens injured when a fuel tank exploded in Akkar. The army had seized the tank on property belonging to a well-known fuel smuggler, after the tank was discovered by youths in the area.

The Lebanese army announced the death of two of its members and the injury of 18 others, 11 of whom are in “critical conditions”, while four are still missing.

Addressing Aoun, Hariri said, “Akkar stirred the pain of all the Lebanese and there were no tools of sedition involved. You see people’s pain as sedition and we see it as a cry in your face. Leave, Mr President, leave.”

He asked, “How does the President of the Republic allow himself to ignore the people’s pain in Akkar to speak at a meeting of the Defence Council and talk about the activities of extremist groups that aim to create a situation of chaos and lawlessness … Akkar is not Kandahar … Akkar has been oppressed by you and your era. The fire has been ignited in its heart before it was ignited in the smuggling tanks.”

Earlier on Sunday, Aoun held  a special meeting of the Supreme Defence Council at Baabda Palace, during which he reviewed “the activities of extremist groups aimed at creating a situation of chaos and lawlessness in the north.”

The confusion of the Aounist movement after the Akkar explosion was in clear evidence, with the president’s son-in-law and head of the “Free Patriotic Movement”, Gibran Bassil, expressing the view that Akkar should be declared a military zone so as to ensure the security and protection of its residents.

“We have warned two weeks ago that Akkar has virtually drifted outside the country, because of the fuel gangs that block roads and stations and hijack fuel tanks,” Bassil tweeted.

Bassil called for cancellation of the decision of the governor of the Banque du Liban, Riad Salameh, which, he said, causes “chaos and sparks strife.”

On Wednesday, the Central Bank had announced that it would stop subsidising fuel imports, which will lead to a fivefold increase in fuel prices in the Lebanese market.

Since Saturday, many Lebanese regions have witnessed security raids on fuel stations and storage tanks whose owners are hoarding quantities of fuel (petrol and diesel) in order to sell them later at high prices or smuggle them to Syria, which has been experiencing a fuel crisis of its own for months now.

The Mufti of Baalbek-Hermel, Sheikh Khaled Al-Solh, said, “This heinous crime jolts thrones and therefore you must resign in order to bring relief to the country and the people if there is still an ounce of humanity or conscience left in anyone.”

He added, “We have confidence today only in the army to curb hoarding and collapse. We call upon it to assume control of the affairs of this country and hopefully alleviate the brunt of the catastrophe.”

Because of a severe economic crisis, Lebanon has been for months witnessing a shortage of fuel, medicines and other basic commodities, due to a shortage of foreign currency reserves at the Central Bank, needed to cover imports.

As a result of the severe economic crisis, which was ranked by the World Bank as being among the worst in the world since 1850, no less than 78 percent of the Lebanese now live below the poverty line, according to United Nations statistics.

The Lebanese hold the ruling class responsible for the economic collapse and the crises that have befallen the country during the past two years. On top of these crises, has been the Beirut Port blast on August 4, 2020, as a result of the combustion of huge quantities of ammonium nitrate stored there for seven years with the knowledge of many political, security and military officials who made no effort to prevent the catastrophe.

Since the resignation of Hassan Diab’s government after the port explosion, differences between the political factions have prevented the formation of a government.

The international community wants such a government to introduce far-reaching reforms in exchange for financial support that would help Lebanon overcome its economic crisis.