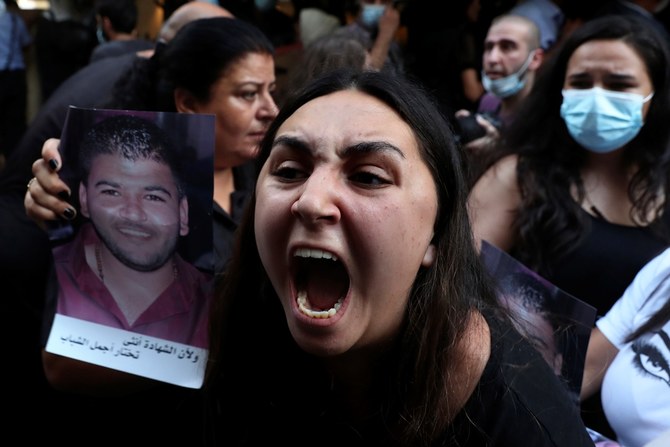 File photo: A woman whose brother was killed during last year’s massive blast at Beirut’s seaport, holds his portrait as she chants slogans during a protest outside caretaker Interior Minister Mohamed Fehmi’s home in Beirut . (AP)
Share:

In August 2020, at the time of the deadly Beirut port explosion, Lebanon was already facing deepening hardship due to the financial crisis caused by decades of state corruption and waste. In the wake of the deadly blast, the country was faced with dual political and economic crises that took a devastating turn over the past year. And now the country is rife with poverty, instability, hopelessness and many Lebanese have been forced to flee. Yet Sara El Yafi, Political Analyst & Activist, is more than determined than ever to stay put and “bridge the action to the truth. We need to get rid of this political mafia,” insists Ms. El Yafi.

Ms. El Yafi points out how some of Lebanon’s top officials were well aware of, and tacitly accepted, the lethal risks posed by ammonium nitrate, as documented in a new Human Rights Watch report. Reuters reported last August that Prime Minister Hassan Diab and President Michel Aoun were both warned in July last year that the chemicals posed a security risk and could destroy the capital if they exploded.

Despite the worsening situation, Ms. El Yafi remains hopeful in the Lebanese people, “which is everything we’re seeing today (through mass protests and demands for justice). For the first time, a people have found their voice again. Because for a long time, we were held hostage by the Mafia and the militia. (But now) we are sounding our voices like never before and that’s going to be translated (into) change.”