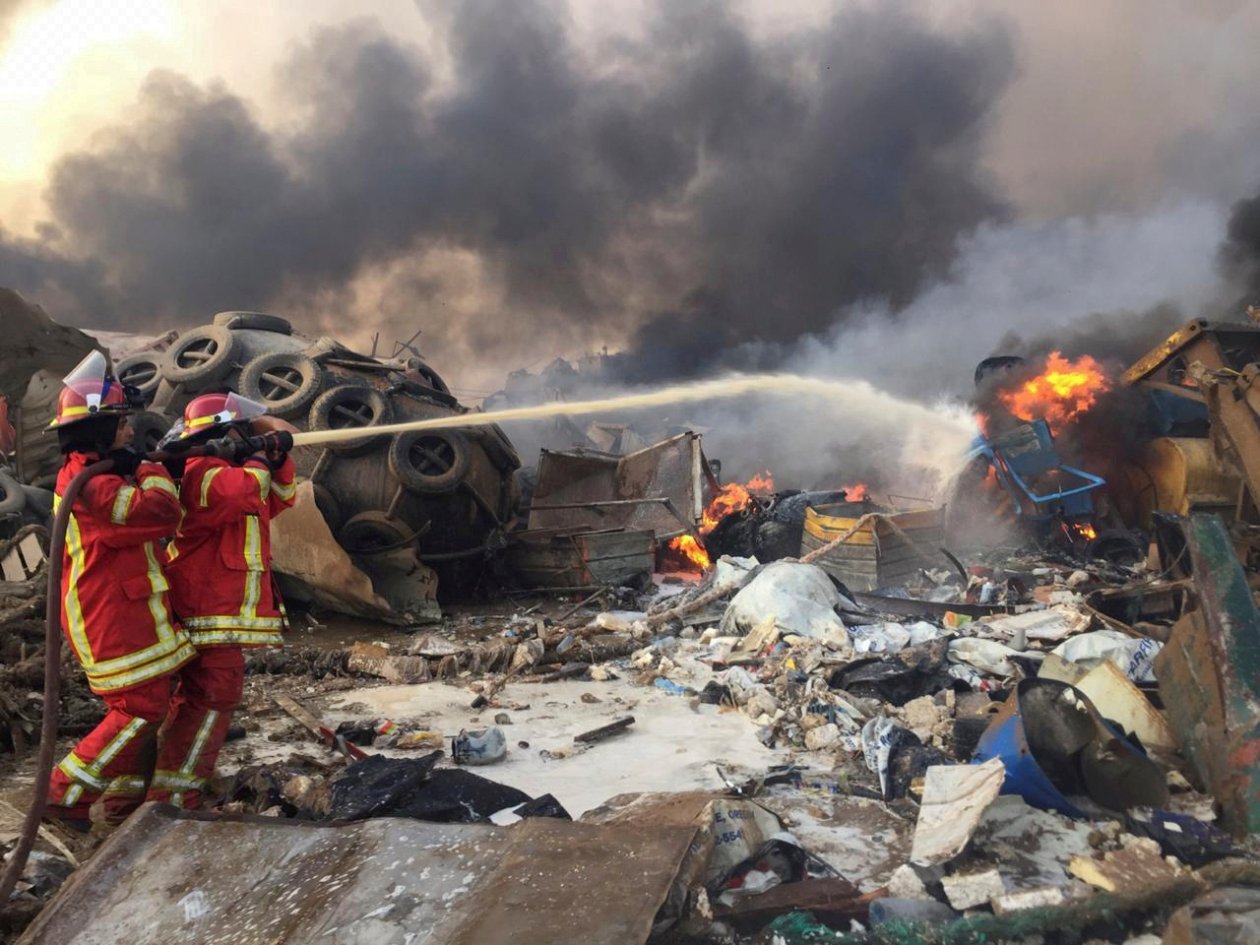 File photo of firefighters trying to extinguish the fire at Beirut Port following the explosion on Aug 4, 2020 in which 218 people were killed ,7000 Injured after several hundred tons of ammonium nitrate exploded . 2750 tons were stored there for nearly 7 years, reportedly for use by the Syrian regime in its barrel bombs. The shipment was reportedly confiscated by a close associate of President Michel Aoun and his son-in-law Gebran Bassil , both are allied with the Syrian regime and Hezbollah . The shipment arrived at a time when Syria was surrendering its chemical weapons to a UN backed organization for destruction . Aoun officially knew about the Ammonium Nitrate 2 weeks before the explosion but did nothing about it . He , along with his Hezbollah allies refused an international investigation but promised a local investigation that will bring the culprits to justice in less than a week but a year later and not one politician has been charged. According to an investigation by FBI only 20 % of the chemical exploded . Several intelligence reports revealed that Hezbollah shipped most of the nitrate to Syria and used the rest in Germany , UK and Cyprus (AP Photo/Hussein Malla, Beirut, Lebanon(Photo by Anwar Amro/AFP)
Share:

Lebanese security forces stood by last night as members of the parliamentary police and unidentified men( who were identified as Speaker Nabih Berri’s supporters ) armed with batons launched a brutal attack against relatives of the Beirut port explosion victims, who were holding an overnight sit-in ahead of a key parliamentary session on the investigation, said Amnesty International.

Witnesses told the organization that members of Lebanon’s Internal Security Forces (ISF) who were present at the site failed to intervene to stop the attack, in which parliamentary police ( which is under the command of Berri) joined men dressed in black who beat and verbally abused the families and journalists. Several people were injured, including two journalists who required hospital treatment.

“The sight of victims’ relatives bloodied and lying on the floor, while journalists were shuttled to hospitals for their injuries after a peaceful sit-in, could not send a clearer message about the extent to which authorities are determined to shamelessly and viciously continue obstructing the course of justice,” said Lynn Maalouf, Deputy Middle East and North Africa Director at Amnesty International.

“This incident speaks volumes about the Lebanese authorities’ disdain for justice. These families lost loved ones as a result of the state’s failure to protect their lives, and it is mind-blowing that they are now facing violent attacks simply for daring to demand accountability as they frontline this historic battle for justice.”

These families lost loved ones as a result of the state’s failure to protect their lives, and it is mind-blowing that they are now facing violent attacks simply for daring to demand accountability as they frontline this historic battle for justice

Victims’ families had been peacefully protesting ahead of a parliamentary session due to take place today. The speaker, Nabih Berri, requested the parliament to discuss a petition calling for the investigation into the blast to be transferred to a special council mandated to prosecute high-level officials. The move is widely seen as yet another attempt to obstruct the ongoing investigation particularly as the council, first announced decades ago has never been formed.

The families had stepped up their calls for mobilization in the run up to the session, leading a number of MPs to announce they would boycott today’s session. Only 39 MPs attended, including the parliamentary blocs of political parties Hezbollah, Amal, Marada, and Syrian Social Nationalist Party, three MPs from the Future party and the indicted MP Nouhad Machnouk, which left parliament without the minimum numbers needed to hold the session.

Hussam Chebaro, a photojournalist for Annahar Newspaper, said the gathering of the families started off so calmly that he was considering leaving early. Suddenly, he heard a loud sound and saw around a dozen people in black t-shirts approaching from behind an ISF checkpoint. Hussam said that some of these men were wearing ISF uniforms.

“They were hitting us with sticks brutally, and hitting everyone indiscriminately: journalists, women, older people, children, the scene was horrible, very brutal. I was hit on my back, neck, head, face, shoulders. They took my camera and my motorcycle, and I was transferred to the hospital. Thank God, I don’t have broken bones, but severe bruising,” Hussam said.

The mother of one of the port blast victims described the men who attacked her as “monsters”. She told Amnesty International:

“Without any reason, out of the blue, around five or six men dressed in black civilian clothes holding black [batons] came our way and started attacking us. They were hitting people recklessly.”

She managed to escape and joined her husband in their car. The attackers followed her to the car, banging on the vehicle with batons as they drove away.

Zakariya Jaber, a freelance journalist, was left with a broken finger after he was beaten by supporters of the speaker.

“It’s becoming routine to hit photojournalists in protests… they want to stop us from documenting their brutality,” he said.

Hussein Baydoun, a photojournalist for Al Araby Al Jadeed, said the attackers had shouted: “how dare you insult Nabih Berri?!” Hussein ran away but was chased by two men, who threw sticks at him. He also witnessed relatives of the blast’s victims being severely beaten. He said that around 12 ISF members present stood by and watched. “They did nothing to protect us or the families,” he said.

This is not the first time the families of the victims of the Beirut port explosion have been beaten. On 13 July, security forces used excessive force to disperse dozens of protesters who had gathered outside the home of the Minister of Interior, who had rejected the investigative judge’s request to question one of Lebanon’s most senior generals over the blast.

A group of MPs from the blocs of the speaker of parliament’s Amal movement as well as Hezbollah and Future had signed a petition requesting the launch of parallel proceedings.

“As authorities continue to hinder the investigation domestically, it is more urgent than ever for the members of the UN Human Rights Council in their upcoming September session to set up a fact-finding mechanism into the blast,” said Lynn Maalouf.

On 4 August 2020, one of the largest non-nuclear explosions in history destroyed Beirut’s port and damaged more than half the city. The explosion killed at least 217 people and wounded 7,000, of whom 150 acquired a physical disability. The blast also damaged 77,000 apartments, forcibly displacing over 300,000 people. At least three children between the ages of two and 15 lost their lives.