Anger in Lebanon over lifting fuel subsidies, a decision that will lead to higher prices 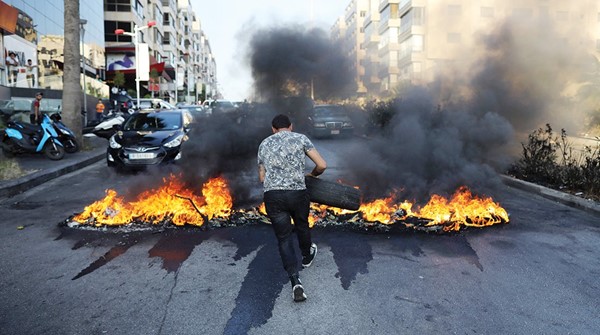 Angry protesters closed roads in different parts of Lebanon on Thursday over the central bank’s decision to end subsidies for fuel products. The decision was likely to lead to a hike in prices of almost all commodities amid a paralyzing economic crisis.Aug 13, 2021
Share:

Protesters closed roads in different parts of Lebanon on Thursday, angry over the central bank’s decision to end subsidies for fuel products. The decision was likely to lead to a hike in prices of almost all commodities amid a paralyzing economic crisis.

Outgoing Prime Minister Hassan Diab described the decision by the central bank’s governor as “irresponsible” and illegal. His government later pledged to keep the subsidies.

Many petrol stations were closed Thursday, with some experts predicting fuel prices would increase fivefold.

Several major roads were closed by angry protesters. In the southern village of Zahrani, a motorist trying to plow through protesters, drove over one person and seriously injured him, the state news agency reported.

The move to end subsidies had been anticipated for months as the bank’s reserves dry up, but on Thursday politicians distanced themselves, and criticized the central bank’s governor, Riad Salameh.

Diab, whose government has rarely held meetings since its resignation a year ago, was quoted as saying that he was taken by surprise by Salameh’s decision. His Cabinet, which acts in caretaker capacity, said it will not adopt new prices necessary to translate the central bank’s decision into policy until a full program for lifting subsidies, including ration cards, is approved. This signaled a standoff that is likely to deepen the fuel crisis.

The central bank’s decision, announced late Wednesday, came hours after a meeting attended by the president, and senior government and security officials in which they were reportedly told by the central bank governor that he can no longer maintain subsidies of fuel imports. Diab did not attend that meeting, saying he was in isolation because he had earlier met a person who tested positive for coronavirus.

It remained unclear how the caretaker government would continue the subsidies if the central bank does not open credit lines for new fuel supplies. Diab’s government said gas stations will have to continue selling gasoline and diesel in the coming days at subsidized prices. It also lashed out at the central bank and the governor, saying that they “will be responsible for the catastrophic consequences of their unilateral decision.”

The central bank on Thursday reiterated its decision, saying subsidies over the past weeks have only helped businessmen, not people in need. Despite subsidies worth $800 million in July alone, fuel products remained scarce in the market, it added.

The shortages are blamed on smuggling, hoarding and the cash-strapped government’s inability to secure deliveries of imported fuel.

In June, the parliament approved giving half a million poor families an amount in dollars for a period of one year. It is not yet clear how the estimated $556 million project, which aims to replace the subsidy system, would be financed. Diab’s office pledged the mechanism was being worked out and would be implemented soon.

The central bank’s move may ease some of the shortages but it is likely to heighten tensions in the small Mideast country where over half the population has fallen below the poverty line. The financial crisis — rooted in years of corruption and mismanagement — took hold in 2019.

It has been made worse by the failure of political leaders to agree on a new government to chart a path out of the crisis and negotiate a recovery package with the International Monetary Fund. Diab’s caretaker government has remained in charge.

The fuel crisis has turned violent before, with motorists clashing at gas stations after long waits and fuel running out. On Monday, gunshots and violence at gas stations killed at least three people.