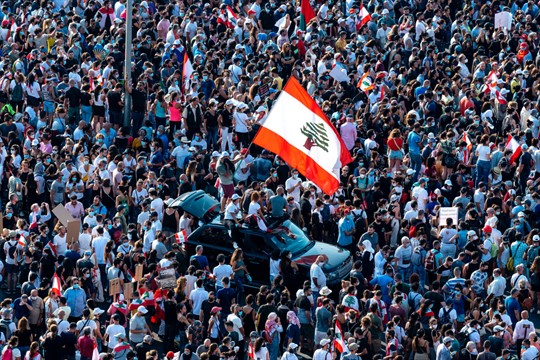 Families of the victims of the Beirut Port blast demonstrating near the explosion site, in Beirut, exactly one year after famous explosion that killed more than 200 people and wounded thousands, Aug. 4, 2021 (AP photo by Ammar Abd Rabbo).
Share:

On Aug. 4, Lebanon observed a somber one-year anniversary of the massive explosion at the Beirut Port that according to Human Rights Watch killed 218 and wounded 7,000. To mark the occasion, people bravely shared moving stories on social media about the toll the event took on their mental health, their families and their ability to survive in a country already beset by many economic woes.

Tragically, what they could not do is point to any meaningful consequences for the politicians and bureaucrats criminally responsible for the entirely avoidable disaster at the port, which was caused by years of corruption, negligence, greed and, most of all, the impunity enjoyed by Lebanon’s ruling elites.

No matter what harm they inflict on the people of Lebanon, the country’s ruling cabal has long benefitted from a golden “get out of jail free” card. Indeed, the Beirut port explosion is a terrifying case study in “authoritarian resilience.”

Though famously divided when it comes to governing the country, Lebanon’s political bosses have locked arms against any accountability whatsoever for themselves and any representatives of their rotten ruling order. No one in the port’s notoriously corrupt administration, not even the most low-level clerk, has been made to answer for unsafely storing 2,750 tons of ammonium nitrate for six years, ultimately producing what might be the world’s largest-ever non-nuclear explosion right in the middle of Lebanon’s dense capital city.

Under their mafia compact, accountability for any must be prevented at all costs, otherwise it could spell accountability for all. And that could potentially signal the dissolution of a system that has allowed a handful of ruling families to enrich themselves while the majority of Lebanon’s population sinks into penury. No accountability also ensures that the lowliest peon in the ruling cabal escapes accountability, since every apparatchik owes his or her job to one of the powerful bosses.

The port explosion is merely the deadliest example of multiple criminally negligent acts visited upon the Lebanese people by their rulers. The country’s preexisting economic and governance challenges—including the lack of a prime minister and Cabinet with full powers since Aug. 10, 2020—were exacerbated and accelerated in 2019, when its currency and economy collapsed.

The collapse was a consequence of a Ponzi scheme administered by the Lebanese Central Bank with full knowledge of the domestic ruling class—and of Western donor governments, including the United States and several in Europe, who gambled, without much evidence, that Lebanon’s economy could indefinitely defy the basic rules of financial gravity. The Central Bank oversaw a dollar peg that artificially stabilized the Lebanese lira at a rate far higher than its actual value. Lebanese banks attracted deposits with artificially high interest rates. When finally tested, the whole system collapsed. Banks froze deposits, most of which were not guaranteed; the market value of the lira plummeted; and the Central Bank quickly ran out of reserves, making it nearly impossible for Lebanon to import staples.

Sadly for the Lebanese, an insolvent country can only enjoy the basics of life for so long. Now the cost of medicine, gas and imported food having become painfully out of reach for millions of Lebanese citizens

Today, a smattering of activists and relatively powerless civil society groups are the only forces calling for accountability for the events of Aug. 4, 2020—and trying to document them. Last fall, Mada Masr and Forensic Architecture produced a hair-raising recreation of what happened that day, including a reconstruction of the port explosion based on a detailed examination of open source information including videos, photographs and documents.

This month, Human Rights Watch published a damning report entitled “They Killed Us from the Inside,” which identifies some of the officials responsible for the deadly, negligent storage of explosive material in the port for nearly six years.

Just as Lebanon’s ruling class has escaped even the most basic form of accountability—naming and shaming—for the port explosion, the political parties and operatives who have assassinated scores of politicians and other notables have escaped even the barest documentation of their violence, let alone justice in the form of a courtroom trial or prison sentence.

The coalition of crooks representing every sect and political faction in Lebanon that has stripped the country bare of its resources has similarly escaped even minimal dishonor.

There is one last hope for accountability, however. Lebanon now depends on international aid to survive, including several billions from the IMF and hundreds of millions in pledged bilateral aid, although most of the pledged aid from Western countries hasn’t tended to come through in recent years. The only viable way to change the rules for Lebanon’s renegade ruling class is to tie whatever aid is eventually disbursed to accountability.

At a minimum, donors could bookend relief with a public accounting of the crimes and negligence of the governing elites tasked with administering those funds. Donors probably can’t force a change in behavior, but they could help lift the penumbra of impunity by naming the officials responsible for a number of charges relating to the port explosion and the currency collapse whenever they release aid to Lebanon.

There are no easy answers to the question of how to dislodge such a thoroughly entrenched and unresponsive coterie of predatory rulers, all of whom protect one another. But given the heavy dependence of Lebanon’s political mafia bosses on Western aid, political patronage and graft, it seems the foreign governments that bankroll and countenance their malfeasance could at least make their Lebanese accomplices uncomfortable by exposing them and their crimes.