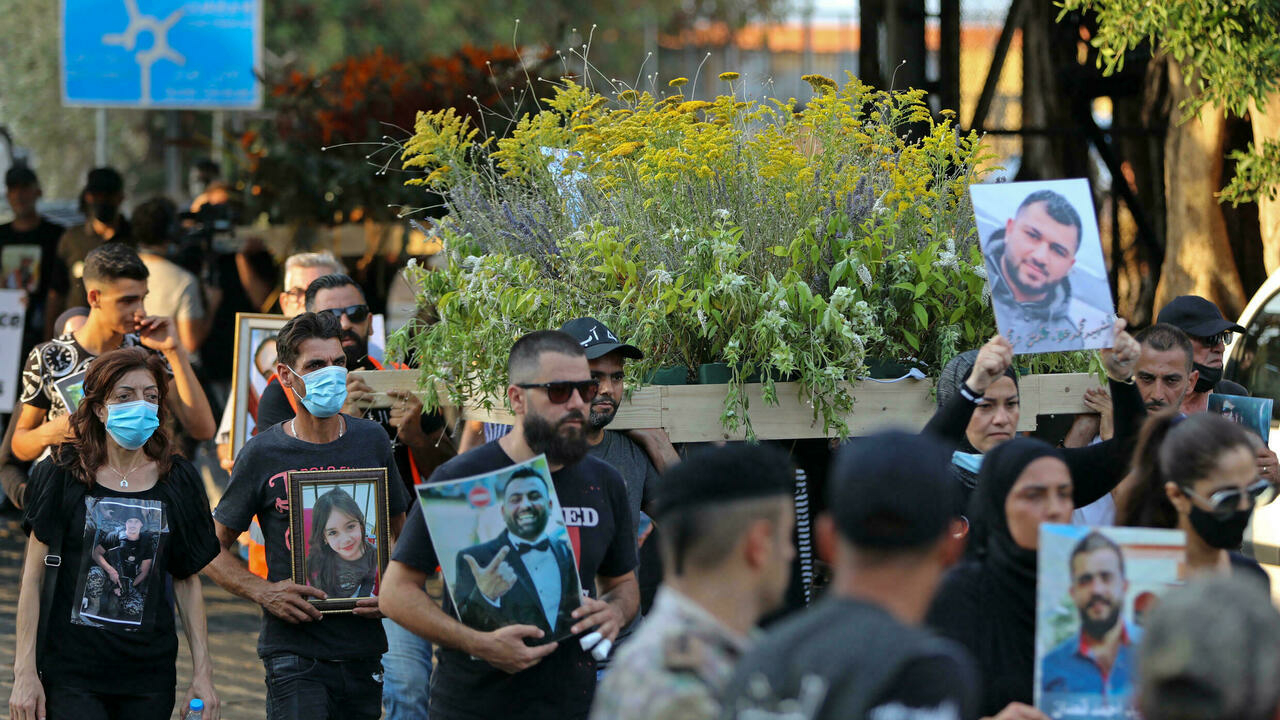 Lebanese protestors carried imitation coffins in a symbolic funeral procession from Beirut port Sunday to demand justice, days after the first anniversary of a vast dockside explosion that killed more than 200 people.

Families of the victims were joined by dozens of supporters, some wearing black and carrying burning torches, at an entrance to the port where a warehouse fire on August 4 last year ignited a vast stash of ammonium nitrate, causing one of the biggest peacetime blasts in history.

Wives, sisters and mothers of those killed held portraits of their loved ones and marched ahead of three symbolic coffins covered in flowers, an AFP reporter said.

Accompanied by drumming from a marching band, the demonstrators marched through the nearby districts of Gemmayzeh and Mar Mikhail, which were heavily damaged by the blast.

“These coffins are symbols to remind people that we carried the coffins of our martyrs,” said Ibrahim Hteit, spokesman for a bereaved families’ association.

“We deserve the truth and we deserve justice for our loved ones. We’re not going to give up,” he said.

On Wednesday, thousands of people demonstrated in Beirut to mark the anniversary of the blast, voicing outrage that nobody has been held responsible for the disaster which left 214 people dead.

The ammonium nitrate, a highly explosive fertiliser, had been stored for years at the port with no safety precautions, according to the government itself.

The explosion wounded 6,500 people and caused billions of dollars-worth of damage.

Yet a judicial enquiry into the disaster has made little progress.

Former ministers are suspected of complicity in the negligence which culminated in the explosion.

Lebanon’s deeply unpopular ruling class have been accused of making every effort to torpedo the investigation and avoid prosecutions.

“The crime goes on, lift immunity!” read one placard at Sunday’s rally.

Helene Ata, a psychologist who lost her twin brother Abdo, 38, called on Lebanese citizens to hit the streets every day until justice is served.

“The pain gets worse every day, under the shadow of injustice around this affair, officials’ inaction, their avoiding justice,” she said.

“A year later, it’s as if nothing happened,” she said.