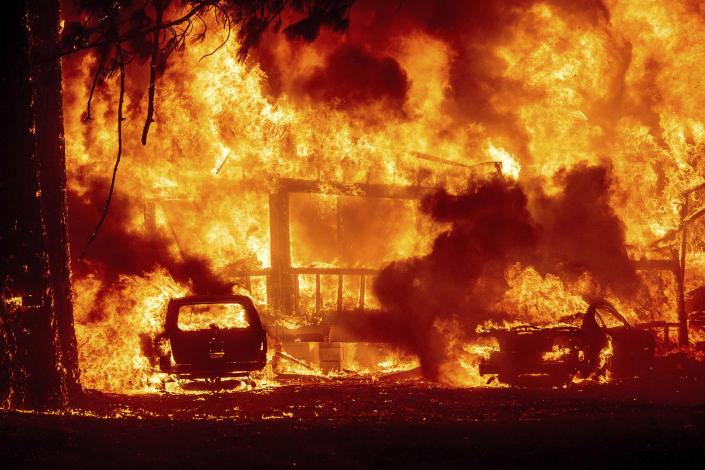 Nichoel Farris had been living on an apple farm in Greenville, Calif., for four years with her husband, Paul. The farm, located in the High Sierra of Northern California, about 150 miles north of Sacramento, was where they grew sunflowers, raised chicks, rode horses and grew apples. Now all that’s left is a pile of ash and blackened tree trunks.

The Dixie Fire, driven by strong winds, tore through the Gold Rush-era town of Greenville overnight on Wednesday, destroying 75 percent of the town, according to federal fire officials.

“Our Hideaway homestead in Greenville is completely gone from #Dixiefire. House, car, farm, contents, garden, bees, animals, cat…everything we so deeply loved. Our entire town burned. I’ve never felt such a mourning for our normal life,” Nichoel wrote on Facebook.

Dixie is the largest fire in California this year and the third-largest on recordin the state’s history. By Thursday evening, the three-week-old fire grew to 361,812 acres, expanding 25 percent since reaching Greenville on Wednesday. As of Friday, the fire has burned through 432,813 acres, increasing another 20 percent overnight, and becoming the largest active blaze in the U.S.

“If you are still in the Greenville area, you are in imminent danger and you MUST leave now!! Evacuate to the south to Quincy. If you remain, emergency responders may not be able to assist you,” the Plumas County Sheriff’s Office posted on Facebook on Wednesday.

Following a red-flag warning, indicating that there is an increased risk of fire danger, the Farris’s evacuated, just hours after returning from their previous evacuation. That order had been lifted but quickly reinstated as the fire grew increasingly out of control.

“We got out in our truck with our 3 dogs and [a] few suitcases. And everything else is ash,” Nichoel wrote on Facebook. “Birthday cards in my mother’s handwriting, Christmas ornaments Trey made as [a] kid, the earrings I wore on my wedding day. The stuff you touch and feel the warm love of good memories.”

Greenville, the largest town in Indian Valley, an area composed of four small towns, is rich with history. The Indian Valley Chamber of Commerce website has a self-guided Greenville walking tour, and shows the various 19th and early 20th century buildings that once lined the main street, including an old saloon and stables.

The one thousand residents created a tight-knit community where Nichoel recalls talking to her neighbors over her fence. Eva Gorman, owner of a Greenville shop called Josefina Fine Knits, said that the town was a place of mutual and strong character, where neighbors volunteered to move furniture, colorful baskets of flowers brightened Main Street, and writers and musicians mingled with mechanics and chicken farmers.

The fire flattened the area in less than half an hour. “It was just like a huge tornado went through the town. It burnt that town down in about 25 minutes,” Greenville resident Jerry Thrall told People magazine.

“That’s my whole childhood,” Ryan Schramel, who grew up in the town and currently lives in Taylorsville, a nearby Indian Valley town, said to the New York Times. “It was tragic to just watch the whole thing go up.”

The Dixie Fire is one of 107 large fires currently burning in the U.S., according to the National Interagency Fire Center. Twelve of these are located in California, where residents have faced months of drought, heat waves, and are now on the way to seeing the worst fire season in the state’s history.

The Dixie Fire started in the same area as the 2018 Camp Fire, the deadliest wildfire in the U.S. in this century, killing 85 people and destroying 11,000 homes.

Scientists say that climate change, which has led to higher temperatures and drier conditions, will only make wildfires more extreme and more frequent.

Now the Farris’s are scrambling to find a new place to live. On Facebook, Nichoel asked her friends, family and community for help. “We lost everything in this horrific fire and need a place by next week. … We are shattered and lost.”

As the Dixie Fire continues to ravage hundreds of thousands of acres in Northern California, a federal judge has now ordered Pacific Gas & Electric to explain the utility company’s role in starting what has become the largest wildfire burning in the United States.

The cause of the blaze remains under investigation, but U.S. District Judge William Alsup asked PG&E in an order issued late Friday to give information regarding the tree that fell on the utility company’s power line at the origin of the Dixie Fire. PG&E has said its equipment may have been responsible for starting both the Dixie Fire and the much smaller Fly Fire, which later merged with the Dixie Fire.

Alsup — who oversees PG&E’s criminal probation for felony convictions stemming from the deadly 2010 San Bruno gas pipeline explosion — also required that PG&E give details about the equipment and vegetation in the area where the fires started. The San Francisco judge said the company would have until Aug. 16 to respond.