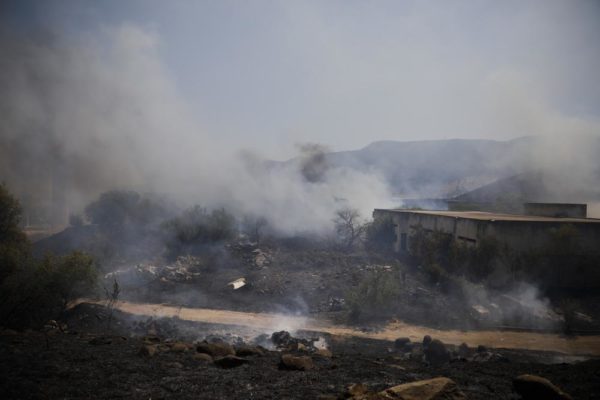 Fields burn following a hit by a rocket fired from Lebanon into Israeli territory, near the northern Israeli town of Kiryat Shmona, Wednesday, Aug. 4, 2021. Three rockets were fired from Lebanon into Israeli territory Wednesday and the army responded with sustained artillery fire, Israel’s military said. There was no immediate information on damages or casualties. (AP Photo/Ariel Schalit)
Share:

Israel on Thursday escalated its response to rocket attacks this week by launching rare airstrikes on Lebanon, the army and Lebanese officials said.

The Israeli army said in a statement that jets struck the launch sites from which rockets had been fired over the previous day, as well as an additional target used to attack Israel in the past. The IDF blamed the state of Lebanon for the shelling and warned “against further attempts to harm Israeli civilians and Israel’s sovereignty.”

The overnight airstrikes in southern Lebanon were a marked escalation at a politically sensitive time. Israel’s new eight-party governing coalition is trying to keep peace under a fragile cease fire that ended an 11-day war with Hamas’ militant rulers in Gaza in May. Several incidents leading up to this week’s rocket fire from Lebanon have focused attention on Israel’s northern border, and the United States swiftly condemned the attacks on Israel.

The strikes also come as Lebanon is mired in multiple crises, including a devastating economic and financial crisis and political deadlock that has left the country without a functional government for a full year.

Lebanese President Michel Aoun said Israel’s use of its air force to target Lebanese villages “is the first of its kind since 2006 and indicated the presence of aggressive, escalatory intentions” against Lebanon. In a statement, he said Lebanon would submit a complaint to the United Nations.

Israel and the Lebanese militant group Hezbollah fought a devastating, monthlong war in 2006 which killed some 1,200 Lebanese, mostly civilians, and around 160 Israelis, mostly soldiers. The war failed to neutralize the group’s rocket threat, and Israeli officials say Hezbollah’s improved missile arsenal is now capable of striking virtually anywhere in the country.

No one has claimed responsibility for the rocket fire from Lebanon, and Hezbollah has not commented. The Hezbollah-owned Al-Manar TV reported the Israeli strikes at around 2 a.m. Thursday, saying they hit an empty area in the Mahmoudiya Village in Marjayoun district.

Avichai Adraee, the Israeli army’s Arabic-language spokesman, said the Lebanese government is responsible for what happens on its territories and warned against more attacks on Israel from south Lebanon.

Channel 12 reported that one rocket exploded in an open area and another was intercepted by Israel’s defense system, known as the Iron Dome. Israeli media reported that the incoming rockets started fires near Kiryat Shmona, a community of about 20,000 people near the Lebanese border.

The Lebanese military reported 92 artillery shells fired by Israel on Lebanese villages as a result of the rocket fire from Lebanon. It said the Israeli artillery shelling resulted in a fire in the village of Rashaya al-Fukhar. In a statement, the Lebanese army also said it was conducting patrols in the border region and had set up a number of checkpoints and opened an investigation to determine the source of the rocket fire.

There have been several similar incidents in recent months.

“Israel has the right to defend itself against such attacks,” he told reporters in Washington, adding that the U.S. would remain engaged with partners “in the region in an effort to de-escalate the situation.”

At the United Nations, spokesman Stephane Dujarric said the U.N. peacekeeping mission in Lebanon, known as UNIFIL, was aware of the rocket fire and Israel’s artillery response. He said the UNIFIL commander, Maj. Gen. Stefano Del Col, appealed for a cease-fire and urged both sides to “exercise maximum restraint to avoid further escalation.”

Lebanese media reported that a huge fire erupted in the southern town of Nabatiyah on Thursday and many trucks were set on fire. The Lebanese civil defense is shown in this tweet trying to extinguish the fire

He said in a statement that the Israeli enemy has waged an explicit aggression against the Lebanese sovereignty “with artillery first then with warplanes.”

Diab who is aligned with the Iranian backed Hezbollah militant group stressed that this “dangerous aggression is a major threat to peace at Lebanon’s southern border” and that “Israel has previously committed a series of violations against Lebanon” and “has used the Lebanese airspace to attack Syria.”

He called on the United Nations and the Security Council to “deter Israel from repeating violations against Lebanon,” and from “threatening the stability that has existed since 2006.”

Similarly President Michel Aoun said Thursday that “submitting a complaint to the United nations is a must,” after being briefed by the Army Commander Joseph Aoun about the results of the investigations regarding the rockets fired from Lebanon.

He declared that “it’s the first time since 200 6 that Israel targets Lebanese villages with its air force, which reveals Israel’s intentions to escalate its aggressions.”

Aoun, who like Diab is allied with Hezbollah said that the latest attacks happened after “continuous threats against Lebanon and its sovereignty.”

He stressed that the Israeli attacks are “a flagrant and dangerous violation against the Security Council Resolution 1701, and a direct threat to security and stability in the south.”