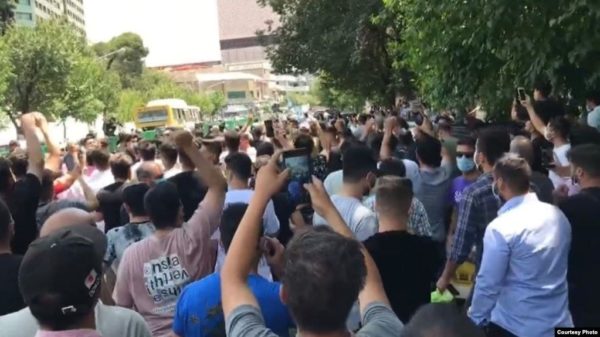 Demonstrators Chant ‘Death To The Dictator’ In Tehran As Protests Spread throughout the country over water shortage
Share:

PARIS, FRANCE,  – The National Council of Resistance of Iran (NCRI), and the People’s Mujahedin of Iran (PMOI/MEK), reported that the people living in different cities of Khuzestan  continued to demonstrate against shortages of water.

On Tuesday, July 20, thousands of Izeh residents protested against lack of water, chanting, “Death to  the dictator, death to  Khamenei.” The State Security Force (SSF) arrested a number of the protesters, which further enraged the citizens.

Protesters chanted “Arabs and Bakhtiari’s, unite, unite” (referring to the two main ethnicities of Arabs and Bakhtiaries in the region), and “Tanks and guns are no longer effective,” and Khamenei, must be killed.” The SSF and special units fired tear gas, pepper spray, and live ammunition at demonstrators in a bid to disperse them. But the youth responded by throwing rocks while chanting, “Have no fear, we are all together.” Several youths were killed or wounded when the SSF opened fire.

Different regions of Ahvaz were the scene of hit-and-run between the young people and the repressive forces. In Susangerd, the young people were chanting in Arabic, “We know you will confront us with bullets and guns. But dying and becoming martyrs in the path to freedom is our dream.” In Behbahan, young people blocked both sides of Maroun Bridge.

In another development, in Tehran and Karaj (west of the capital)  , a large group of people, led by courageous women and girls in Tehran’s Sadeqiyeh underground station, chanted “death to the dictator,” and “down with the principle of the velayat-e faqih (absolute clerical rule)” to express their rage and revulsion toward the regime.

As a routine, the clerical regime cut off the internet in Izeh, Ahvaz, Shushtar, Susangerd, and Mahshahr to prevent the spread of the protests and censor the news. Reports indicate that dozens of young people in Ramshir and surrounding villages have been arrested.

Mrs. Maryam Rajavi, the President-elect of the National Council of Resistance of Iran (NCRI), hailed the young people in Izeh, who are confronting the IRGC on the sixth night of the uprising in Khuzestan Province. She also hailed the people of Tehran, who chanted death to the principle of the velayat-e faqih. The people are rising to support Khuzestan nationwide, Mrs. Rajavi added.

“The crisis-ridden image of Khuzestan may be the most obvious image of the reality of dissatisfaction in society. The trace of this dissatisfaction leads to crises such as housing, work, etc., in other parts of the country,” wrote the state-run Vatan-e Emrooz on Tuesday.

Protests in Khuzestan started due to the water crisis and the regime’s mismanagement.

Vatan-e Emrooz acknowledged that “research shows that despite any natural incident in this province, the main reason of the recent water crisis is mismanagement.”

“The water scarcity in Khuzestan is a clear example of mismanagement. Not only has the regime failed to take advantage of the huge volume of rivers in this province, which is unique in the country, but also by irrationally constructing dams such as the Sivand dam, and irregular transfer of water from Khuzestan to other provinces – which did not solve the water problem of those provinces and the water problem of Khuzestan – has created a huge amount of dissatisfaction,” wrote the state-run Etemad daily on Tuesday.

The Revolutionary Guards (IRGC), which dominates Iran’s economy, is behind building unscientific dams for military purposes and transferring Iran’s water to neighboring countries to profit more and fund its illicit activities.

There have been dozens of warnings by experts and state media about the consequences of the water crisis in Iran, but regime officials have always ignored people and their demands.

“Khuzestan is a perfect model of how ignoring people would end. Ignoring people might seem easy at first, but soon, it will be a bitter experience,” wrote the state-run Etemad daily.

“What has happened in Khuzestan and caused widespread protests is the result of mismanagement, and officials cannot ignore the legitimate demands of the protesting people,” Etemad daily continues.

As the water crisis deepens in Iran, rival factions blame one another to avoid people’s outrage.

“The inefficiency of the management, the anti-oppressed thinking of Hassan Rouhani government has led to intensified public dissatisfaction. MPs from Khuzestan expressed concern about the nature of mismanagement in the province’s water shortage. We can smell another sedition,” wrote the state-run Vatan-e Emrooz daily, blaming Rouhani’s government and calling people’s uprising a “sedition.”

“The most important question is that how come the poor and marginalized people became the main force of protests and street riots during Rouhani’s government, after the incidents in the 1990s,” Vatan-e Emrooz asked.

“The resuscitation of street protests by the poor people in the past eight years, mainly the last two years, indicates a radical reaction by people frustrated with the current situation. These people are the main victims of the government’s policies. One could see the trace of this frustration in all these protests, whether they started due to the fuel price hike or water and electricity [shortages],” Vatan-e Emrooz acknowledged society’s restiveness.

“It is not possible to ignore the escalation of the water shortage crisis and its transformation from a temporary crisis to a vital crisis.

The protests in Khuzestan showed that the people do not want this regime in its entirety, and the public hatred is not limited to some provinces.

“Every day, somewhere in Iran, another issue bothers officials, and protests begin. Several cases are being protested, and such an atmosphere has become one of the biggest challenges in recent times,” wrote the state-run Arman daily in this regard.

Arman then warns about the regime’s oppressive measures during the recent protests in Khuzestan and in general.

“If authorities resort to the short-term oppressive solution to address protests in Khuzestan, rather than resolving people’s many problems, these bitter events [protests] will be repeated again and again,” Arman daily warned officials.