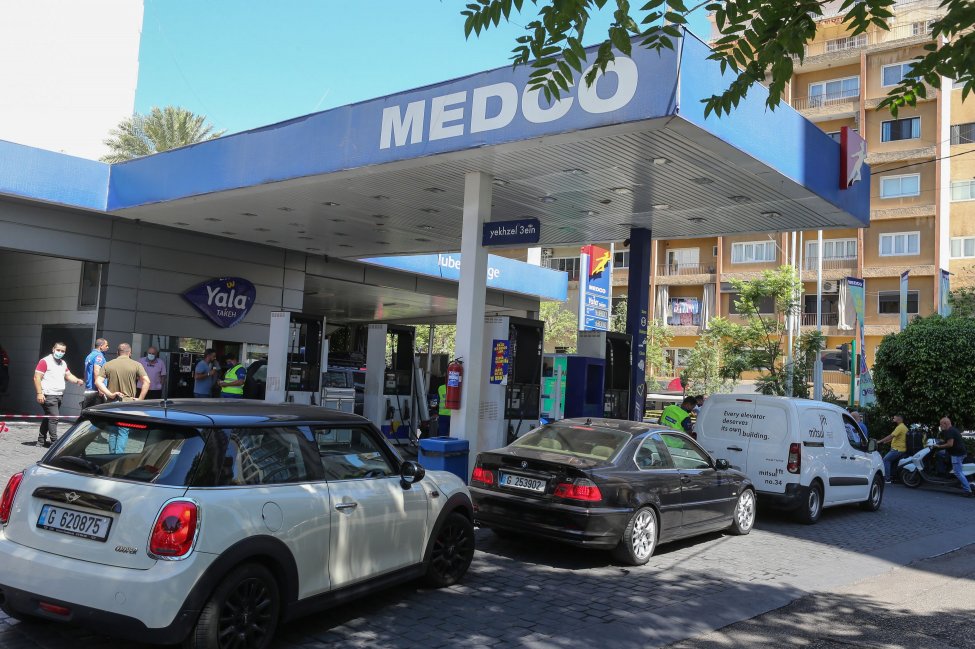 Motorists line up at a gas station to get fuel in Beirut, Lebanon, on June 15. The wait can still be several hours. File Photo by Nabil Mounzer/EPA-EFE
Share:

BEIRUT, Lebanon — A “typical” day in Lebanon now starts with finding an open gas station, hunting for medications or baby milk, struggling with power cuts and private generator rationing, shopping for the least expensive items, praying against getting sick — or simply to survive the day.

Severe fuel shortages that started with the government’s decision last month to reduce subsidies on fuel and other essential items accentuated the country’s economic crisis and deepened the suffering of an exhausted population.

No fuel means no electricity, no transportation, no running refrigerator or elevators, no Internet, no traffic lights or street lighting, no air conditioning to ease the humid and hot summer heat and, most frightening, no hospital to maintain life-saving procedures.

Much of the subsidized fuel and gasoline have been smuggled to neighboring Syria, which is also suffering fuel shortages, or are being sold in the black market at double or triple its price, which few can afford.

Long queues of cars waiting for hours at an open gas station have become an almost daily sight in Beirut and other Lebanese regions. Angry and frustrated motorists end up fighting and, in some cases, firing gunshots. At least one person has died that way.

To save on gasoline, some people replaced their cars with motorcycles, while many started to restrict their movements and avoid long drives. Going to work every day has become a challenge, while heading to the mountains to flee Beirut’s unbearable heat has become a luxury. With the increased gasoline price, taking a cab or using available public transportation, including shared taxis (known as “service”) or small vans has become beyond the means of many.

“Priority goes to buying essentials at the supermarket or groceries, touring pharmacies with the hope of finding needed medicines or going to the doctor or hospitals for medical care,” said a civil servant who spoke to UPI on the condition of anonymity.

However, the most exhausting part for most people is the increased power blackouts. The state electricity company, Electricite du Liban, is barely able to provide more than 3 hours of power a day, while huge costly diesel generators operating in the neighborhoods by private suppliers have either started severe rationing or shut down due to lack of diesel fuel.

Even a deal signed last week to buy 1 million tons of heavy fuel oil from Iraq in Lebanese pounds and resell it to companies to secure fuel that Lebanon can use in its own power plants will not solve the acute power problem. The one-year estimated $300 million to $400 million agreement was expected to only alleviate the power cuts.

“Last night, we ran out of diesel fuel, although we have been begging the fuel company that usually serves us to send any quantity to keep some light on,” Leila Kassem, a 58-year-old employee and mother of two who lives in a residential building in Beirut’s posh area of Koraytem , told UPI. “It wasn’t just us…Lights were shutting down in the whole neighborhood one by one.”

Kassem decided to move to the mountain, east of Beirut, where she has an apartment in a residential complex that still provides electricity around the clock and offers — like still in some parts of Lebanon — a kind of a “normal” life, with restaurants, beaches and nightclubs attracting mostly Lebanese immigrants visiting their families.

“I am lucky and privileged because we have a house in the mountain, but my Beirut neighbors, who include sick old men and women, are stuck,” she said. “It is worse than the [civil] war.”

At least during the 1975-90 war, medicines and food were available, and most importantly, at affordable prices.

Today, one can only see nearly empty shelves in the pharmacies because of medicine shortages.

Drug importers have stopped supplying the pharmacies with hundreds of drugs after the central bank failed to release millions of dollars in accumulated dues to suppliers abroad under a subsidy scheme. Their stocks of basic medicines for chronic diseases are exhausted.

“We are stuck in the middle, between the medicine importers and the Health Ministry, which wants them to price the drugs at 12,000 Lebanese pounds for $1 while it reached 23,000 LL,” Houssam Sammak, who owns a pharmacy in Beirut, told UPI. “Ninety percent of the drugs we are still selling are supplements at the current dollar rate that not many can afford.”

Sammak explained that most pharmacies are at risk of closing, for they are barely making any profit.

Hospitals are no better situated, as they are unable to find fuel to power their generators.

“We are spending the day trying to find some diesel fuel for the hospitals,” Suleiman Haroun, president of the Syndicate of Private Hospitals, told UPI. “This is unbearable, and we have never imagined in our worst nightmares that we will reach that point.”

Haroun poured his anger on the political leaders whose inaction and incompetence have pushed the country to the verge of total collapse.

“How anyone who has one gram of brain thinks that hospitals can operate without electricity,” he said. “We have patients on artificial respirators, others need kidney dialysis or heart bypass…It is impossible to continue that way.”

Lebanon has been facing a very deep and compounded crisis since October 2019 that resulted in soaring poverty and unemployment with the Lebanese pound losing 90 percent of its value and most of its sectors collapsing one after the other.

“Many countries go into crises, but in Lebanon, the political impasse and the inability to manage the crisis and take the right decisions has exacerbated the situation,” Nasser Yassin, a professor and head of the Crisis Observatory at the American University of Beirut, told UPI. “What we see at the moment is actually the repercussions of all that on the different sectors — food, water safety and availability, electricity and fuel.”

Yassin, a specialist in social policy who was named to join the Cabinet that Prime Minister-designate Saad Hariri intended to form before President Michel Aoun rejected it two weeks ago, warned that Lebanon moved from crisis management with a recovery plan last year to “a firefighting mood.”

“Every day there is something new: fuel, water, pharmacies and tomorrow the schools in September…We are now reacting to flare-ups,” he said. “I think we are not at the end.. I think we are still diving into the worst situation.”