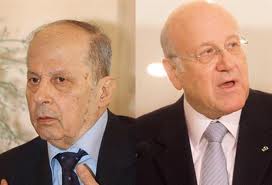 Lebanon’s newly named prime minister-designate Najib Mikati has been meeting president Michel Aoun on almost daily basis with aim of forming the cabinet but as in the case of former PM Saad Hariri , Mikati is facing many obstacles from Aoun which prevented him so far to meet is objective of announcing the cabinet formation by August 4th, the first anniversary of the Beirut. port explosion that killed 211 people, wounded 6500 and left 300, 000 homeless after the explosion destroyed a huge section of Beirut

“The President has vetoed the confessional distribution that (PM-designate Najib) Mikati has suggested for the sovereign portfolios,” the Nidaa al-Watan newspaper reported on Friday

“Aoun specifically did not stomach the idea of allotting the interior and justice portfolios to the Sunni community,” the daily added.

“The President considered that there is a flaw in the sectarian balance of the cabinet line-up in terms of the distribution of portfolios according to type and importance,” Nidaa al-Watan newspaper added

The daily also pointed out that “it will be very difficult to move forward in the formation process unless these obstacle are resolved.”

“That’s why it was agreed to take a 72-hour break to think it over with the hope of finding possible solutions,” the daily added.

One analyst revealed that Aoun has been suffering from Polar disease for decades .

People who have bipolar disorder can have periods in which they feel overly happy and energized and other periods of feeling very sad, hopeless, and sluggish. In between those periods, they usually feel normal. You can think of the highs and the lows as two “poles” of mood, which is why it’s called “bipolar” disorder.

The word “manic” describes the times when someone with bipolar disorder feels overly excited and confident. These feelings can also involve irritability and impulsive or reckless decision-making. About half of people during mania can also have delusions (believing things that aren’t true and that they can’t be talked out of) or hallucinations (seeing or hearing things that aren’t there).