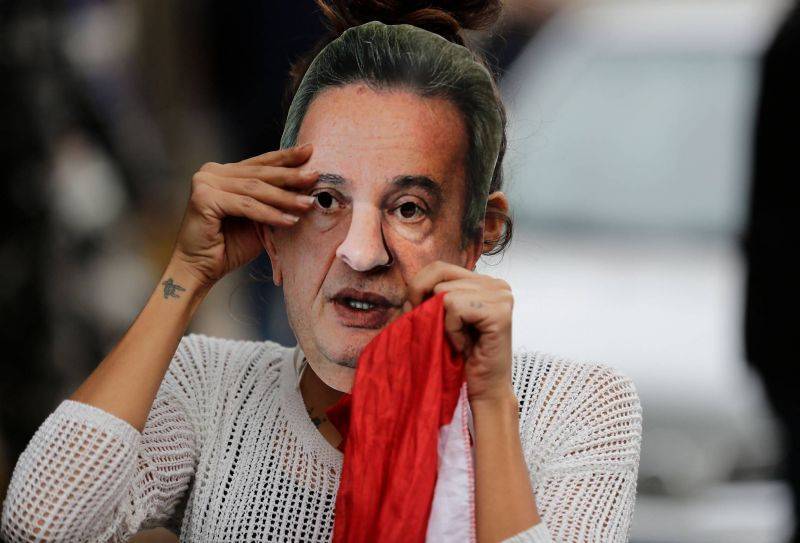 A protester holds a mask bearing the effigy of BDL Gov. Riad Salameh during a sit-in in front of the headquarters of the central bank in Beirut in November 2019. (Credit: Joseph Eid/AFP)
Share:

French anti-corruption judges have taken over the probe into the personal wealth of Lebanon’s central bank chief, prosecutors said, raising the likelihood he may face money-laundering charges.

France opened the probe into Riad Salameh, a former Merrill Lynch banker, in May following a similar move by Switzerland, where he has been under investigation for months.

On July 2, France’s Financial Prosecutor’s Office (PNF) handed over its findings for judicial inquiry into allegations of aggravated money laundering, the office said on Friday.

Salameh, who owns several properties in France, is accused by critics at home of transferring money abroad during a 2019 uprising against the government, when ordinary people were prevented from doing so.

The 71-year-old has also been accused of being responsible for the collapse of the Lebanese pound, which has sent the economy into a tailspin and prompted shortages of basic items such as medicine and fuel.

The French judges can summon Salameh for questioning and collaborate with investigators in other countries, and also confiscate assets.

The inquiry was prompted by complaints filed by Swiss foundation Accountability Now, France’s Sherpa anti-corruption NGO, and the Collective Association of Victims of Fraudulent and Criminal Practices in Lebanon, set up by savers devastated by the post-2019 crisis.

A lawyer for Salameh, Pierre-Olivier Sur, said his client “denies these acts in their entirety,” and called for access to the investigators’ findings.

In media appearances, Salameh has said he legally invested the roughly $23 million (19 million euros) he had when named central bank governor in 1993, obtained from inheritances and his work at Merrill Lynch in Beirut and Paris.