Floods kill more than 125 after record rainfall in western Europe 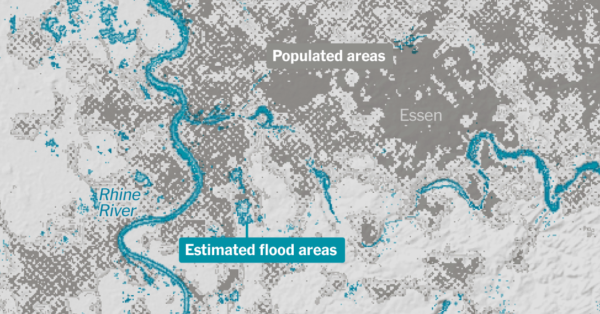 A preliminary analysis of satellite imagery shows wide areas of flooding along rivers in western Germany and neighboring countries. The analysis compared satellite images from July 15 to images acquired during June and July in the past two years to show areas that were inundated that would not normally be at this time of year.
Share:

The death toll from devastating flooding in western Europe climbed to over 100 on Friday, as buildings continued to crumble under the force of raging torrents unleashed by storms that parked over the region for days. As CBS News correspondent Imtiaz Tyab reports, the scale of the disaster is unlike anything the area has seen in living memory.

Entire neighborhoods lay in ruins after days of heavy rains — the worst deluge recorded in the region in more than 200 years. The downpour sparked flash flooding across huge swathes of western Germany and several neighboring nations.

Water spilled over the banks of rivers and turned roadways into torrents so powerful that they crushed much of what stood in their way.

By Friday afternoon the death toll in Germany alone stood above 100, with fatalities in neighboring countries making the total death toll more than 125, according to authorities.

CBS News’ Anna Noryskiewicz in Berlin said thousands of residents in Germany’s North Rhine-Westphalia and Rhineland-Palatinate states had been forced to evacuate their homes, while 165,000 were left without electricity.

As the floodwaters started to recede on Friday, thousands of rescue workers, including 850 German soldiers, were taking part in the salvage operation. The full extent of the damage remained unclear as teams started to access entire towns that had been cut off by the floodwaters.

In the once quiet and picturesque village of Schuld, one shocked resident looking over the debris left behind called it “unreal.”

But for so many people, the devastation is all too real. The amount of rain that fell over 48 hours was double what normally would have fallen for the entire month of July.

“I grieve for those who have lost their lives in this disaster,” said German Chancellor Angela Merkel, who is in Washington this week for meetings with President Joe Biden. “We still don’t know the number, but it will be many.”

The battered nation is still bracing itself for the worst as more victims are discovered amid the rubble of buildings, trees and twisted metal from vehicles and anything else that tried to stand in the way of the water.

Already the scale of the disaster has shocked even climate scientists, including Ralf Toumi of the Imperial College of London.

“To me the most striking thing here is you have one of the richest countries in the world being caught out,” Toumi told CBS News. “It’s quite disturbing that it suggests that no one is really safe, because it can happen anywhere, anytime.”

Neighboring countries Belgium the Netherlands and Luxembourg have also been badly affected, with several villages still cut off by flood waters and landslides.

Dramatic video surfaced on Friday of the mayor of a small town in Belgium being interviewed on television about the flooding as a building behind him partially collapsed. Two men on the roof could be seen jumping from that building to one next door as a huge section of ground-floor exterior wall gave way and water came gushing through.